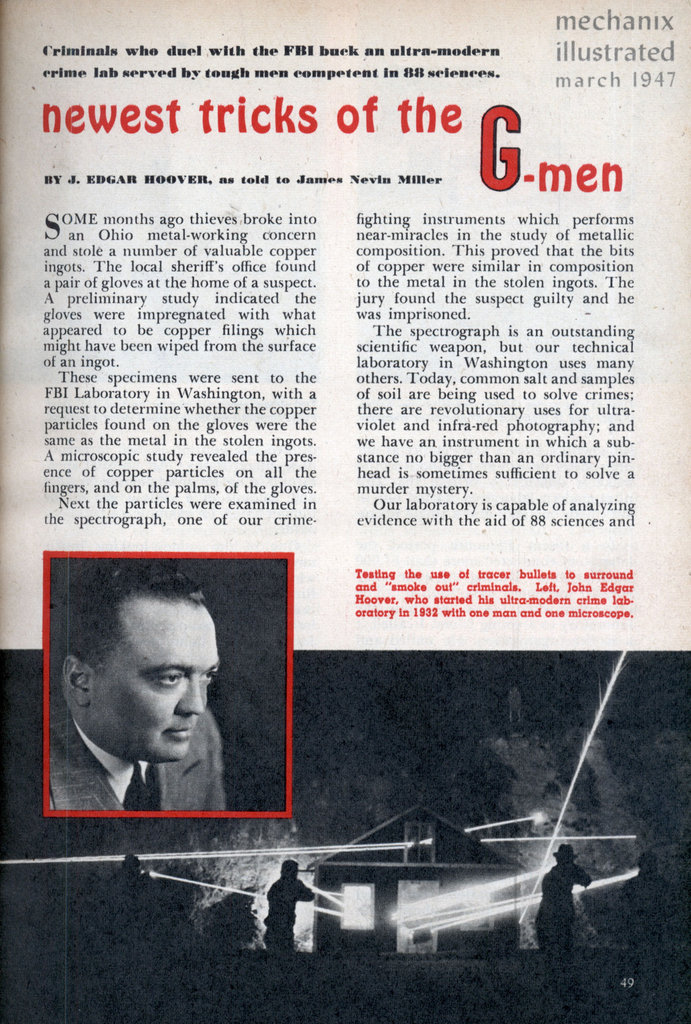 These specimens were sent to the FBI Laboratory in Washington, with a request to determine whether the copper particles found on the gloves were the same as the metal in the stolen ingots. A microscopic study revealed the presence of copper particles on all the fingers, and on the palms, of the gloves.

Next the particles were examined in the spectrograph, one of our crime- fighting instruments which performs near-miracles in the study of metallic composition. This proved that the bits of copper were similar in composition to the metal in the stolen ingots. The jury found the suspect guilty and he was imprisoned.

The spectrograph is an outstanding scientific weapon, but our technical laboratory in Washington uses many others. Today, common salt and samples of soil are being used to solve crimes; there are revolutionary uses for ultraviolet and infra-red photography; and we have an instrument in which a substance no bigger than an ordinary pin-head is sometimes sufficient to solve a murder mystery.

Our laboratory is capable of analyzing evidence with the aid of 88 sciences and sub-sciences. Even a hasty glance at our present-day devices and methods would make it difficult to believe that this ultra-modern laboratory started out in 1932 with one man and a single microscope!

In a recent 12-month period the laboratory conducted more than 67,000 examinations. During this time some 100,000 specimens were studied. The other day when I was describing the laboratory to a young friend I called it a service organization. He smiled and said, “The guys at school like to think of it as Ail-American.”

This youngster made a statement that is literally true. Since the laboratory’s humble beginning only 15 years ago, we have made its ever-growing facilities available not only to all other Federal agencies, but also to all the nation’s duly constituted law enforcement bodies in order to supplement and strengthen their vital work of criminal investigation.

It is surprising to find that a substance as common as ordinary table salt has an indispensable place in the FBI Laboratory. It is used constantly in biochemical examinations conducted with reference to evidence submitted to the Laboratory. For example, it is often necessary to remove dried blood stains from clothing or murder weapons. A diluted salt solution is used to remove these blood stains. An unusual apparatus is in use for analyzing the presence and amount of a certain gas in the human blood, for example, carbon monoxide.

One of our oddest-looking instruments is the metallograph, a microscope which uses vertical illumination to furnish the light by which the specimen is examined. In the conventional medical type microscopes, the sample is illuminated by light passing from the lower portion of the instrument up through the specimen and into the eyepiece. Since metal is opaque, obviously this system of lighting cannot be used. For the technician of today, science has designed the metallograph in which light is directed straight onto the specimen from the inside of the microscope tube. A study of the metal grain structures by the metallographer reveals many important criteria which we use in conducting our metal examinations, such as heat treatment, grain size, identification and distribution of inclusions, and identification of micro-constituents.

As I mentioned earlier, the spectrograph in one of our finest crime-solving instruments. In this piece of equipment a specimen is burned. The light emitted is broken up into its component wave lengths, which are then photographed. The resulting photographic plate permits the laboratory technician to identify with great precision the individual elements in the burned specimen.

Extreme sensitiveness is the highlight of the spectrographs method. It permits the detection, and an estimation of the amount, of elements present in such minute quantities that they would be inappreciable if sought by the more conventional methods. Even a sample the size of a pinhead will often be sufficient for a thorough spectrographic analysis. Another advantage of the method is its remarkable speed. Two paint samples involved in a recent hit-and-run case were analyzed and the answer wired to the sender within two hours of receipt of the evidence. In some cases it is possible to verify within 15 minutes the presence or absence of a particular element, thanks to this truly marvelous device.

Another promising newcomer in the field of scientific crime detectionâ€”and incidentally, a scientific relative of the spectrographâ€”is the X-ray spectrometer. It is excellent in identifying crystalline substances. The method involves the reflection of X-rays off the specimen. The location and intensity of the deflected X-rays are detected by the use of a Geiger-Mueller counter, the same type of device used at Bikini and elsewhere to determine the presence of radiation caused by atomic bombs and other radioactive material. The counter is so sensitive that it will measure the radiations from a luminous dial on a wrist watch.

More and more emphasis today is being placed on soil and minerals as an aid in solving crimes of extreme violence. In this connection we have a valuable aid in the petrographic microscope, now in constant use for analyzing soil specimens. For an example of its use: Some time ago the police chief of Rocky Mount, N. C, took to FBI officials in Washington a number of exhibits secured in a study by his office of a puzzling assault case.

During the local investigation several articles of clothing were found in the accused’s home. These were among the exhibits brought to the FBI Laboratory for study. Our examinations disclosed the presence of human blood on a shirt, a pair of trousers and a sweater. The Laboratory technicians also found human blood on a piece of wood which had been used as a club. It is noteworthy that the blood found on the trousers was chicken blood. However, the FBI tests proved conclusively that besides chicken blood, human blood also was present.

A hair removed from the club was found to correspond to head hair of the victim. Soil specimens were removed from the hat, trousers and shoes which had been taken from the suspect’s home. These were compared, with the aid of the petrographic microscope, with soil specimens taken at the scene of the crime and were found to be similar in appearance and microscopically alike in all respects.

During the trial the results of the FBI Laboratory examinations were made available to the court. The Rocky Mount police chief said that with these . results the State was able to present its case very effectively. The defendant was found guilty.

More and more in recent months our Laboratory technicians have been stressing hair and fiber evidence as an aid in solving puzzling crimes. A big reason for their outstanding success in this type of work is the use of the comparison microscope. It makes possible the comparison, under high magnification, of questioned and known hair and fiber specimens. This means that the specialists are able to utilize to conclusive advantage, evidence which requires detailed analysis of clues which at first glance might seem sketchy and inconclusive.

Time and again the Laboratory researchers have been able to assist in the identification of criminals by means of hair and fiber evidence. This is now possible largely because the comparison microscope reveals such characteristics as color, scale structure, diameter and distribution of pigmentation.

One of our most valuable tools is infra-red photography. By it, surface alterations invisible to the naked eye may be revealed. Certain inks are practically transparent to the infra-red rays, whereas other inks are opaque, thus making it possible to photograph through the one ink and not the other. Even invisible residue traces of certain types of inks below the surface of the paper or other material, oftentimes can be disclosed in clear-cut detail by infrared photography.

Take the case of a leather money bag found on the person of a notorious safe-blower who was captured in an Eastern city by FBI Agents. He was under suspicion not. only of stealing a car but also of being active in recent bank robberies. Also among the man’s possessions were found sticks of dynamite, numerous weapons and a supply of nitroglycerin.

Visual examination of the money bag disclosed no identifying data which would aid in tracing it. However, a few minutes of infra-red photography on the part of FBI Laboratory technicians clearly disclosed the name of a New Jersey bank from which it was stolen. As a result, not only was the car theft . solved, but also a puzzling bank robbery that had occurred some weeks earlier.

Another effective “light” weapon we use in our scientific crime detection is the ultra-violet lamp, used to identify certain substances which have a characteristic fluorescence. For example, certain quinine salts have a bright bluish fluorescence. The chemicals used to erase writing from documents often cause a difference in the fluorescence of the document and this can be detected when placed under the ultra-violet lamp. Small smears of greasy material found on suspect’s clothing can be seen very readily under the lamp.

Many biological specimens fluoresce strongly under the u-v lamp. Examples are bones, teeth and urine. Obviously such a characteristic is of great value in the examination of evidence concerning crimes against the person. In cases of criminal assault, for instance, the lamp often is of aid in locating stains on articles connected with the offense. It is of course difficult to detect minor stains on blankets, sheets or underclothing with the naked eye. Under the ultraviolet rays the smears glow.

Thank to ultra-violet detection procedures, one of the biggest bank robbery cases in history was solved by the FBI. The only clue was an employee’s identification badge. The badge had been doctored up, but u-v revealed the name of the man to whom it had originally been issued, and that man was tracked down and found guilty.