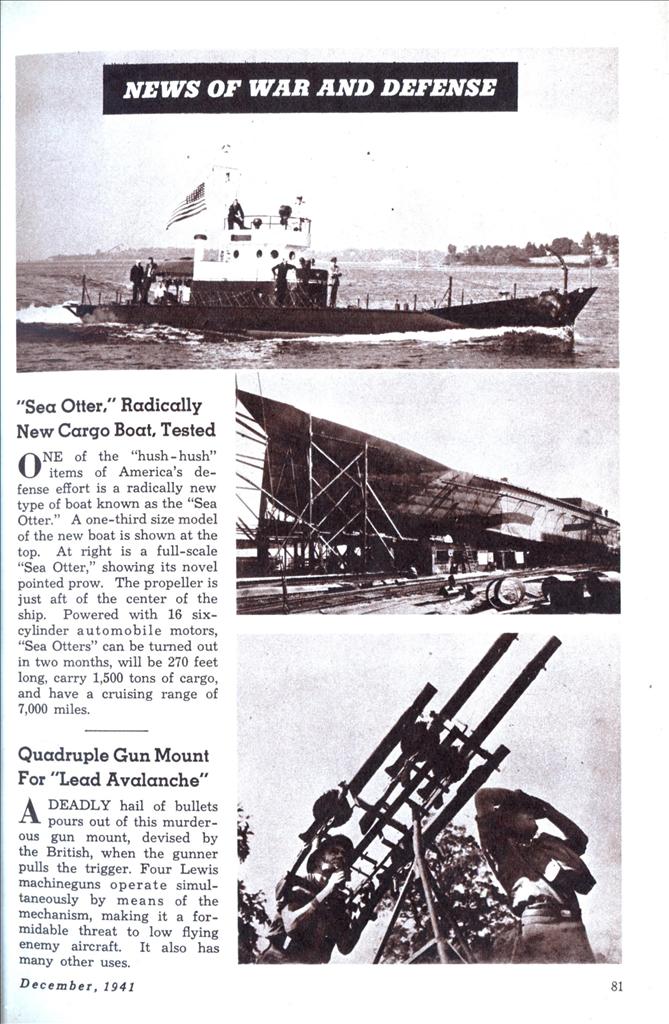 NEWS OF WAR AND DEFENSE

ONE of the “hush-hush” items of America’s defense effort is a radically new type of boat known as the “Sea Otter.” A one-third size model of the new boat is shown at the top. At right is a full-scale “Sea Otter,” showing its novel pointed prow. The propeller is just aft of the center of the ship. Powered with 16 six-cylinder automobile motors, “Sea Otters” can be turned out in two months, will be 270 feet long, carry 1,500 tons of cargo, and have a cruising range of 7,000 miles.

A DEADLY hail of bullets pours out of this murderous gun mount, devised by the British, when the gunner pulls the trigger. Four Lewis machineguns operate simultaneously by means of the mechanism, making it a formidable threat to low flying enemy aircraft. It also has many other uses.

THE first 90 millimeter anti-aircraft gun ever built by private industry in America is shown here as it was inspected by army officers. The gun, as shown in the picture below, is constructed so that it will fold up almost as quickly as a jackknife snaps shut into position to be hauled by speeding truck. It was turned out by Allis-Chambers Co.

THIS striking photograph of new units of the revitalized U.S. Army in action shows three planes strafing a pontoon bridge across the Wateree river in South Carolina. A jeep crew with machine-gun and automatic rifle in the foreground set up protective fire.

HERE, in the illustration above, is a famous designer’s idea of how the battleship of the future will look. Its decks, gun-turrets and superstructure streamlined, the ship will offer no flat surfaces to enemy projectiles, and it will be much faster than modern vessels. The design is by George W. Walker.

EFFICIENCY of English sea-fighters has been vastly increased by the daring naval achievement pictured here. Huge floating docks were constructed in English shipyards and towed hundreds of miles out into the Atlantic Ocean by a group of tiny tugboats. During the Bismarck battle, wounded British destroyers and cruisers were repaired almost on the scene of the naval duel.

THE Martin XPB-2-M-1, built for the U. S. Navy, surpassed in size only by the Army’s B-19, comes out of her hangar for the first time at Baltimore, Md. A Culver Cadet is shown in front of her to make a comparison in size. She weighs 70 tons.

JOHN HODGSON, a Mare Island and Navy Yard engineer, has developed the queer looking aerial weapon shown at the left, and the army is now testing it. It is a winged torpedo operating on a gyroscope principle and is designed to fly at 30,000 foot altitudes carrying a full load of bombs. Its inventor claims it may be sent diving at an enemy position by means of radio control waves. Inventor is shown at the left,’ with Bob Poison, the builder.