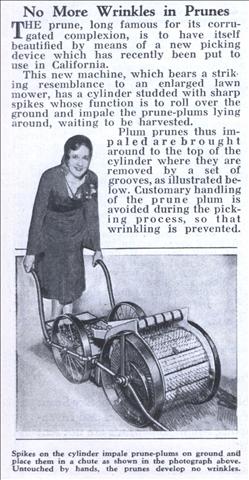 No More Wrinkles in Prunes
THE prune, long famous for its corrugated complexion, is to have itself beautified by means of a new picking device which has recently been put to use in California.

This new machine, which bears a striking resemblance to an enlarged lawn mower, has a cylinder studded with sharp spikes whose function is to roll over the ground and impale the prune-plums lying around, waiting to be harvested.

Plum prunes thus impaled are brought around to the top of the cylinder where they are removed by a set of grooves, as illustrated below. Customary handling of the prune plum is avoided during the picking process, so that wrinkling is prevented.