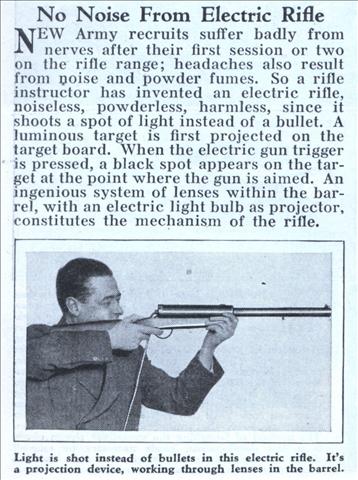 No Noise From Electric Rifle

NEW Army recruits suffer badly from nerves after their first session or two on the rifle range; headaches also result from noise and powder fumes. So a rifle instructor has invented an electric rifle, noiseless, powderless, harmless, since it shoots a spot of light instead of a bullet. A luminous target is first projected on the target board. When the electric gun trigger is pressed, a black spot appears on the target at the point where the gun is aimed. An ingenious system of lenses within the barrel, with an electric light bulb as projector, constitutes the mechanism of the rifle.