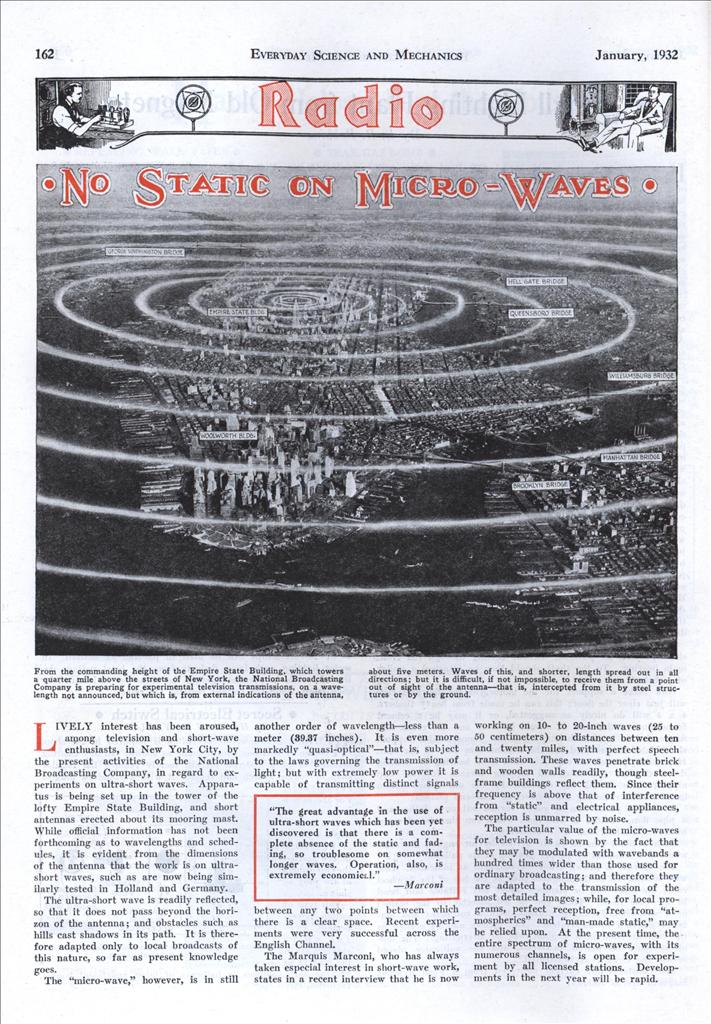 The ultra-short wave is readily reflected, so that it does not pass beyond the horizon of the antenna; and obstacles such as hills cast shadows in its path. It is therefore adapted only to local broadcasts of this nature, so far as present knowledge goes.

The “micro-wave,” however, is in still another order of wavelength—less than a meter (39.37 inches). It is even more markedly “quasi-optical”—that is, subject to the laws governing the transmission of light; but with extremely low power it is capable of transmitting distinct signals between any two points between which there is a clear space. Recent experiments were very successful across the English Channel.

The Marquis Marconi, who has always taken especial interest in short-wave work, states in a recent interview that he is now working on 10- to 20-inch waves (25 to 50 centimeters) on distances between ten and twenty miles, with perfect speech transmission. These waves penetrate brick and wooden walls readily, though steel-frame buildings reflect them. Since their frequency is above that of interference from “static” and electrical appliances, reception is unmarred by noise.

The particular value of the micro-waves for television is shown by the fact that they may be modulated with wavebands a hundred times wider than those used for ordinary broadcasting; and therefore they are adapted to the transmission of the most detailed images; while, for local programs, perfect reception, free from “atmospherics” and “man-made static,” may be relied upon. At the present time, the entire spectrum of micro-waves, with its numerous channels, is open for experiment by all licensed stations. Developments in the next year will be rapid.

“The great advantage in the use of ultra-short waves which has been yet discovered is that there is a complete absence of the static and fading, so troublesome on somewhat longer waves. Operation, also, is extremely economical.”