I’m sure the starving villagers will be happy to know the actors refused to violate their age old tradition of not appearing in moves. 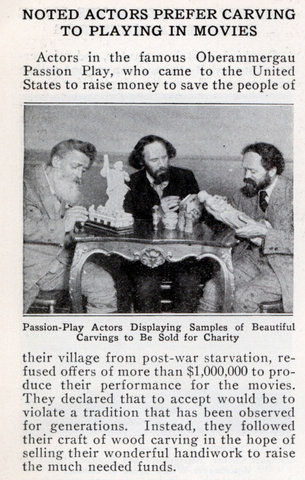 NOTED ACTORS PREFER CARVING TO PLAYING IN MOVIES
Actors in the famous Oberammergau Passion Play, who came to the United States to raise money to save the people of their village from post-war starvation, refused offers of more than $1,000,000 to produce their performance for the movies. They declared that to accept would be to violate a tradition that has been observed for generations. Instead, they followed their craft of wood carving in the hope of selling their wonderful handiwork to raise the much needed funds.