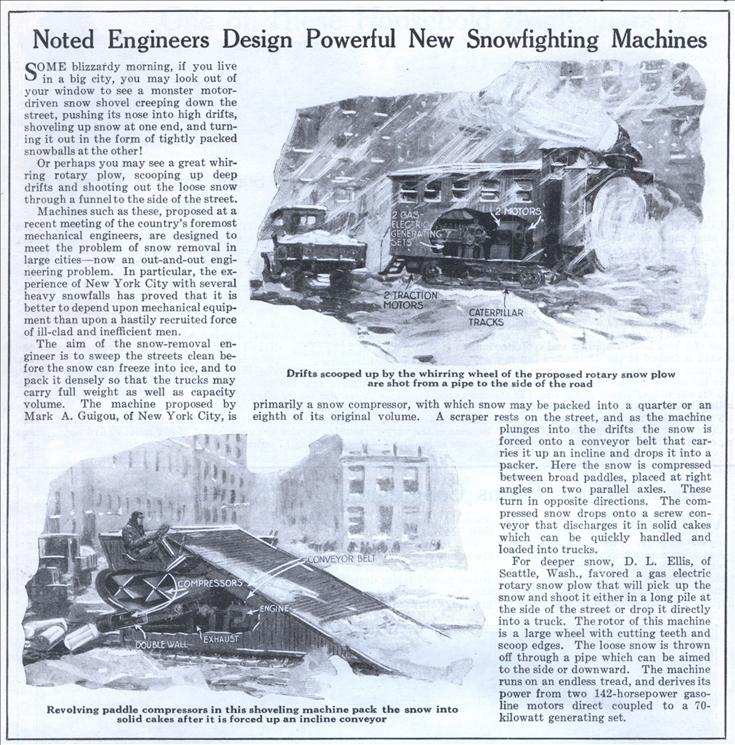 SOME blizzardy morning, if you live in a big city, you may look out of your window to see a monster motor-driven snow shovel creeping down the street, pushing its nose into high drifts, shoveling up snow at one end, and turning it out in the form of tightly packed snowballs at the other!

Or perhaps you may see a great whirring rotary plow, scooping up deep drifts and shooting out the loose snow through a funnel to the side of the street.

Machines such as these, proposed at a recent meeting of the country’s foremost mechanical engineers, are designed to meet the problem of snow removal in large cities—now an out-and-out engineering problem. In particular, the experience of New York City with several heavy snowfalls has proved that it is better to depend upon mechanical equipment than upon a hastily recruited force of ill-clad and inefficient men.

The aim of the snow-removal engineer is to sweep the streets clean before the snow can freeze into ice, and to pack it densely so that the trucks may carry full weight as well as capacity volume. The machine proposed by Mark A. Guigou, of New York City, is primarily a snow compressor, with which snow may be packed into a quarter or an eighth of its original volume. A scraper rests on the street, and as the machine plunges into the drifts the snow is forced onto a conveyor belt that carries it up an incline and drops it into a packer. Here the snow is compressed between broad paddles, placed at right angles on two parallel axles. These turn in opposite directions. The compressed snow drops onto a screw conveyor that discharges it in solid cakes which can be quickly handled and loaded into trucks.

For deeper snow, D. L. Ellis, of Seattle, Wash., favored a gas electric rotary snow plow that will pick up the snow and shoot it either in a long pile at the side of the street or drop it directly into a truck. The rotor of this machine is a large wheel with cutting teeth and scoop edges. The loose snow is thrown off through a pipe which can be aimed to the side or downward. The machine runs on an endless tread, and derives its power from two 142-horsepower gasoline motors direct coupled to a 70-kilowatt generating set.