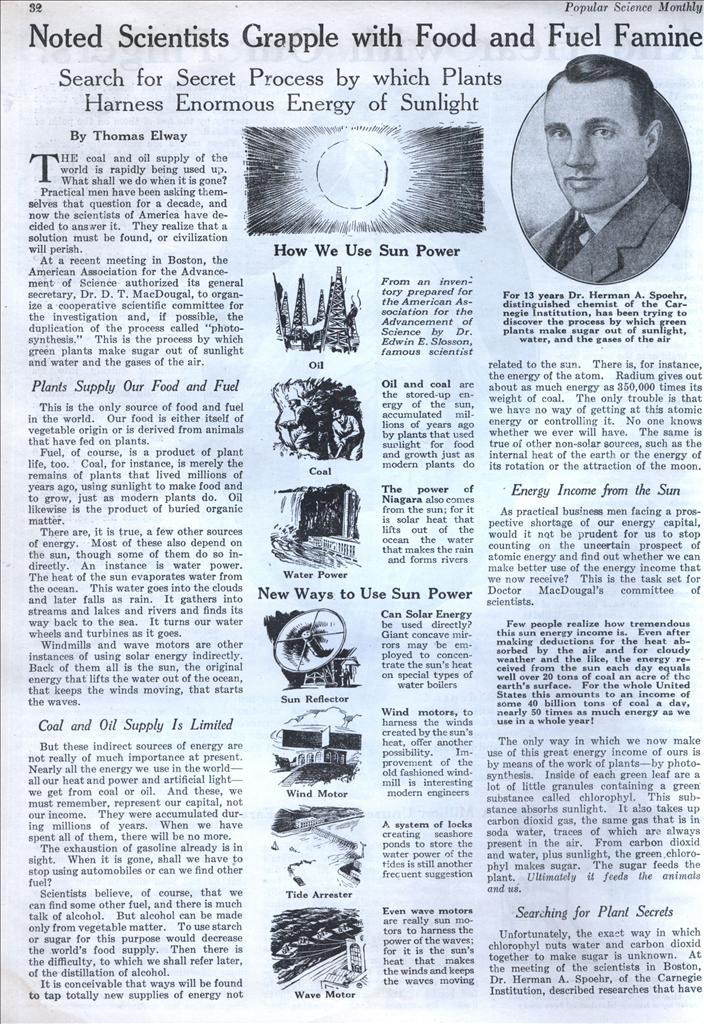 THE coal and oil supply of the , world is rapidly being used up. What shall we do when it is gone?

Practical men have been asking themselves that question for a decade, and now the scientists of America have decided to answer it. They realize that a solution must be found, or civilization will perish.

At a recent meeting in Boston, the American Association for the Advancement of Science authorized its general secretary, Dr. D. T. MacDougal, to organize a cooperative scientific committee for the investigation and, if possible, the duplication of the process called “photosynthesis.” This is the process by which green plants make sugar out of sunlight and water and the gases of the air.

Plants Supply Our Food and Fuel.

This is the only source of food and fuel in the world. Our food is either itself of vegetable origin or is derived from animals that have fed on plants.

Fuel, of course, is a product of plant life, too. Coal, for instance, is merely the remains of plants that lived millions of years ago, using sunlight to make food and to grow, just as modern plants do. Oil likewise is the product of buried organic matter.

There are, it is true, a few other sources of energy. Most of these also depend on the sun, though some of them do so indirectly. An instance is water power. The heat of the sun evaporates water from the ocean. This water goes into the clouds and later falls as rain. It gathers into streams and lakes and rivers and finds its way back to the sea. It turns our water wheels and turbines as it goes.

Windmills and wave motors are other instances of using solar energy indirectly. Back of them all is the sun, the original energy that lifts the water out of the ocean, that keeps the winds moving, that starts the waves.

Coal and Oil Supply Is Limited.

But these indirect sources of energy are not really of much importance at present. Nearly all the energy we use in the world— all our heat and power and artificial light— we get from coal or oil. And these, we must remember, represent our capital, not our income. They were accumulated during millions of years. When we have spent all of them, there will be no more.

The exhaustion of gasoline already is in sight. When it is gone, shall we have to stop using automobiles or can we find other fuel?

Scientists believe, of course, that we can find some other fuel, and there is much talk of alcohol. But alcohol can be made only from vegetable matter. To use starch or sugar for this purpose would decrease the world’s food supply. Then there is the difficulty, to which we shall refer later, of the distillation of alcohol.

It is conceivable that ways will be found to tap totally new supplies of energy not related to the sun. There is, for instance, the energy of the atom. Radium gives out about as much energy as 350,000 times its weight of coal. The only trouble is that we have no way of getting at this atomic energy or controlling it. No one knows whether we ever will have. The same is true of other non-solar sources, such as the internal heat of the earth or the energy of its rotation or the attraction of the moon.

Energy Income from the Sun.

As practical business men facing a prospective shortage of our energy capital, would it not be prudent for us to stop counting on the uncertain prospect of atomic energy and find out whether we can make better use of the energy income that we now receive? This is the task set for Doctor MacDougal’s committee of scientists.

Few people realize how tremendous this sun energy income is. Even after making deductions for the heat absorbed by the air and for cloudy weather and the like, the energy received from the sun each day equals well over 20 tons of coal an acre of the earth’s surface. For the whole United States this amounts to an income of some 40 billion tons of coal a day, nearly 50 times as much energy as we use in a whole year!

The only way in which we now make use of this great energy income of ours is by means of the work of plants—by photosynthesis. Inside of each green leaf are a lot of little granules containing a green substance called chlorophyl. This substance absorbs sunlight. It also takes up carbon dioxid gas, the same gas that is in soda water, traces of which are always present in the air. From carbon dioxid and water, plus sunlight, the green,chlorophyl makes sugar. The sugar feeds the plant. Ultimately it feeds the animals and us.

Unfortunately, the exact way in which chlorophyl outs water and carbon dioxid together to make sugar is unknown. At the meeting of the scientists in Boston, Dr. Herman A. Spoehr, of the Carnegie Institution, described researches that have kept him busy for 13 years in an effort to find out just how photosynthesis works. Carbon dioxid and water do not combine to make sugar when you merely mix them. Doctor Spoehr has not succeeded in persuading them to do so by any of the thousands of experiments he has tried.

It is certain, Doctor Spoehr thinks, that what goes on in the green plant is not a simple chemical reaction, easy to duplicate. It is very complicated. It involves several distinct chemical reactions going on side by side; and at least one of these reactions is related closely to the actual life of the plant. Dead plants are no good for photosynthesis.

If we are to duplicate what the leaf does, it will be necessary, Doctor Spoehr believes, to concentrate on this problem the best efforts of many scientific specialists, of physicists and biologists, of experts in radiant energy, and of chemists. That is why the official committee of the American Association was authorized.

The scientists who undertake this investigation will have the task not only of doing at least as well as the plant does. They will have to do far better, for the work of the plant is extremely inefficient. Of the tremendous amount of solar energy that falls each day on the earth’s surface, plants use only the tiniest fraction, probably not more than one thousandth of it, even in the tropics, where the growth of vegetation is at its best. Any process for the artificial making of sugar by sunlight must show a far higher efficiency than this or it will never be really useful.

Scientists are confident that this will be possible. Chemistry has bettered Nature’s processes often before. Indigo, for example, was formerly a plant product. Now it is made better and more cheaply in the chemical factory.

It is by no means impossible that before very many years we shall see factories for artificial food, as pictured on this page, springing up in desert areas where sunlight is unusually strong.

But these factories will be sugar factories only; they will not make motor fuel for us. It is true that the sugar might be made into alcohol, but the only way to do this is by means of yeast, and yeast has to work in water. How are we to separate the alcohol from the water?

This is done ordinarily by distillation, but distillation requires more heat than the fuel value of the alcohol you produce— a fact frequently forgotten by the persons who theorize about the possibilities of alcohol for fuel.

Probably a better solution will be some way of using the sun’s heat directly for distillation, or perhaps a method of making alcohol or some other combustible liquid out of sugar by a dry process, without using yeast at all.

How these problems will be solved, only time can tell. In any event, the work of the committee appointed in Boston holds as much interest for the general public as it does for the professional scientists.

How We Use Sun Power.

From an inventory prepared for the American Association for the Advancement of Science by Dr. Edwin E. Slosson, famous scientist.

Oil and coal are the stored-up energy of the sun, accumulated millions of years ago by plants that used sunlight for food and growth just as modern plants do.

The power of Niagara also comes from the sun; for it is solar heat that lifts out of the ocean the water that makes the rain and forms rivers.

New Ways to Use Sun Power.

Can Solar Energy be used directly? Giant concave mirrors may be employed to concentrate the sun’s heat on special types of water boilers.

Wind motors, to harness the winds created by the sun’s heat, offer another possibility. Improvement of the old fashioned windmill is interesting modern engineers.

A system of locks creating seashore ponds to store the water power of the tides is still another recent suggestion.

Even wave motors are really sun motors to harness the power of the waves; for it is the sun’s heat that makes the winds and keeps the waves moving.