Novel Appliances for the Household (Aug, 1933) 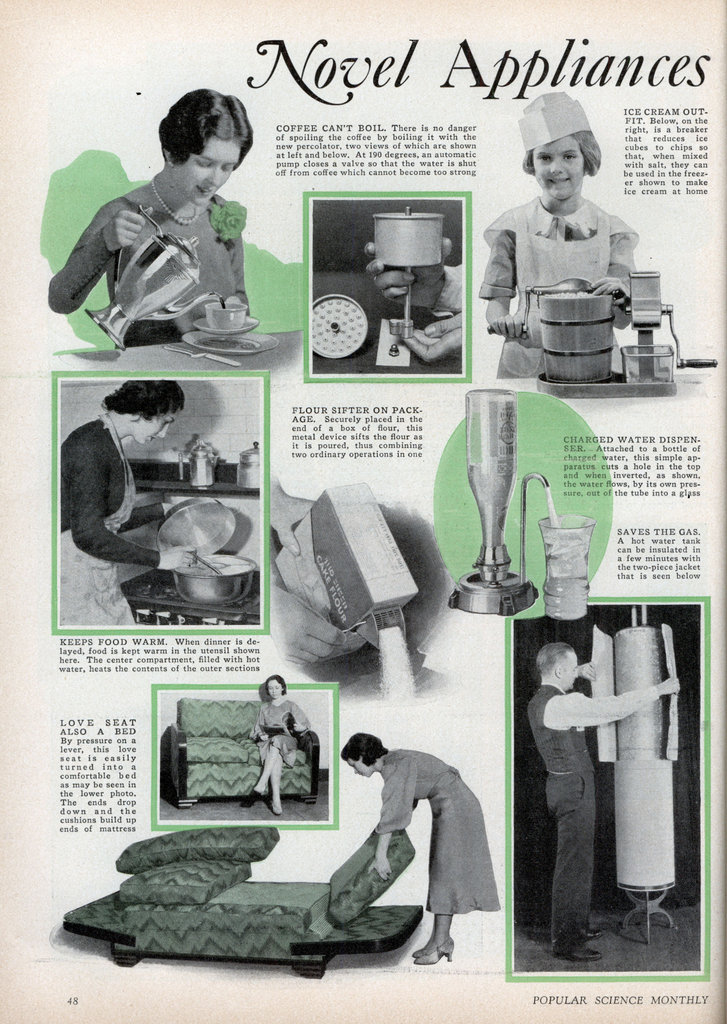 Novel Appliances for the Household

KEEPS FOOD WARM. When dinner is delayed, food is kept warm in the utensil shown here. The center compartment, filled with hot water, heats the contents of the outer sections

LOVE SEAT ALSO A BED By pressure on a lever, this love seat is easily turned into a comfortable bed as may be seen in the lower photo. The ends drop down and the cushions build up ends of mattress

COFFEE CAN’T BOIL. There is no danger of spoiling the coffee by boiling it with the new percolator, two views of which are shown at left and below. At 190 degrees, an automatic pump closes a valve so that the water is shut off from coffee which cannot become too strong

FLOUR SIFTER ON PACKAGE. Securely placed in the end of a box of flour, this metal device sifts the flour as it is poured, thus combining two ordinary operations in one

ICE CREAM OUTFIT. Below, on the right, is a breaker that reduces ice cubes to chips so that, when mixed with salt, they can be used in the freezer shown to make ice cream at home

CHARGED WATER DISPENSER. Attached to a bottle of charged water, this simple apparatus cuts a hole in the top and when inverted, as shown, the water flows, by its own pressure, out of the tube into a glass

SAVES THE GAS. A hot water tank can be insulated in a few minutes with the two-piece jacket that is seen below

HIGH CLOTHES HANGER. By means of a hook that slides up and down in a metal groove, clothes may be hung at top of a closet, thus increasing its capacity

RUGS MADE ON SEWING MACHINE. A knife-like blade, with a long slot in it, makes it possible to create heavy rugs on your sewing machine. Yarn is wound around the blade which is then placed under machine’s presser foot and stitched, as shown in photo at lower left. By repeating the operation, a rug like the one shown results when these strips of material are all sewed together

SILENT ELECTRIC FAN. Wide, over-lapping blades, that uniformly and silently move the air, take the buzz out of this electric fan without reducing its efficiency

WRINGER CAN’T GRAB FINGERS. Radically new in design, this clothes wringer has four rollers. It also has an automatic release that separates rolls and stops them instantly if one’s hands are caught

HOLDER FOR SPOONS. This little device, which slips readily over the edge of any cooking utensil, prevents the stirring spoon from falling into vessel

HEADLIGHT ON CLEANER. This new vac-uum cleaner carries a powerful electric lamp so light is thrown under furniture and into dark corners. Current is supplied by the same cord that runs the cleaner but a separate switch controls light so it can be turned on at will

PICTURES HUNG WITHOUT WIRES. This two-piece metal picture hanger makes it possible to hang pictures without hooks or wires. One piece fastens to the back of the picture and the other to the wall. When fitted together, they will support the picture