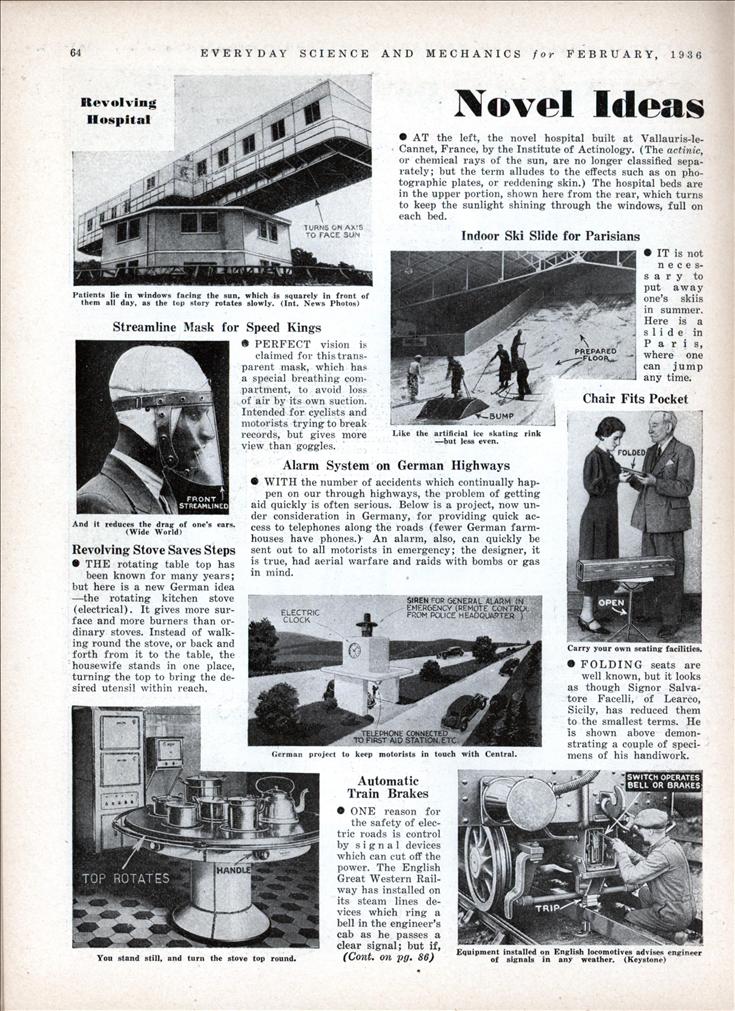 • AT the left, the novel hospital built at Vallauris-le-Cannet, France, by the Institute of Actinology. (The actinic, or chemical rays of the sun, are no longer classified separately; but the term alludes to the effects such as on photographic plates, or reddening skin.) The hospital beds are in the upper portion, shown here from the rear, which turns to keep the sunlight shining through the windows, full on each bed.

• PERFECT vision is claimed for this transparent mask, which has a special breathing compartment, to avoid loss of air by its own suction. Intended for cyclists and motorists trying to break records, but gives more view than goggles.

• THE rotating table top has been known for many years; but here is a new German idea —the rotating kitchen stove (electrical). It gives more surface and more burners than ordinary stoves. Instead of walking round the stove, or back and forth from it to the table, the housewife stands in one place, turning the top to bring the desired utensil within reach.

• WITH the number of accidents which continually happen on our through highways, the problem of getting aid quickly is often serious. Below is a project, now under consideration in Germany, for providing quick access to telephones along the roads (fewer German farmhouses have phones.)- An alarm, also, can quickly be sent out to all motorists in emergency; the designer, it is true, had aerial warfare and raids with bombs or gas in mind.

• IT is not necessary to put away one’s skiis in summer. Here is a slide in Paris, where one can jump any time.

• FOLDING seats arc well known, but it looks as though Signor Salvatore Facelli, of Learco, Sicily, has reduced them to the smallest terms. He is shown above demonstrating a couple of specimens of his handiwork.

• ONE reason for the safety of electric roads is control by signal devices which can cut off the power. The English Great Western Railway has installed on its steam lines devices which ring a bell in the engineer’s cab as he passes a clear signal; but if, in the fog, he should go by a signal set to stop him, the trip on the engine would operate the switch, sounding a siren in the cab and applying the air brakes without the intervention of the engineer.

• THIS, the world’s smallest brewery, is not for home brewers, however, but for technicians. It is in stainless steel, and embodies four units, each of which will produce three pints (British) an hour. By this, methods and materials can be tested on a small scale.

• WE have shown quite a number of rather freakish cycles lately. They keep on coming, as these two illustrations from England show. That at the right is called the Cycloratio, and seems well fitted for an acrobat. None, however, have attained great popularity.

• THE pyrotechnician pictured above, who calls himself “Blondin” (after the tight-rope expert who crossed Niagara Falls), defies fire, instead of water, at London carnivals, and should be in good practice for flame warfare when that becomes more general. In his act, he crosses a tight rope. It is a rather dangerous one, in spite of all the precaution that may be taken; but that is part of a “daredevil’s” life.

• THE lamp above, just produced in Europe, gives the light of an arc without its heat, and is extremely efficient; but its green color restricts its use. It is 1,000 candle power. The mercury is in a capillary tube, and passes a much more concentrated current than that in the well-known mercury-vapor lamps of photographers.

• MECHANICAL erector sets, suggested by steel structures, have given a hint back to engineers. The material shown may be assembled quickly from stock to form any temporary structure, and secured together by its special hooks. Then the stair, grandstand or what have you is taken down again easily.