NOVEL NEW MACHINES for PULLING POWER from the SKIES (Apr, 1933) 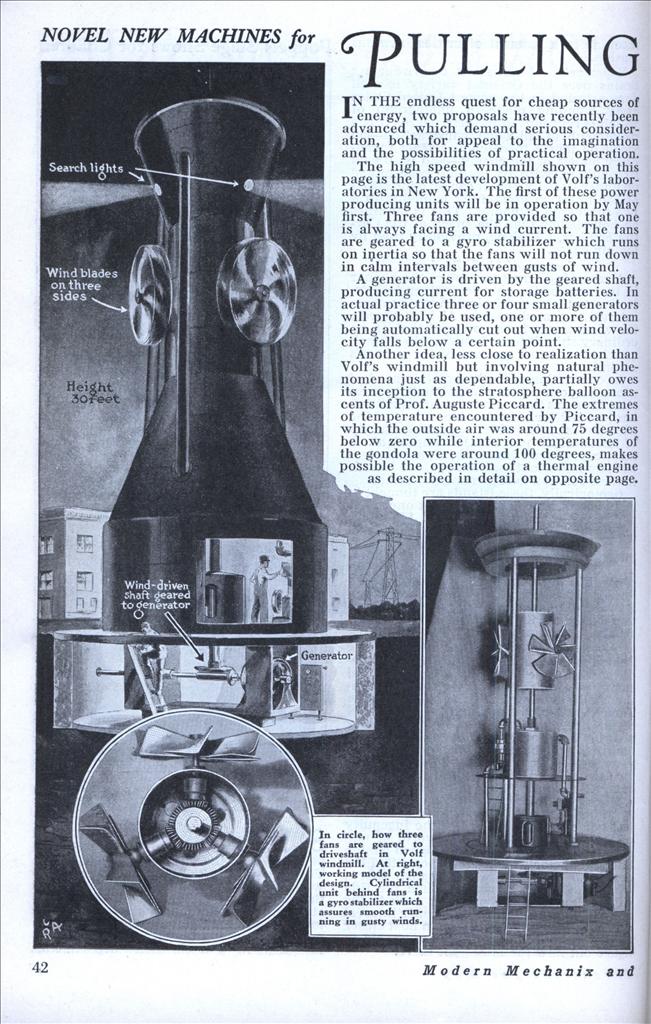 NOVEL NEW MACHINES for PULLING POWER from the SKIES

IN THE endless quest for cheap sources of energy, two proposals have recently been advanced which demand serious consideration, both for appeal to the imagination and the possibilities of practical operation.

The high speed windmill shown on this page is the latest development of Volf’s laboratories in New York. The first of these power producing units will be in operation by May first. Three fans are provided so that one is always facing a wind current. The fans are geared to a gyro stabilizer which runs on inertia so that the fans will not run down in calm intervals between gusts of wind.

A generator is driven by the geared shaft, producing current for storage batteries. In actual practice three or four small generators will probably be used, one or more of them being automatically cut out when wind velocity falls below a certain point.

Another idea, less close to realization than Volf’s windmill but involving natural phenomena just as dependable, partially owes its inception to the stratosphere balloon ascents of Prof. Auguste Piccard. The extremes of temperature encountered by Piccard, in which the outside air was around 75 degrees below zero while interior temperatures of the gondola were around 100 degrees, makes possible the operation of a thermal engine as described in detail on opposite page.