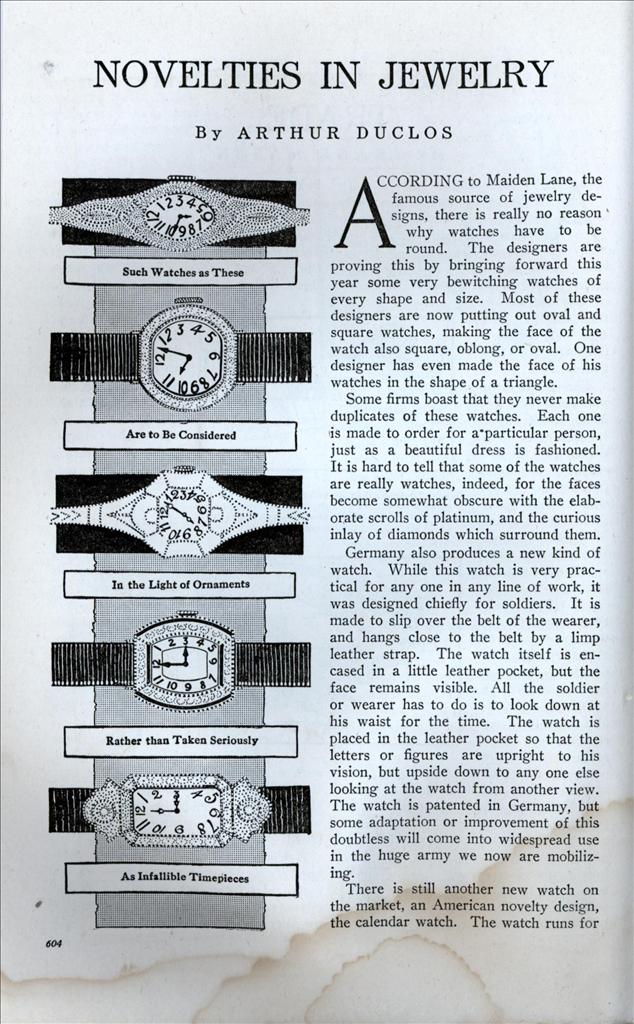 ACCORDING to Maiden Lane, the famous source of jewelry designs, there is really no reason ‘ why watches have to be round. The designers are proving this by bringing forward this year some very bewitching watches of every shape and size. Most of these designers are now putting out oval and square watches, making the face of the watch also square, oblong, or oval. One designer has even made the face of his watches in the shape of a triangle.

Some firms boast that they never make duplicates of these watches. Each one is made to order for a particular person, just as a beautiful dress is fashioned. It is hard to tell that some of the watches are really watches, indeed, for the faces become somewhat obscure with the elaborate scrolls of platinum, and the curious inlay of diamonds which surround them.

Germany also produces a new kind of watch. While this watch is very practical for any one in any line of work, it was designed chiefly for soldiers. It is made to slip over the belt of the wearer, and hangs close to the belt by a limp leather strap. The watch itself is encased in a little leather pocket, but the face remains visible. All the soldier or wearer has to do is to look down at his waist for the time. The watch is placed in the leather pocket so that the letters or figures are upright to his vision, but upside down to any one else looking at the watch from another view. The watch is patented in Germany, but some adaptation or improvement of this doubtless will come into widespread use in the huge army we now are mobilizing.

There is still another new watch on the market, an American novelty design, the calendar watch. The watch runs for eight days without winding, and shows the days of the week, besides the hours, minutes, and seconds.

A very dainty La Valliere, of American design, also comes out as a novelty this year. It is not merely the daintiest of its kind, however, for it has two purposes, one for decoration, and another for satisfying the individual whim for perfume or sachet. There is a minute spring at the top of the locket which opens, and inside is a microscopic piece of white soft felt held in place by a tiny gold clamp. The wearer drops her favorite toilet water or perfume on this little piece of felt, and closes the locket. In the sides of the locket, covered almost completely by clever filigree design, are small perforations which allow the perfume to escape in just sufficient quantity to make itself suspected, without satiating by unmistakable conviction.

A novel cuff button and tie pin called “ammunition style” are also on the market, but presumably they will be worn more by the men who stay at home than by the soldiers, as is always the case with warlike decorations of this type.

For the man who is cranky about the light when he is shaving—and where will we find the man who is a saint to his safety razor?—there is a new mirror designed. It folds in and fits the coat pocket, and when opened, the holder attached to it can be fastened firmly to any electric light bulb. The shaver can fold the holder so that the mirror will strike almost any angle desired and get the right lighting effect. It can also be attached just as easily to a gas bracket. Although a finicky person might ask most naturally, “But what has this contrivance to do with jewelry?”, we believe that its presence here is excused by the fact that every man of hirsute facial tendencies who gives it a trial will pronounce it “a jewel”.

In the strict jewelry lines, however, the tendency this year seems to be away from the practical and toward the more ornamental and fantastic; and this is as it should be.