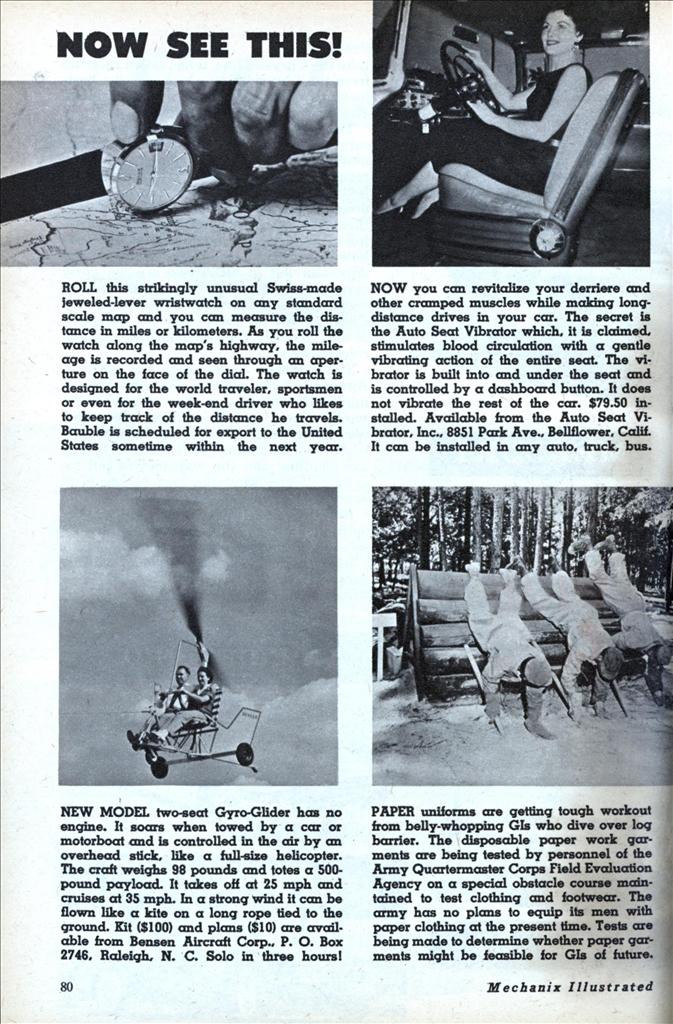 ROLL this strikingly unusual Swiss-made jeweled-lever wristwatch on any standard scale map and you can measure the distance in miles or kilometers. As you roll the watch along the map’s highway, the mileage is recorded and seen through an aperture on the face of the dial. The watch is designed for the world traveler, sportsmen or even for the week-end driver who likes to keep track of the distance he travels. Bauble is scheduled for export to the United States sometime within the next year.

NEW MODEL two-seat Gyro-Glider has no engine. It soars when towed by a car or motorboat and is controlled in the air by an overhead stick, like a full-size helicopter. The craft weighs 98 pounds and totes a 500-pound pay load. It takes off at 25 mph and cruises at 35 mph. In a strong wind it can be flown like a kite on a long rope tied to the ground. Kit ($100) and plans ($10) are available from Bensen Aircraft Corp., P. O. Box 2746, Raleigh, N. C. Solo in three hours!

PAPER uniforms are getting tough workout from belly-whopping GIs who dive over log barrier. The disposable paper work garments are being tested by personnel of the Army Quartermaster Corps Field Evaluation Agency on a special obstacle course maintained to test clothing and footwear. The army has no plans to equip its men with paper clothing at the present time. Tests are being made to determine whether paper garments might be feasible for GIs of future.