Popular Science
Issue: Nov, 1968
Posted in: Ahead of its time, Computers
6 Comments on Now They’re Printing TRANSISTORS ON PAPER! (Nov, 1968)

I’m not sure what happened with this, but people are now making transistors where paper is actually a functional part of the device. 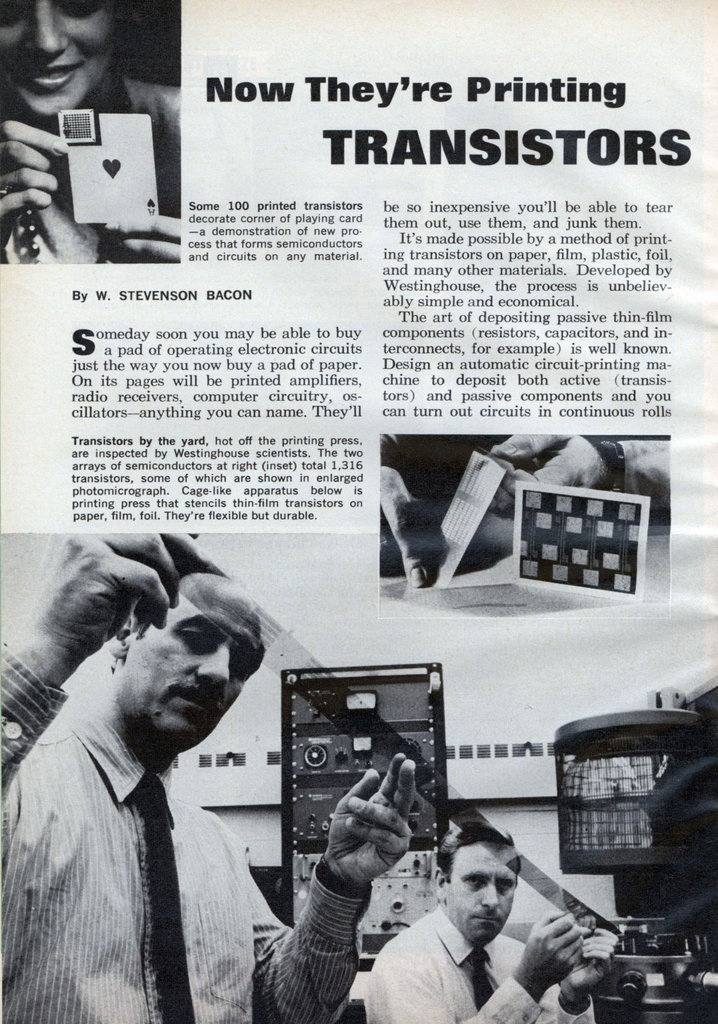 Flexible circuits printed by machine on paper, aluminum foil, or film may make possible cheap, disposable radios, hi-fi’s, and many other electronic devices.

Someday soon you may be able to buy a pad of operating electronic circuits just the way you now buy a pad of paper. On its pages will be printed amplifiers, radio receivers, computer circuitry, oscillators—anything you can name. They’ll be so inexpensive you’ll be able to tear them out, use them, and junk them.

It’s made possible by a method of printing transistors on paper, film, plastic, foil, and many other materials. Developed by Westinghouse, the process is unbelievably simple and economical.

The art of depositing passive thin-film components (resistors, capacitors, and interconnects, for example) is well known. Design an automatic circuit-printing machine to deposit both active (transistors) and passive components and you can turn out circuits in continuous rolls for just pennies. Here are only a few of the possibilities:

• Credit and data cards, documents, checks, and other papers with flexible printed-component circuits will help speed identification and processing.

• Revolutionary new medical devices that can be implanted in the body will, for the first time, become really practical.

• A narrow-band TV system that can operate over ordinary telephone lines could become a reality. Such a project is now under way.

• Textbooks and teaching aids, toys, hobby kits, novelties will be based on flexible circuits.

How it’s done. Thin-film components are made in a vacuum chamber by vaporizing conductors and other materials and then depositing them in layers on an ultrasmooth base. Thin-film transistors, a relatively recent development, go a step further. A sandwich of metals, insulators and semiconductors is laid down in several steps.

Until recently, it was thought that the base had to be an expensive, polished insulating material such as sapphire, quartz, or glass.

What is new is that Westinghouse researchers, headed by Drs. T. P. Brody and Derrick J. Page, have discovered that transistors and other components can be deposited on almost anything. Another first: By using a stenciling method, they deposit hundreds of transistors simultaneously with a single “pump-down” of a vacuum chamber. Formerly it was necessary to deposit each transistor layer separately, pumping out each time.

Printing press for circuits. So simple is the new process that it should lend itself to automation—machines that automatically turn out millions of circuits a year. According to Dr. Brody, such a machine would wind a roll of tape through a printing station, a testing station, and an encapsulating station, and onto a takeup roll—just like a movie camera.

At the printing station, transistors would be formed by depositing on the tape, in sequence, layers of gold, tellurium (the semiconductor), glass, and aluminum. Passive components would be similarly formed.

After the circuits were tested, they would be sealed with covering tape brought up from another roll, then wound onto a takeup reel. Final step, with the run complete, would be to remove the reel and slice it into individual circuits.

So far, paper transistors have proved versatile and reliable for any device that does not have to operate at high temperature, power, or very-high frequencies. About the size of the crossbar on this letter “t” and much thinner than the layer of ink used to print it, they have been operated for more than 1,000 hours with no measurable loss. They can be bent, twisted, and coiled. Cut them in half, and you have two transistors.