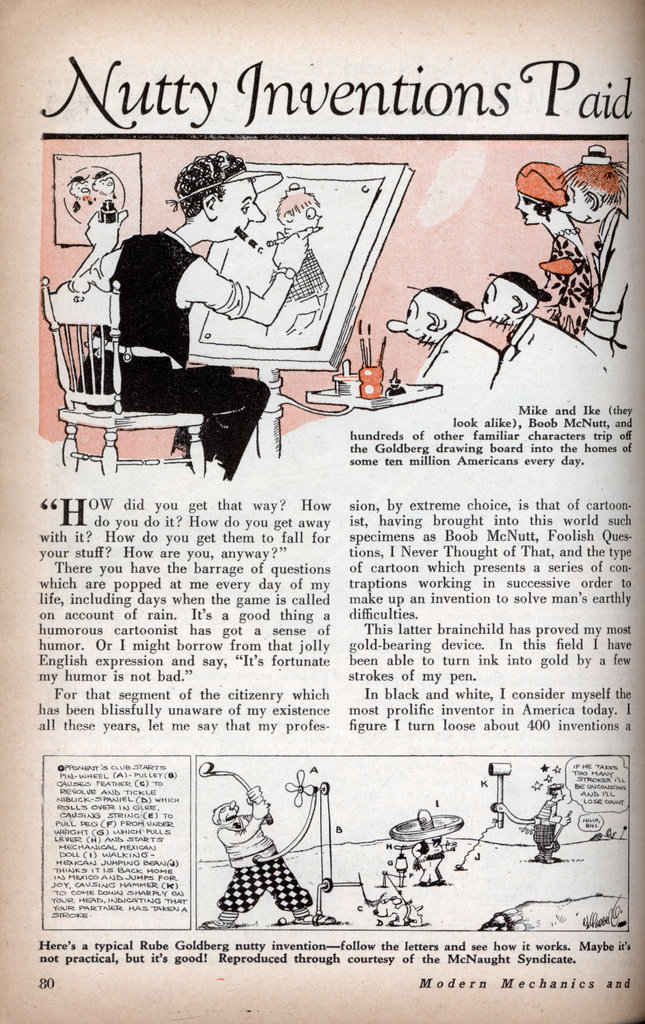 For that segment of the citizenry which has been blissfully unaware of my existence all these years, let me say that my profession, by extreme choice, is that of cartoonist, having brought into this world such specimens as Boob McNutt, Foolish Questions, I Never Thought of That, and the type of cartoon which presents a series of contraptions working in successive order to make up an invention to solve man’s earthly difficulties.

This latter brainchild has proved my most gold-bearing device. In this field I have been able to turn ink into gold by a few strokes of my pen.

In black and white, I consider myself the most prolific inventor in America today. I figure I turn loose about 400 inventions a year. And mine are not simple pieces of apparatus, either. As I gaze upon an invention, done in ink, of course, of an appliance which a husband may wear at the dinner table, I would guess that a first class engineer would have to spend a whole month in a machine shop before he could make the living and breathing duplicate.

This bit of mechanical folderol which I am now perusing looks like a strait-jacket which is strapped around a man’s body after he is seated at table. Jutting out from its sides are prongs and clampers which permit him to eat his soup with his right hand, hold his bread in his left, while the other gadgets are automatically pouring the coffee, putting two pieces of sugar in the cup, then the cream, holding the plates for the next course aloft, and directing things and the wife in general.

You’ve got to admit that’s an invention that any man could use. Especially when he gets home from a heavy day’s work and is famished and his fraulein fetches the fodder at a snail’s pace. To slap together that “Quick Lunch” machine for everyday use would run into money. So the farthest it gets is in print. My invention in ink goes out to about ten million newspaper and magazine readers.

Most of the time I wrestle with very human problems. I spent a long time inventing an instrument for removing olives from long-necked bottles. Then there was another one for retrieving soap which slipped away from you in the bath-tub. I’ve got to admit, however, that there’s one stickler that I haven’t been able to overcome yet. That is, how to get your nickel back from a telephone coin box after you’ve failed to get a number.

I don’t suppose I could make any one believe that I draw up all those crazy inventions without having had a knowledge of mechanics and having spent considerable time in the engineering field. If the truth must be told, my own private mechanical series started in the flesh with a course in the College of Mining at the University of California.

I went through a lot of processes myself and I came out of the other end a full-fledged mechanical engineer. I got a job in the City Engineer’s office in San Francisco at $100 a month. My job was mapping sewer pipes and water-mains. And when you folks out front there behold my mechanical jig-a-ma-jigs with a lot of pipes in them, you can remain calm and be certain that I know what I’m talking about.

Back in those lean, unfruitful and obscure days I didn’t see any prospects ahead better than a raise into the next higher rung, which meant $150 a month. Today my pipelines which are fearfully lacking in the geometric refinements of those dimmer days, return to me an annual flow of $50,000.

Naturally, I couldn’t have just thrown away my board and drawing tools back there in the engineer’s office and turned cartoonist. There had to be the elements, the talent and ability to draw as well as the keen perception to select material for a possible market. Well, in the first place I was a born artist. At any rate, the ability to sketch and draw was latent and just had to be coaxed to come out.

The one who lies behind the secret of my success, if I may indulge in the frank admission of my self-esteem, is Charles Beall, a sign painter of San Francisco who was the one to ferret out my artistic potentialities, as they are sometimes called. I started out as a pupil and apprentice to Charlie Beall when I was 11 years old.

I got so excited about Mr. Beall’s attempts to bring out my art that I went in extravagantly for interior and exterior decorating, drawing sketches inside as well as outside the house, much to my parents’ displeasure, as well as my own. Although Mr. Beall settled down to a modest sign-painting business, he was considered quite an artist. He devoted three years of his spare time teaching me the rudiments of drawing.

As the last gesture under his wing I drew an old violin, in pen and ink. It attracted wide notice. At least I thought it did. I would not have traded that drawing for a Corot, and any art connoisseur will tell you that’s going some. My “Old Violin” was hung in the Board of Education rooms of San Francisco for a great many years. Finally, I guess it got tired of hanging there, or probably somebody got tired, and today it may be seen hanging proudly in my father’s home.

From that day on I could be found wistfully staring out of windows, fashioning sketches in my imagination and dreaming of triumphs yet to be. I remember when I first took up mechanical engineering how everything was automatically translated in my mind into sketches and not into mathematical formulae. Toward my senior year at the University of California I began to fall away from serious types of drawing and drifted into the field of caricatures.

The climax, the all-surpassing turning-point came in my last year at college. I had always penetrated to the funny side of scientific works. The course in analytic mechanics amused me most that way. The apparatus which they constructed in that course was baffling and almost supernatural. The professor himself seemed like some one superhuman. He was a tall, gangling, wizened crony with a red beard and an Adam’s apple that kept bobbing all the time he talked. He also wore gold-rimmed glasses. Most of the time he looked like he was a part of the machinery.

One particular morning the professor presented us with a mechanism by which he could determine the weight of the earth. It was a mangled and complicated system of test-tubes, retorts, levers, dynamos and other instruments which, I frankly admit, I never deciphered.

The professor rapped for attention, I distinctly remember, and as we all looked on breathlessly, for fear that this might be some infernal machine, he announced to us in solemn accents that the engine before us was a barodick. I could have laughed right out, because it didn’t mean a thing to me, and yet it was the funniest thing I have ever seen in motion.

I never got over the barodick. Ten years had elapsed and one day the vision of that goofy contraption returned to me. The idea burgeoned into a grand reality, but that’s skipping ten years too lightly. Let us go back a little and get a view of the trials and tribulations of the rising cartoonist.

That job in the City Engineer’s office blew up after three months. Shortly afterward I thought I had to go in for mining engineering seriously, but I got one glimpse down into a mine shaft and then and there my nerves told me I was an artist. I subsequently got a job on the San Francisco Chronicle at $8 a week. I drew pictures for the paper every day for three months, and not one of them was ever published.

Finally I landed in the sports department and I drew fight pictures which got into the paper. Then the San Francisco Bulletin lured me away from the Chronicle; there was so much favorable talk about the Rube’s fight sketches. Then I looked for other horizons. New York was elected.

I was 23 when I reached New York. I had resolved to strike out on my own. Five editors today can enjoy the privilege of saying that they threw me out of their offices when I first got to town. I was footloose for only twelve days when the very perceiving editor of The Mail took a chance on me, and vice versa.

The first series of my cartoons which clicked was the Foolish Questions number. I hit on that one quite accidentally. I had drawn a picture of a man who had just fallen out of a five-story window. As he lay in a heap on the sidewalk a lady chanced to come along and she inquired, “Are you hurt?”

In astonishment, he looked up and replied, “Oh, no. I’m just taking my beauty sleep.”

That started the Foolish Question rage. I doped out all I could. But I was a mental-midget compared to the thousands which poured in from my new army of followers. I figure I received 50,000 Foolish Questions â€”and I was foolish enough to answer them. Of course, those answers appeared in syndicated cartoons, which was all part of the mysterious process of turning ink into what it takes to keep the wolf away.

It was just about ten years ago that I decided to use my knowledge of mechanical engineering in my career as a cartoonist and artist. The combination has not been a barren pastime from a financial standpoint since it brought me some measure of fame and about $500,000, more or less. There’s a lot of magic hidden in a bottle of ink if you know how. Right now I’m busy on a very special invention. I’m trying to contrive an apparatus that will do all my drawing for me, but then it might take all my life savings to manufacture it!