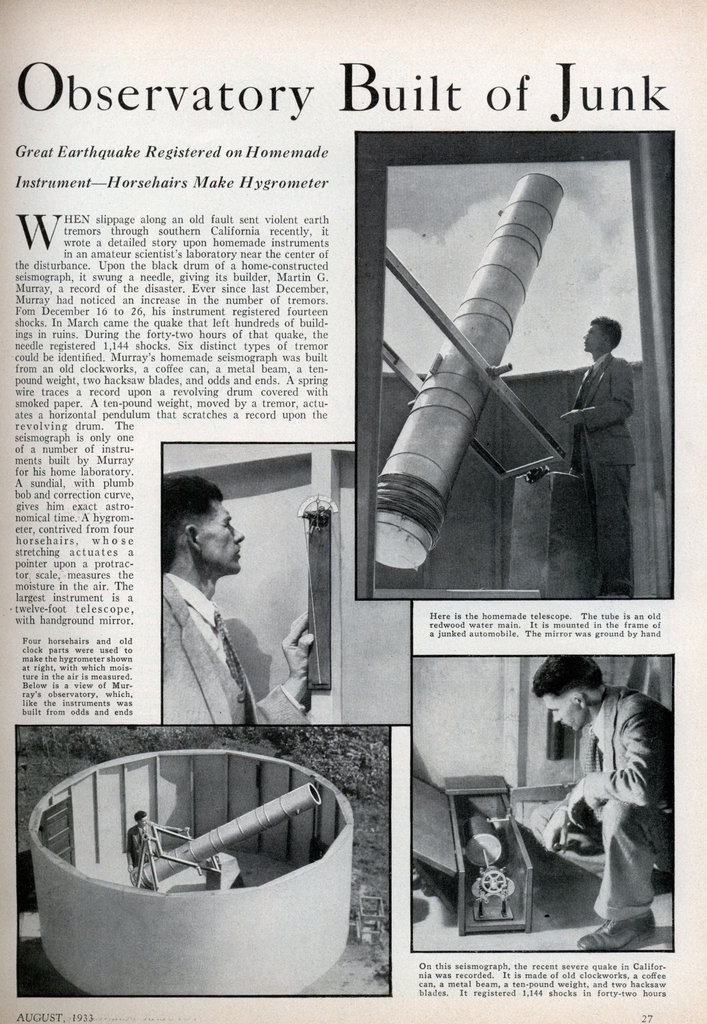 WHEN slippage along an old fault sent violent earth tremors through southern California recently, it wrote a detailed story upon homemade instruments in an amateur scientist’s laboratory near the center of the disturbance. Upon the black drum of a home-constructed seismograph, it swung a needle, giving its builder, Martin G. Murray, a record of the disaster. Ever since last December, Murray had noticed an increase in the number of tremors. Fom December 16 to 26, his instrument registered fourteen shocks. In March came the quake that left hundreds of buildings in ruins. During the forty-two hours of that quake, the needle registered 1,144 shocks. Six distinct types of tremor could be identified. Murray’s homemade seismograph was built from an old clockworks, a coffee can, a metal beam, a ten-pound weight, two hacksaw blades, and odds and ends. A spring wire traces a record upon a revolving drum covered with smoked paper. A ten-pound weight, moved by a tremor, actuates a horizontal pendulum that scratches a record upon the revolving drum. The seismograph is only one of a number of instruments built by Murray for his home laboratory. A sundial, with plumb bob and correction curve, gives him exact astronomical time. A hygrometer, contrived from four horsehairs, whose stretching actuates a pointer upon a protractor scale, measures the moisture in the air. The largest instrument is a twelve-foot telescope, with handground mirror.