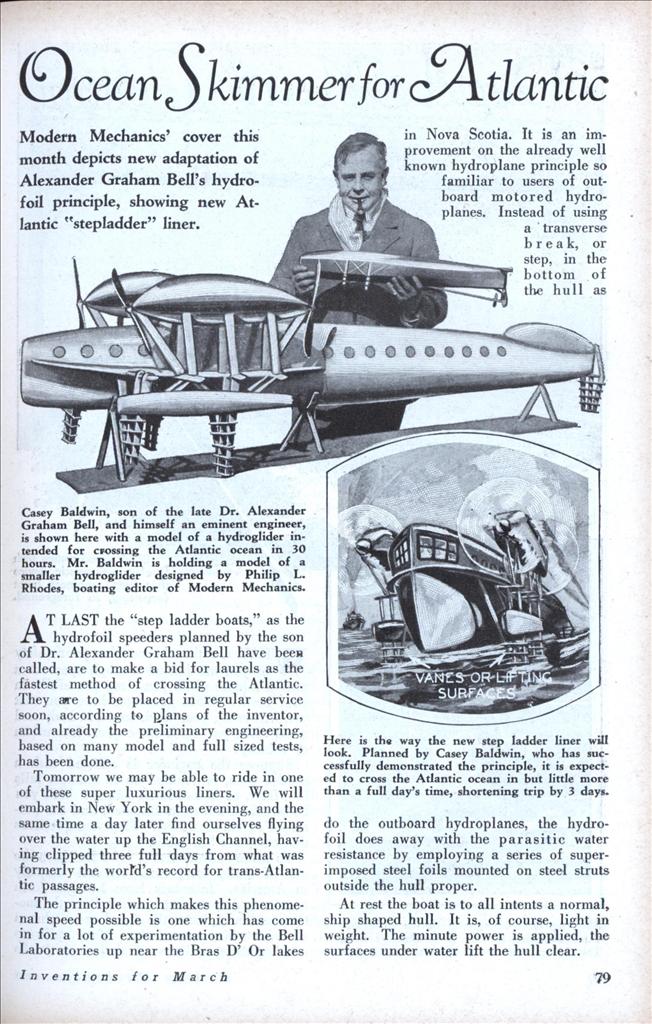 AT LAST the “step ladder boats,” as the hydrofoil speeders planned by the son of Dr. Alexander Graham Bell have been called, are to make a bid for laurels as the fastest method of crossing the Atlantic. They are to be placed in regular service soon, according to pans of the inventor, and already the preliminary engineering, based on many model and full sized tests, has been done.

Tomorrow we may be able to ride in one of these super luxurious liners. We will embark in New York in the evening, and the same time a day later find ourselves flying over the water up the English Channel, having clipped three full days from what was formerly the world’s record for trans-Atlantic passages.

The principle which makes this phenomenal speed possible is one which has come in for a lot of experimentation by the Bell Laboratories up near the Bras D’ Or lakes in Nova Scotia. It is an improvement on the already well known hydroplane principle so familiar to users of outboard motored hydroplanes. Instead of using a transverse break, or step, in the bottom of the hull as do the outboard hydroplanes, the hydrofoil does away with the parasitic water resistance by employing a series of superimposed steel foils mounted on steel struts outside the hull proper.

At rest the boat is to all intents a normal, ship shaped hull. It is, of course, light in weight. The minute power is applied, the surfaces under water lift the hull clear.