Look closely at the first paragraph in the image. Notice anything weird? Yup, that’s right, the second o in cooperation has an umlaut. I guess that’s so you don’t say the coop like, um, coop as opposed to co-op. I have seen other strange umlaututations in these magazines in the past. I wonder when people stopped doing this, or if it was even common. 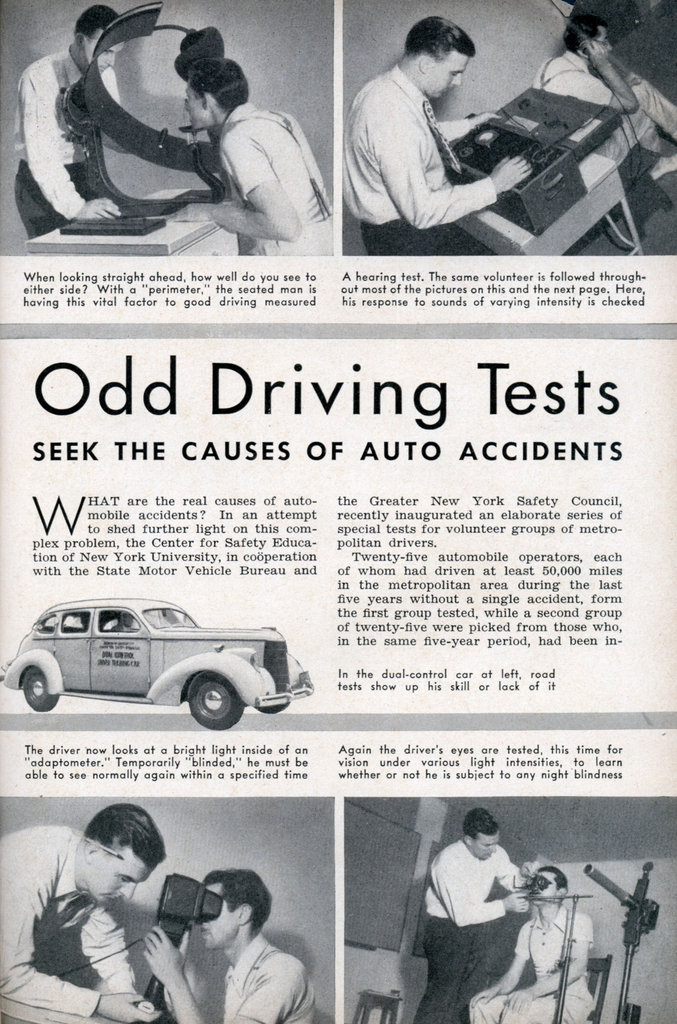 SEEK THE CAUSES OF AUTO ACCIDENTS

WHAT are the real causes of automobile accidents? In an attempt to shed further light on this complex problem, the Center for Safety Education of New York University, in coÃ¶peration with the State Motor Vehicle Bureau and the Greater New York Safety Council, recently inaugurated an elaborate series of special tests for volunteer groups of metropolitan drivers.

Twenty-five automobile operators, each of whom had driven at least 50,000 miles in the metropolitan area during the last five years without a single accident, form the first group tested, while a second group of twenty-five were picked from those who, in the same five-year period, had been involved in at least four accidents, one of which occurred within the last two years. By putting both groups through an extensive series of laboratory and actual driving tests, the researchers, under the direction of Dr. Leon Brody, of New York University, hope to be able to determine what physical and mental factors tend to make good drivers.

In specially equipped laboratory rooms, each driver is tested for blood pressure, muscular coordination, speed of reaction to sound and light, vision and muscular control of the eyes, and other physical factors. An impressive array of instruments, including a dynamometer, manoptoscope, adaptometer, and other scientific measuring instruments, is employed.

In a second group of tests, the subjects are sent out on the city streets in dual-control automobiles for actual driving tours. An accompanying observer rates the car operator’s driving ability with the aid of a scale chart designed expressly for the purpose. The third part of the complete test series involves written examinations given to check on matters of the subject’s personality and general intelligence, as well as on his driving attitude and knowledge of the principles and practices that contribute toward making a person a good driver.