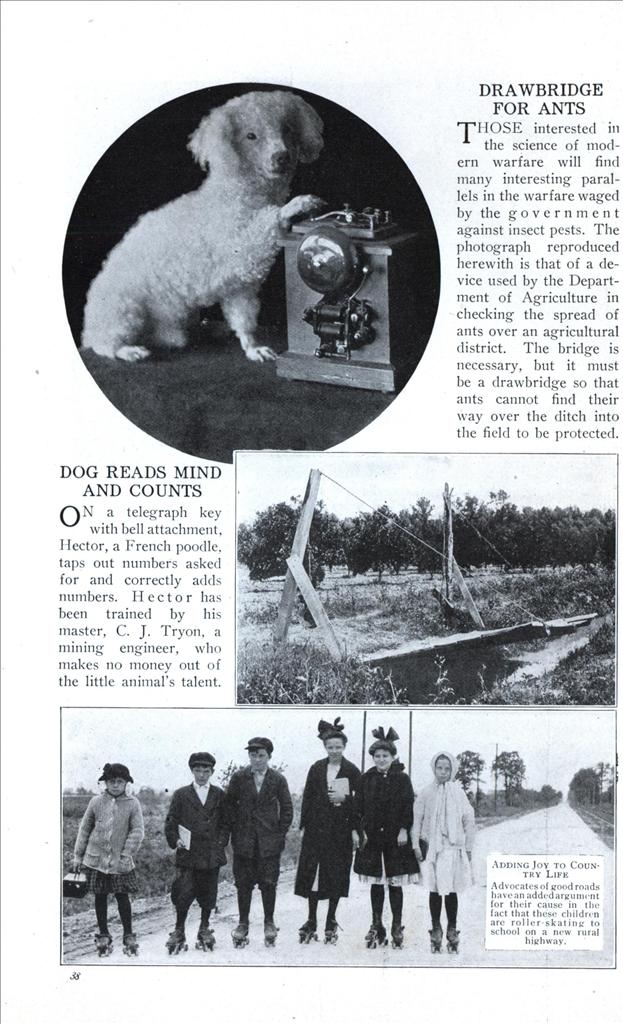 SCISSORS GRINDING UP TO DATE

THOSE who are inclined to regard the scissors grinder as a dull sort of fellow, who is content to push a cart with a tinkling bell through the streets, may well

contemplate the picture reproduced herewith, of another sort of scissors grinder. He uses his bicycle, riding it until he has work to do, and then supports the rear wheel in the usual way, and uses the machine as a source of power and as his work-bench, too. A simple attachment runs the emery wheel mounted on the handle bar, and the up-to-date grinder may sit at ease and pedal as he does his work.

“FLEET DAY ON THE LAKE”

JUST before the outing season is over at an inland lake, every person owning a boat of any kind binds the green firs to its sides so that it makes a float. In the picture a Cleopatra barge has been constructed. It is beautiful and was built with no expense and a minimum amount of labor. Similar barges representing incidents from mythology and history combine to make a striking and unique festival.

BULL THAT BREAKS ALL WEIGHT RECORDS

IT took two days to drive the 2520 pound Missouri bull shown in the illustration a short distance for shipment to the National Stockyards at East St. Louis, because his tremendous weight made him almost as hard to move over Missouri roads as if he had been a 42-centimeter German mortar. When he reached the National Stockyards, veteran shippers, feeders, and buyers of cattle crowded around him, unanimously agreeing that this bull was the biggest four-footed organism ever seen in the stock pens. He was sold at seven cents a pound, bringing his owner $176.40.

Road Built of Candy The paving is composed largely of refuse from a candy factory.

The “Slipping” Skirt The rather fantastic effect is the idea of Michel, and forms one of the Paris offerings.

ON a telegraph key with bell attachment, Hector, a French poodle, taps out numbers asked for and correctly adds numbers. Hector has been trained by his master, C. J. Tryon, a mining engineer, who makes no money out of the little animal’s talent.

DRAWBRIDGE FOR ANTS
THOSE interested in the science of modern warfare will find many interesting parallels in the warfare waged by the government against insect pests. The photograph reproduced herewith is that of a device used by the Department of Agriculture in checking the spread of ants over an agricultural district. The bridge is necessary, but it must be a drawbridge so that ants cannot find their way over the ditch into the field to be protected.

Adding Joy to Country Life Advocates of good roads have an added argument for their cause in the fact that these children are roller-skating to school on a new rural highway.

SAM W. MILLER of Holland, Michigan, has only his left arm ; but he managed to catch the fourteen-pound catfish shown in the picture. He was fishing from a low railroad bridge with a bamboo pole, when the big fellow swallowed the bait. Miller played his big catch until the fish was tired, then gripped the pole under his arm, and with a mighty heave swung the fish onto the bridge.

WHEN BUMBLE BEES ARE BAD

A WINTER overcoat is not usually worn at haying time; but one Ohio farmer did it because his hay fields were so full of bees’ nests.

AT HOME IN A BOILER

ONE resourceful wanderer has a home in the business portion of Seattle rent free, by living in a discarded steam boiler. The boiler is stripped of its tubing, and contains a bunk, a cook stove, a table, a bench, and handy shelves. The open end of the boiler has been boarded up, and contains a door and window. A bit of gardening in the “door yard” gives a homelike appearance to the odd domicil.