Gee, things sure have changed a whole lot since then. 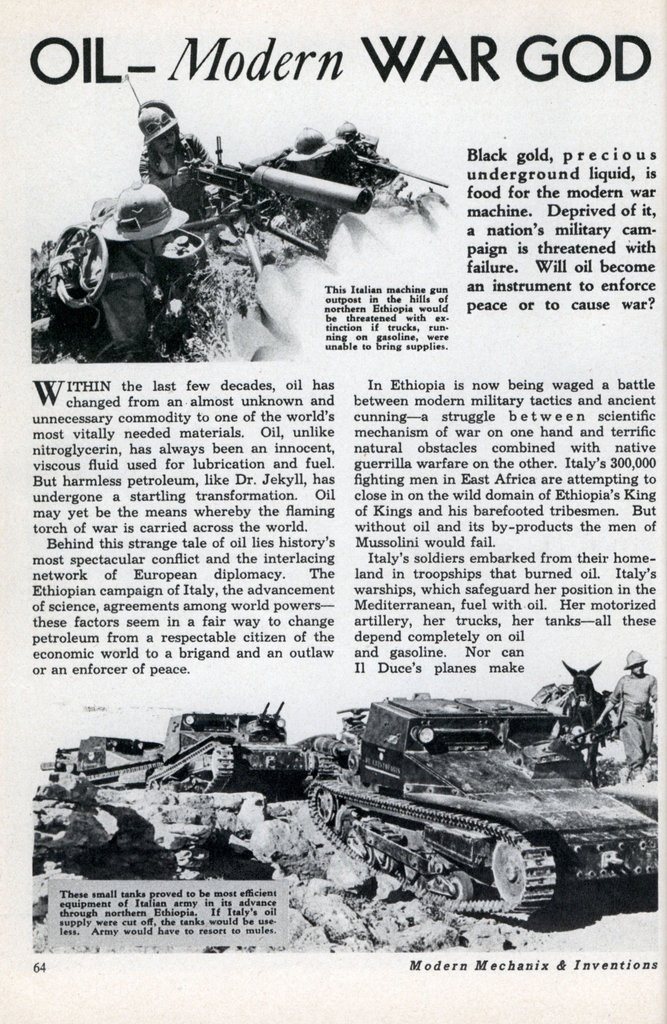 Black gold, precious underground liquid, is food for the modern war machine. Deprived of it, a nation’s military campaign is threatened with failure. Will oil become an instrument to enforce peace or to cause war?

WITHIN the last few decades, oil has changed from an almost unknown and unnecessary commodity to one of the world’s most vitally needed materials. Oil, unlike nitroglycerin, has always been an innocent, viscous fluid used for lubrication and fuel. But harmless petroleum, like Dr. Jekyll, has undergone a startling transformation. Oil may yet be the means whereby the flaming torch of war is carried across the world.

Behind this strange tale of oil lies history’s most spectacular conflict and the interlacing network of European diplomacy. The Ethiopian campaign of Italy, the advancement of science, agreements among world powersâ€” these factors seem in a fair way to change petroleum from a respectable citizen of the economic world to a brigand and an outlaw or an enforcer of peace.

In Ethiopia is now being waged a battle between modern military tactics and ancient cunningâ€”a struggle between scientific mechanism of war on one hand and terrific natural obstacles combined with native guerrilla warfare on the other. Italy’s 300,000 fighting men in East Africa are attempting to close in on the wild domain of Ethiopia’s King of Kings and his barefooted tribesmen. But without oil and its by-products the men of Mussolini would fail.

Italy’s soldiers embarked from their homeland in troopships that burned oil. Italy’s warships, which safeguard her position in the Mediterranean, fuel with oil. Her motorized artillery, her trucks, her tanksâ€”all these depend completely on oil and gasoline. Nor can Il Duce’s planes make bombing sorties over the Ethiopian wilderness without these essential petroleum products. Mussolini’s whole scheme of war is built around oilâ€”and Italy, the poorest of major powers in natural resources, has no oil of her own.

Italy’s strengthâ€”her superior machinery of warâ€”is also her weakness. It makes her utterly dependent on oilâ€”oil which she must buy from other nations. And her supply of oil is now imperilled by the threat of sanctions which may be imposed by other powers.

Here is where oil changes from a mere factor in an African embroilment to a worldwide menace. Italy’s powerful dictator is determined to push to a successful finish his campaign in Ethiopia. Face to face with the possibility that his precious imports of oil may be shut off, Mussolini has stated unequivocally that grave international complications might ensue. There are hints in Italian diplomatic circles that an embargo on oil would cause Italy to quit the League of Nations, call home her diplomats from the powers implicated, and even bomb the British fleet in the Mediterranean. This bombing, it is said, would be done by a squadron of aviators pledged to crash their death-laden planes in suicidal dives directly onto the decks of British ships. Such an attack would mean that the world would be thrown into an international war.

The United States was among the first to threaten to cut off the fuel pipe line to Italy. Under the provisions of the Neutrality Resolution our government has cut off munitions shipments to Italy; and Secretary of the Interior Ickes, as petroleum administrator, has called on oil producers to cease selling to belligerents.

Should the League of Nations impose an oil embargo, it is believed Italy’s guns in East Africa would be effectively spiked. Italy may be able to struggle along with her present supplies of coal and iron, but reinforcements in petroleum products must go on. Her reserve supply of the vital liquid, it is estimated, will last about three months. Her 5,000 motor vehicles and 250 planes consume about 50,000 gallons of gasoline daily; and this does not include domestic vehicles and warships.

An embargo on oil would encircle Italy with a force more powerful than arms. It would make a colossal failure, a laughing-stock, of the entire Ethiopian campaign.

Would Mussolini give up his purpose, withdraw his troops from the field, and retire quietly to Italy? More probably an oil embargo might mean that the Italian forces would be recalled while the oil reserve still lasts, to be hurled furiously at the nations enforcing the embargo. This would be war, deadly warâ€”the world’s first battle over oil.

At the height of the Ethiopian campaign gasoline sold in Italy at $1.20 a gallonâ€”a potent reason why Italy’s streets are almost barren of pleasure vehicles. Patriots were urged by the Fascist press to use railroads and buses, so that petroleum products may be saved for use in Ethiopia.

Will lack of oil and gasoline stop her from attaining her ends? Italy answers no. And it may yet be that oilâ€”a lubricant and a source of powerâ€”will serve as the percussion-cap exploding Europe and the world with death and destruction or it may bring peace to the war-tired earth.