This would be a pretty amazing show. Though with today’s gas prices, it would be a very expensive one. 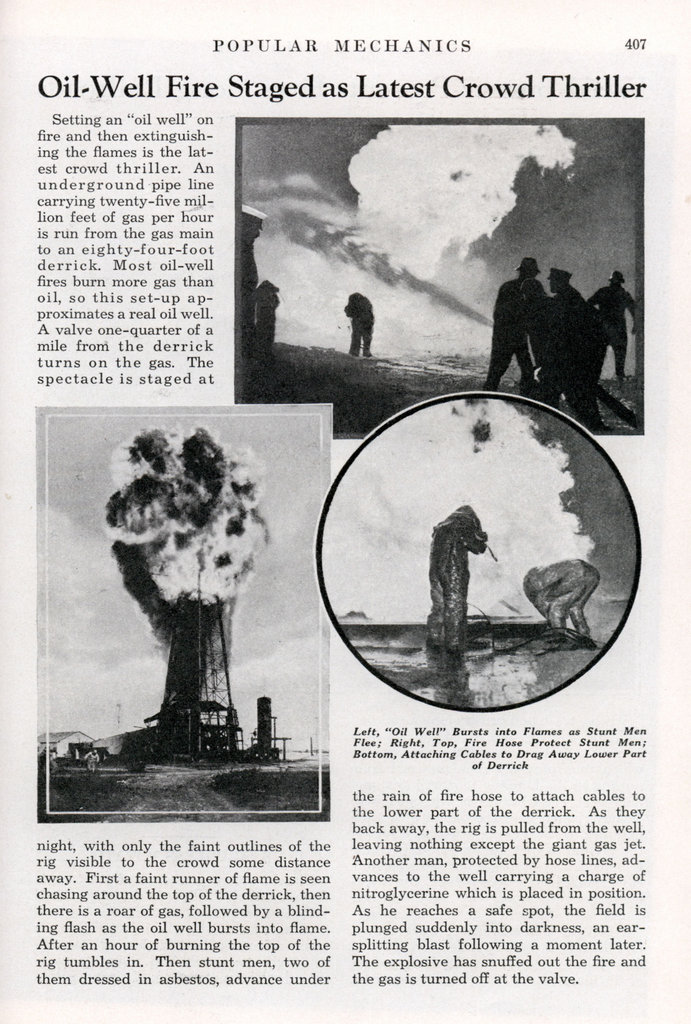 Setting an “oil well” on fire and then extinguishing the flames is the latest crowd thriller. An underground pipe line carrying twenty-five million feet of gas per hour is run from the gas main to an eighty-four-foot derrick. Most oil-well fires burn more gas than oil, so this set-up approximates a real oil well. A valve one-quarter of a mile from the derrick turns on the gas. The spectacle is staged at night, with only the faint outlines of the rig visible to the crowd some distance away. First a faint runner of flame is seen chasing around the top of the derrick, then there is a roar of gas, followed by a blinding flash as the oil well bursts into flame. After an hour of burning the top of the rig tumbles in. Then stunt men, two of them dressed in asbestos, advance under the rain of fire hose to attach cables to the lower part of the derrick. As they back away, the rig is pulled from the well, leaving nothing except the giant gas jet. Another man, protected by hose lines, advances to the well carrying a charge of nitroglycerine which is placed in position. As he reaches a safe spot, the field is plunged suddenly into darkness, an ear-splitting blast following a moment later. The explosive has snuffed out the fire and the gas is turned off at the valve.