“Oh Skinnay! (The Days of Real Sport)” was a 1913 graphic novel about a child’s antics. Current uses of the word “Skinnay” are distinctly less savory. 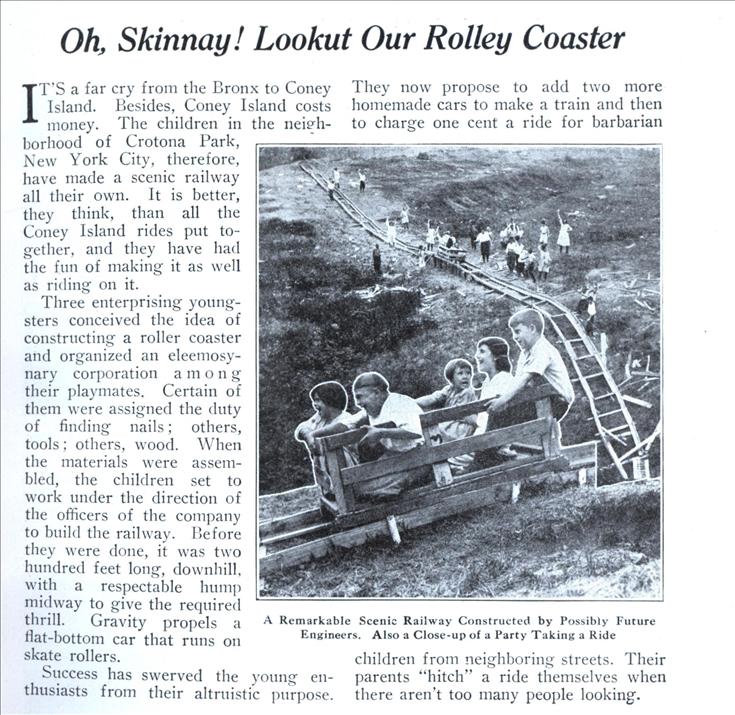 IT’S a far cry from the Bronx to Coney Island. Besides, Coney Island costs money. The children in the neighborhood of Crotona Park, New York City, therefore, have made a scenic railway all their own. It is better, they think, than all the Coney Island rides put together, and they have had the fun of making it as well as riding on it.

Three enterprising youngsters conceived the idea of constructing a roller coaster and organized an eleemosynary corporation among their playmates. Certain of them were assigned the duty of finding nails; others, tools ; others, wood. When the materials were assembled, the children set to work under the direction of the officers of the company to build the railway. Before they were done, it was two hundred feet long, downhill, with a respectable hump midway to give the required thrill. Gravity propels a fiat-bottom car that runs on skate rollers.

Success has swerved the young enthusiasts from their altruistic purpose.

They now propose to add two more homemade cars to make a train and then to charge one cent a ride for barbarian children from neighboring streets. Their parents “hitch” a ride themselves when there aren’t too many people looking.