This is GENIUS. I’m going to buy an old Gravitron and charge an arm and a leg for centrifugalization treatment. 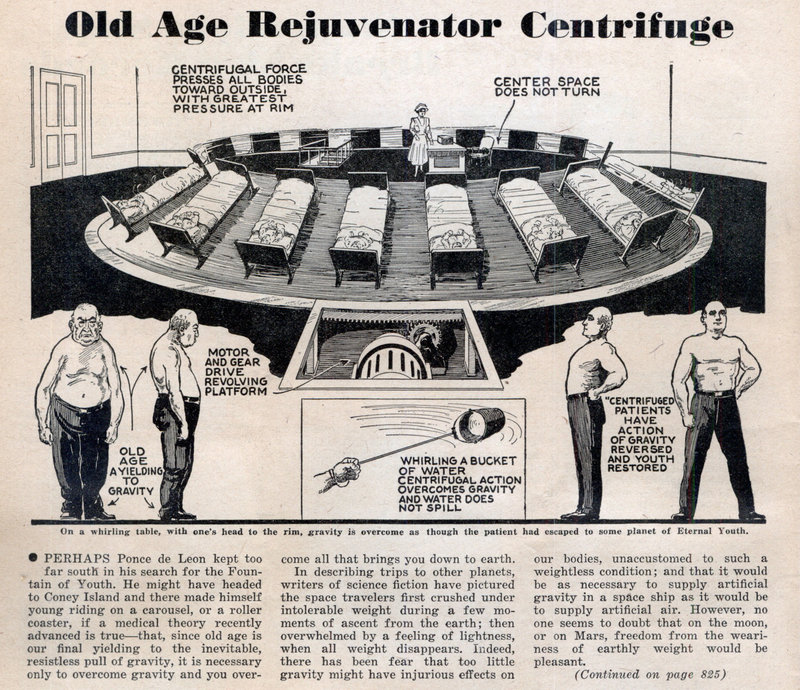 PERHAPS Ponce de Leon kept too far south in his search for the Fountain of Youth. He might have headed to Coney Island and there made himself young riding on a carousel, or a roller coaster, if a medical theory recently advanced is trueâ€”that, since old age is our final yielding to the inevitable, resistless pull of gravity, it is necessary only to overcome gravity and you overcome all that brings you down to earth. In describing trips to other planets, writers of science fiction have pictured the space travelers first crushed under intolerable weight during a few moments of ascent from the earth; then overwhelmed by a feeling of lightness, when all weight disappears. Indeed, there has been fear that too little gravity might have injurious effects on our bodies, unaccustomed to such a weightless condition; and that it would be as necessary to supply artificial gravity in a space ship as it would be to supply artificial air. However, no one seems to doubt that on the moon, or on Mars, freedom from the weariness of earthly weight would be pleasant.

No fears of weightlessness are expressed in a recent proposal to the medical profession of a treatment to remedy the ravages of advancing years, by the whirling-disc system which our artist has illustrated:

“It would seem,” says the Medical Times, “as though we have not taken sufficientâ€”if anyâ€”account in our study of mechanical factors having influence upon senile (old-age) phenomena, of the force of gravity. The weight of the blood thrown by the heart into the first reaches of the vascular (blood-vessel) tubulature must be taken into account, along with friction and the ramification of the vascular tree, in the estimation of wear and tear. So, too, there is the pull-back or weight of the blood, in the vessels of the extremities, which course away from the center of the earth which draws all things to it.

“Do not the aging carry around an ‘increasing’ weight? Is not the resistance to gravity of their moving bodies discernible in every step taken? Think of the internal pullings on our weakening machinery as we age. The supporting beams grow weaker; the weight of what they have to support gets ‘greater’; the arches of the feet do not ‘fall,’ they are pulled to the ground; the jaw sags; the mouth droops; the old man bows and bends; he is pulled toward the earth; his very eyelids, like window shades toward evening, are drawn down, and at long last he is literally pulled into his grave.

“Old age, then, is in part a gradual succumbing to the force of gravity. Should we not take this great fact into mathematical account in our study of the mechanics of the circulation, of body strains, and of cardiovascular disease?

“What shall the prophylaxis (prevention) and therapy (treatment) be? How can the effects of this force be mitigated? Lying down relieves the daytime direction of fatiguing pull in the case of the well or slightly ill; but something more than this is needed by the badly-damaged. We suggest periods of centrifugalization. An individual in special need of treatment might rest at night upon a large revolving disc with his head toward the outer rim; the disc should be so beveled as to carry the head at a lower level than the feet; optimum (best) speed to be determined by laboratory experimentation. Such a disc might be large enough to carry ten or twenty patients. This mechanism would facilitate the functions which during the day are inhibited by gravity. Incidentally, certain cardiac (heart) and vascular disabilities might be especially helped. The decompensated heart, with edematous (swollen) and varicose extremities, might respond well.”

It is the principle of the centrifuge, as illustrated, that it forces objects outward with a pressure which may be made (in certain small, high-speed scientific instruments) thousands of times that of gravity. However, no such pressure could be endured by human beings; but a gentle speed, a little faster perhaps than that of the merry-go-round familiar at amusement parks, would quite reverse the pressure of gravity on the body. It might be added that, to avoid undue pressure on the blood vessels of the brain, it might be well to raise this organ slightly above the level of the body (thus forming a component with gravity to neutralize both) rather than lower it, as suggested by the physician.