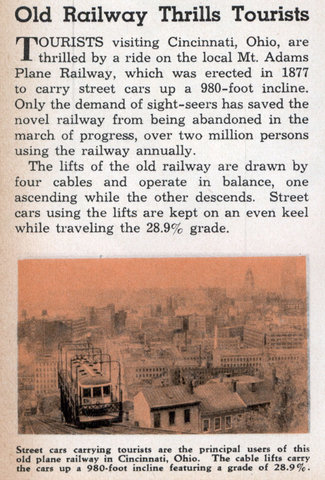 TOURISTS visiting Cincinnati, Ohio, are thrilled by a ride on the local Mt. Adams Plane Railway, which was erected in 1877 to carry street cars up a 980-foot incline. Only the demand of sight-seers has saved the novel railway from being abandoned in the march of progress, over two million persons using the railway annually.

The lifts of the old railway are drawn by four cables and operate in balance, one ascending while the other descends. Street cars using the lifts are kept on an even keel while traveling the 28.9% grade.