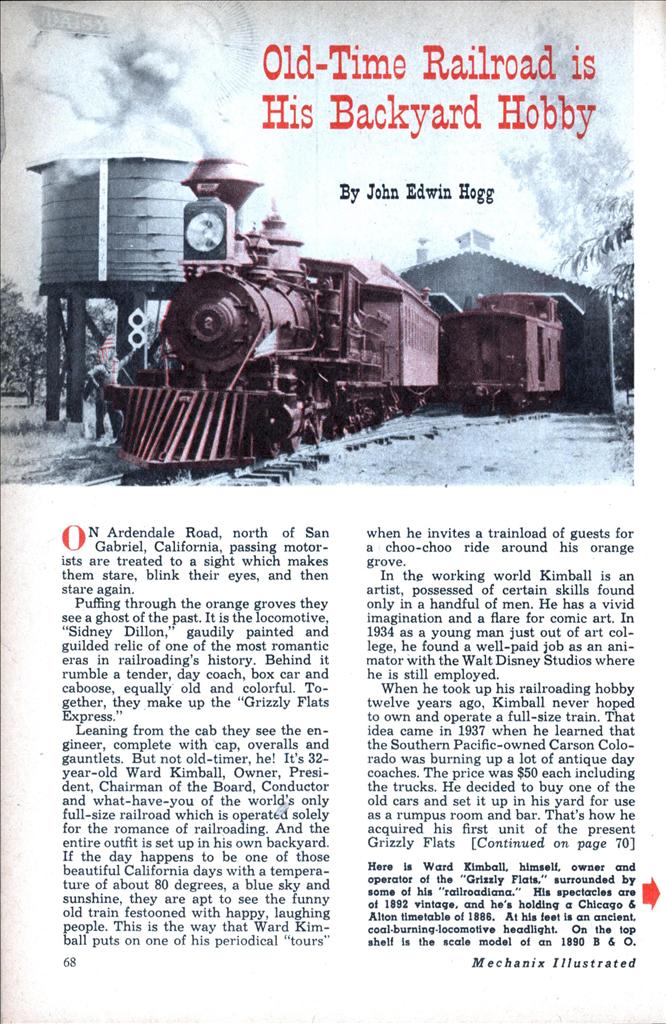 Old-Time Railroad is His Backyard Hobby

ON Ardendale Road, north of San Gabriel, California, passing motorists are treated to a sight which makes them stare, blink their eyes, and then stare again.

Puffing through the orange groves they see a ghost of the past. It is the locomotive, “Sidney Dillon,” gaudily painted and guilded relic of one of the most romantic eras in railroading’s history. Behind it rumble a tender, day coach, box car and caboose, equally old and colorful. Together, they make up the “Grizzly Flats Express.”

Leaning from the cab they see the engineer, complete with cap, overalls and gauntlets. But not old-timer, he! It’s 32-year-old Ward Kimball, Owner, President, Chairman of the Board, Conductor and what-have-you of the world’s only full-size railroad which is operated solely for the romance of railroading. And the entire outfit is set up in his own backyard. If the day happens to be one of those beautiful California days with a temperature of about 80 degrees, a blue sky and sunshine, they are apt to see the funny old train festooned with happy, laughing people. This is the way that Ward Kimball puts on one of his periodical “tours” when he invites a trainload of guests for a choo-choo ride around his orange grove.

In the working world Kimball is an artist, possessed of certain skills found only in a handful of men. He has a vivid imagination and a flare for comic art. In 1934 as a young man just out of art college, he found a well-paid job as an animator with the Walt Disney Studios where he is still employed.

When he took up his railroading hobby twelve years ago, Kimball never hoped to own and operate a full-size train. That idea came in 1937 when he learned that the Southern Pacific-owned Carson Colorado was burning up a lot of antique day coaches. The price was $50 each including the trucks. He decided to buy one of the old cars and set it up in his yard for use as a rumpus room and bar. That’s how he acquired his first unit of the present Grizzly Flats train, S. P. Coach No. 5, with enough track to provide it with “parking space.”

Out of the old coach he got the idea of assembling a train, a thought that was realized when he learned that the Nevada Central Railroad was going out of business and had several old locomotives for sale. Thus, in the autumn of 1938 he acquired old “Sidney Dillon” by writing a check for $400. It cost an additional $450 to bring his prize to Los Angeles from Battle Mountain, Nevada, in a Southern Pacific gondola car. A huge motor truck completed the delivery to the Kimball estate. Later other equipment, including 650 feet of track, the cars, engine house, water tank, an old hand-car, etc., were added to complete the Grizzly Flats Railroad as it appears today.

At first consideration it may appear that Kimball’s hobby is just another way for a wealthy man to squander a lot of money. But there’s far more back of what he is doing than appears upon superficial examination. He is far more than a wild-eyed railroad enthusiast; he has built and is still building an invaluable museum of railroading—a collection of “railroadiana” as he calls it. It has already saved much of the educational history of railroading from being lost forever.

Because it has been impossible for him to find “parking space” for more than one full-size train, Kimball has added more than 110 models to this collection. Some of these are toys—valuable, nevertheless, because their manufacturers have made them as replicas of the designs of their era.

One of Kimball’s most prized possessions is a working model of a locomotive extensively used during the 1890’s by the Baltimore and Ohio Railroad. It was built by an old station agent who possessed an eye for accuracy and was a genius for intricate workmanship. On a scale of % of an inch to 1 foot, this little engine has every detail and mechanical part appearing on the original drawings from which the full-scale locomotives were built. Today, more than half a century since the model was assembled, water in the boiler and a head of steam from alcohol fuel in the firebox are all that are needed to operate this Lilliputian “Mogul” under its own power.

All over the Kimball Ranch—in the spacious, modern home, in shelves along walls, in the artist’s studio, in the yard, in outbuildings and other storage spaces there’s an almost bewildering collection of antique railroad equipment. Much of it few modern train travelers would even be able to identify. There are old locomotive headlights that burned kerosene or Pintsch gas, old bells, whistles, coach and station lamps, pot-bellied cast-iron stoves, and white-washed coal burners that once heated trains and depot waiting rooms. There’s a museum of telegraph equipment, conductors’ lanterns, wash basins from ancient Pullman cars, public drinking cups and roller towels.

The Kimball Library of Railroading contains more than 1,000 books, volumes covering every imaginable subject from 1835 until the present. It also has a vast collection of old railroad time tables, advertising lithographs, travel guides, railroad songs, tickets, parses, and other printed matter—much of it from railroads that have rusted into history. A tremendously fascinating section of the library is an assortment of railroad patents, patent drawings, lithography and working patent models.

Whether or not you are a model-railroader, if you should happen to be driving through picturesque San Gabriel Valley in the future, be sure to stop by and observe the Grizzly Flats. You’ll see for yourself a railroader who is literally “riding his hobby.”