Science And Mechanics
Issue: Feb, 1952
Posted in: Nautical
4 Comments on On the FIRE – A PREVIEW OF TOMORROW IN SCIENCE AND INDUSTRY (Feb, 1952)

On the FIRE – A PREVIEW OF TOMORROW IN SCIENCE AND INDUSTRY (Feb, 1952) 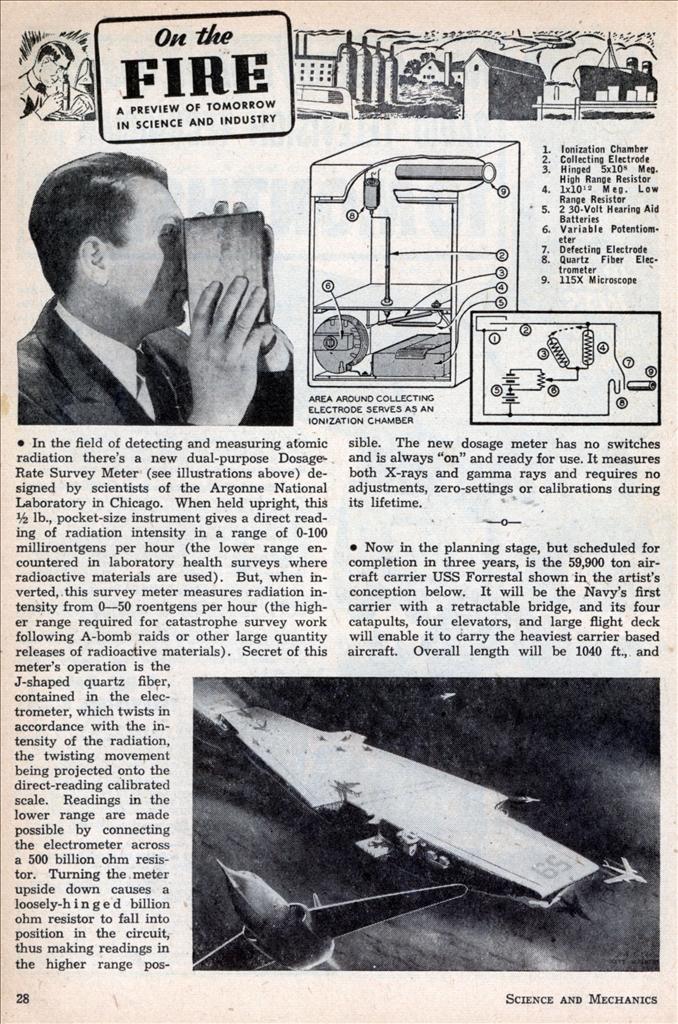 On the FIRE – A PREVIEW OF TOMORROW IN SCIENCE AND INDUSTRY

• In the field of detecting and measuring atomic radiation there’s a new dual-purpose Dosage-Rate Survey Meter (see illustrations above) designed by scientists of the Argonne National Laboratory in Chicago. When held upright, this 1/2 lb., pocket-size instrument gives a direct reading of radiation intensity in a range of 0-100 milliroentgens per hour (the lower range encountered in laboratory health surveys where radioactive materials are used). But, when inverted, this survey meter measures radiation intensity from 0—50 roentgens per hour (the higher range required for catastrophe survey work following A-bomb raids or other large quantity releases of radioactive materials). Secret of this meter’s operation is the J-shaped quartz fiber, contained in the electrometer, which twists in accordance with the intensity of the radiation, the twisting movement being projected onto the direct-reading calibrated scale. Readings in the lower range are made possible by connecting the electrometer across a 500 billion ohm resistor. Turning the meter upside down causes a loosely-hinged billion ohm resistor to fall into position in the circuit, thus making readings in the higher range pos- sible. The new dosage meter has no switches and is always “on” and ready for use. It measures both X-rays and gamma rays and requires no adjustments, zero-settings or calibrations during its lifetime.

• Now in the planning stage, but scheduled for completion in three years, is the 59,900 ton aircraft carrier USS Forrestal shown in the artist’s conception below. It will be the Navy’s first carrier with a retractable bridge, and its four catapults, four elevators, and large flight deck will enable it to carry the heaviest carrier based aircraft. Overall length will be 1040 ft.,, and the carrier will have an estimated 128 ft. beam at the waterline and a 252 ft. beam at the widest point of the flight deck. This new super-carrier, which will accommodate 3,500 men, will be able to cruise at 30 knots (that’s about 34-1/2 mph to us landlubbers), and remain at sea for three months without replenishing. The cost? In rough figures, an estimated $218,000,000.

• Whether this will soothe the jangled nerves of the nation’s automobile drivers is a moot question, but Floyd J. Dofsen of San Francisco has just received patent #2,574,090 on a talking road. His idea is to set special lengthwise panels, which have an undulating upper surface conforming to the shape of the predetermined sound wave, in the surface of the pavement. The edges of these panels or “sound tracks” will lie just above the road surface, so that the vehicle rolling over them in quick succession produces audible words such as “danger” or “crossing.” The car’s body will act as a sound box to make the warning words understandable to the driver.

• You can add another name to that list of lightweight aggregates on page 69. After we put our story to bed, word came in that Poole Maynard of Atlanta, Ga. had received patent #2,569,323 on a method of turning phosphatic volcanic ash (from the large pebble phosphate deposits in Florida) into a lightweight aggregate for concrete. Maynard’s method is to dry the ash and make it into pellets which are fired into a rotary kiln for about 10 minutes at temperatures above 1600° F., then to crush the bloated pellets. The resulting product weighs about 25-30 lbs. per cu. ft.

• Phillip Flagge and Melvin Gerds of Milwaukee, Wise., have it in for burglars. In fact, they have just received patent #2,570,438 on an alarm that not only gives audible and visual alarm signals when the burglar trips over a triggering wire stretched around a building, but also sets off a tear gas bomb.

• You’ll find the first letter commenting on our new car testing series in this issue’s Reader’s Round Table. As we go to press, other letters are coming in and you’ll see many interesting comments about this testing program in our next issue. Meanwhile, let’s have more suggestions about how we can improve these tests. We did a better job on the reports in this issue (see page 70) but there’s still plenty of room for improvement. So write us just what you want to see covered in these tests, and we’ll revise our tests to include as many of your ideas as we can.