Scientific American
Issue: May, 1980
Posted in: Advertisements, Computers
8 Comments on ONE OF THE GREAT MISCALCULATIONS IN IBM HISTORY (May, 1980)

ONE OF THE GREAT MISCALCULATIONS IN IBM HISTORY (May, 1980) 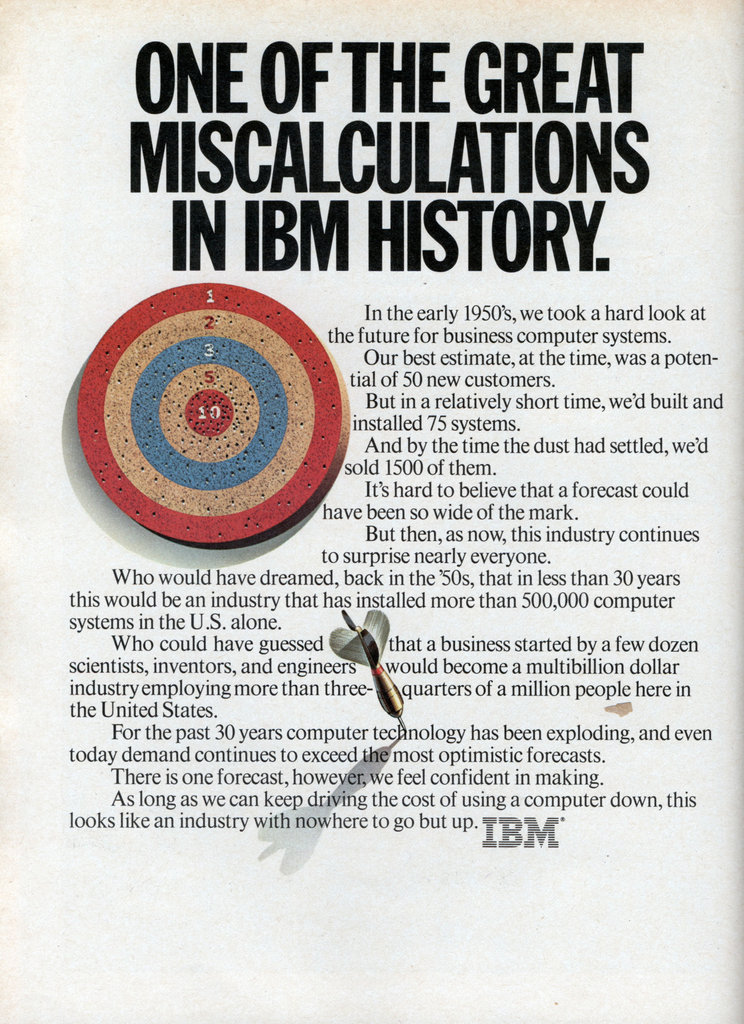 ONE OF THE GREAT MISCALCULATIONS IN IBM HISTORY

In the early 1950’s, we took a hard look at the future for business computer systems.

Our best estimate, at the time, was a potential of 50 new customers.

But in a relatively short time, we’d built and installed 75 systems. And by the time the dust had settled, we’d sold 1500 of them.

It’s hard to believe that a forecast could have been so wide of the mark.

But then, as now, this industry continues to surprise nearly everyone.

Who would have dreamed, back in the ’50s, that in less than 30 years this would be an industry that has installed more than 500,000 computer systems in the U .S. alone.

Who could have guessed that a business started by a few dozen scientists, inventors, and engineer would become a multibillion dollar industry employing more than three-quarters of a million people here in the United States.

For the past 30 years computer technology has been exploding, and even today demand continues to exceed the most optimistic forecasts.

There is one forecast, however, we feel confident in making.

As long as we can keep driving the cost of using a computer down, this looks like an industry with nowhere to go but up.