Popular Science
Issue: Jul, 1980
Posted in: Television
15 Comments on Optical vs mechanical: the coming battle of the video-disc players (Jul, 1980)

Optical vs mechanical: the coming battle of the video-disc players (Jul, 1980) 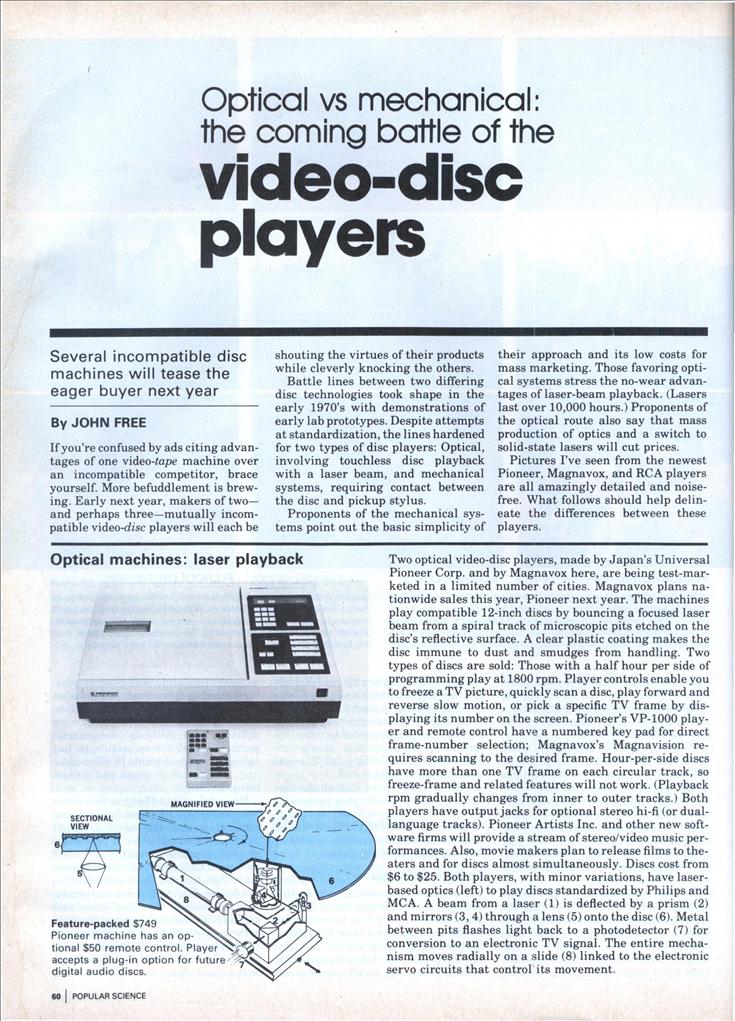 Optical vs mechanical: the coming battle of the video-disc players

If you’re confused by ads citing advantages of one videotape machine over an incompatible competitor, brace yourself. More befuddlement is brewing. Early next year, makers of two— and perhaps three—mutually incompatible video-disc players will each be shouting the virtues of their products while cleverly knocking the others.

Battle lines between two differing disc technologies took shape in the early 1970’s with demonstrations of early lab prototypes. Despite attempts at standardization, the lines hardened for two types of disc players: Optical, involving touchless disc playback with a laser beam, and mechanical systems, requiring contact between the disc and pickup stylus.

Proponents of the mechanical systems point out the basic simplicity of their approach and its low costs for mass marketing. Those favoring optical systems stress the no-wear advantages of laser-beam playback. (Lasers last over 10,000 hours.) Proponents of the optical route also say that mass production of optics and a switch to solid-state lasers will cut prices.

Pictures I’ve seen from the newest Pioneer, Magnavox, and RCA players are all amazingly detailed and noise-free. What follows should help delineate the differences between these players.

Optical machines: laser playback Two optical video-disc players, made by Japan’s Universal Pioneer Corp. and by Magnavox here, are being test-marketed in a limited number of cities. Magnavox plans nationwide sales this year, Pioneer next year. The machines play compatible 12-inch discs by bouncing a focused laser beam from a spiral track of microscopic pits etched on the disc’s reflective surface. A clear plastic coating makes the disc immune to dust and smudges from handling. Two types of discs are sold: Those with a half hour per side of programming play at 1800 rpm. Player controls enable you to freeze a TV picture, quickly scan a disc, play forward and reverse slow motion, or pick a specific TV frame by displaying its number on the screen. Pioneer’s VP-1000 player and remote control have a numbered key pad for direct frame-number selection; Magnavox’s Magnavision requires scanning to the desired frame. Hour-per-side discs have more than one TV frame on each circular track, so freeze-frame and related features will not work. (Playback rpm gradually changes from inner to outer tracks.) Both players have output jacks for optional stereo hi-fi (or dual-language tracks). Pioneer Artists Inc. and other new software firms will provide a stream of stereo/video music performances. Also, movie makers plan to release films to theaters and for discs almost simultaneously. Discs cost from $6 to $25. Both players, with minor variations, have laser-based optics (left) to play discs standardized by Philips and MCA. A beam from a laser (1) is deflected by a prism (2) and mirrors (3, 4) through a lens (5) onto the disc (6). Metal between pits flashes light back to a photodetector (7) for conversion to an electronic TV signal. The entire mechanism moves radially on a slide (8) linked to the electronic servo circuits that control its movement.

RCA: grooved capacitance disc RCA’s SelectaVision video-disc player has been completely overhauled since it was introduced and field-tested several years ago [PS, Feb. ’77]. The basic playback principle is unchanged: A stylus electrode, replaced every two or three years, senses the TV signal as electrical capacitance variations in disc grooves spinning at 450 rpm. Playing time was boosted to one hour per 12-inch disc side by doubling disc grooves to just under 10,000 per inch. Home tests showed that dust and other groove contaminants from handling messed up pictures. So RCA’s improved SelectaVision has sealed disc “caddies.” Slip the caddy into a player slot (photo) and the disc is loaded automatically. This contact-free, sealed-player approach sharply reduces groove contamination. Spiral grooves, with four TV frames per revolution, do not permit freeze-frame and similar features now. These operating features may go into future step-up models using electronic memories to store images. Two fast-search buttons, though, let you jump the stylus forward or back to quickly locate a scene visually. Also, two other search buttons move the tone arm and display its position as time on digital readouts. RCA does not plan to include stereo hi-fi capability on its initial model, slated for nationwide marketing early next year. The player’s simple construction, plus many microcircuits, should keep RCA’s price under $500. Discs will be $15 to $20, depending on content. RCA’s low-cost approach has gained powerful allies: Zenith and undoubtedly other TV firms will market or make SelectaVisions. CBS Inc. will help expand disc titles from 150 to 300 in the first year. Programs from several film companies range from classics, musicals, current films, and how-to, to TV series such as Star Trek (10 episodes) and Victory at Sea (a 90-minute version), and Heidi and Hans Brinker for children.

JVC: grooveless capacitance disc Victor Company of Japan (or JVC here) rolled out a disc system in 1978 that combines the low-cost aspects of SelectaVision (above) with the operating options—freeze-frame, slow-motion, etc.—of optical machines. Not only that, JVC included options for a super-hi-fi audio disc. It calls the whole package its VHD/AHD system (video and audio high density). Matsushita, Victor’s parent firm in Japan, could offer VHD/AHD through its Panasonic and Quasar subsidiaries. An announcement about marketing is expected this summer. VHD/AHD hour-per-side discs are just over 10 inches in diameter and rotate at 900 rpm. Signals are stored as capacitance variations, produced by minute pits in the conductive plastic. The stylus rests over several spiral tracks, distributing pressure and minimizing wear. (Stylus life is 2000 hours, roughly 10 times RCA’s.) But the metal stylus electrode “reads” just one information track and the tracking signals on either side of it. These tracking signals keep the stylus on the right path by feeding current to a coil/magnet combination on the arm, which can move sideways. The cantilever arm can also be stretched or shortened instantly to correct for speed variations (time-base errors). Signals sent to coils can be used to make the stylus replay one frame continuously, move ahead or back at slow speed, etc. JVC has also demonstrated an optional random-access unit with a wireless remote control for the main VHD/AHD player. It has memories and numbered key pads for preprogrammed display of selected TV frames. Another plug-in option unscrambles digitally coded audio discs that have a dynamic range over 90 dB and other super-fidelity specifications. At this writing, JVC has not revealed video software sources needed to sell its system successfully. Europe’s Thorn-EMI Ltd., though, has agreed to produce both players and software.