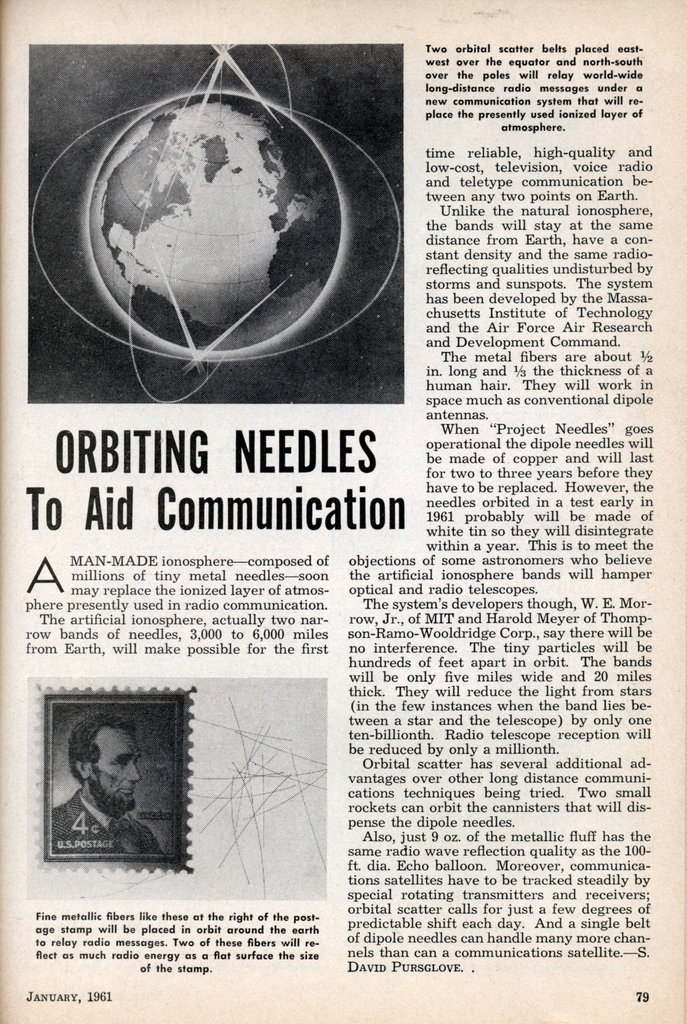 A MAN-MADE ionosphereâ€”composed of millions of tiny metal needlesâ€”soon may replace the ionized layer of atmosphere presently used in radio communication. The artificial ionosphere, actually two narrow bands of needles, 3,000 to 6,000 miles from Earth, will make possible for the first time reliable, high-quality and low-cost, television, voice radio and teletype communication between any two points on Earth.

Unlike the natural ionosphere, the bands will stay at the same distance from Earth, have a constant density and the same radio-reflecting qualities undisturbed by storms and sunspots. The system has been developed by the Massachusetts Institute of Technology and the Air Force Air Research and Development Command.

The metal fibers are about 1/2 in. long and 1/3 the thickness of a human hair. They will work in space much as conventional dipole
antennas.

When “Project Needles” goes operational the dipole needles will be made of copper and will last for two to three years before they have to be replaced. However, the needles orbited in a test early in 1961 probably will be made of white tin so they will disintegrate within a year. This is to meet the objections of some astronomers who believe the artificial ionosphere bands will hamper optical and radio telescopes.
The system’s developers though, W. E. Morrow, Jr., of MIT and Harold Meyer of Thompson-Ramo-Wooldridge Corp., say there will be no interference. The tiny particles will be hundreds of feet apart in orbit. The bands will be only five miles wide and 20 miles thick. They will reduce the light from stars (in the few instances when the band lies between a star and the telescope) by only one ten-billionth. Radio telescope reception will be reduced by only a millionth.

Orbital scatter has several additional advantages over other long distance communications techniques being tried. Two small rockets can orbit the cannisters that will dispense the dipole needles.

Also, just 9 oz. of the metallic fluff has the same radio wave reflection quality as the 100-ft. dia. Echo balloon. Moreover, communications satellites have to be tracked steadily by special rotating transmitters and receivers; orbital scatter calls for just a few degrees of predictable shift each day. And a single belt of dipole needles can handle many more channels than can a communications satellite.â€”S. David Pursglove.