Origin of the Guinness Book of Records (Aug, 1957)

Well, actually the Guinness Book of Superlatives, I’m not sure when it was changed. 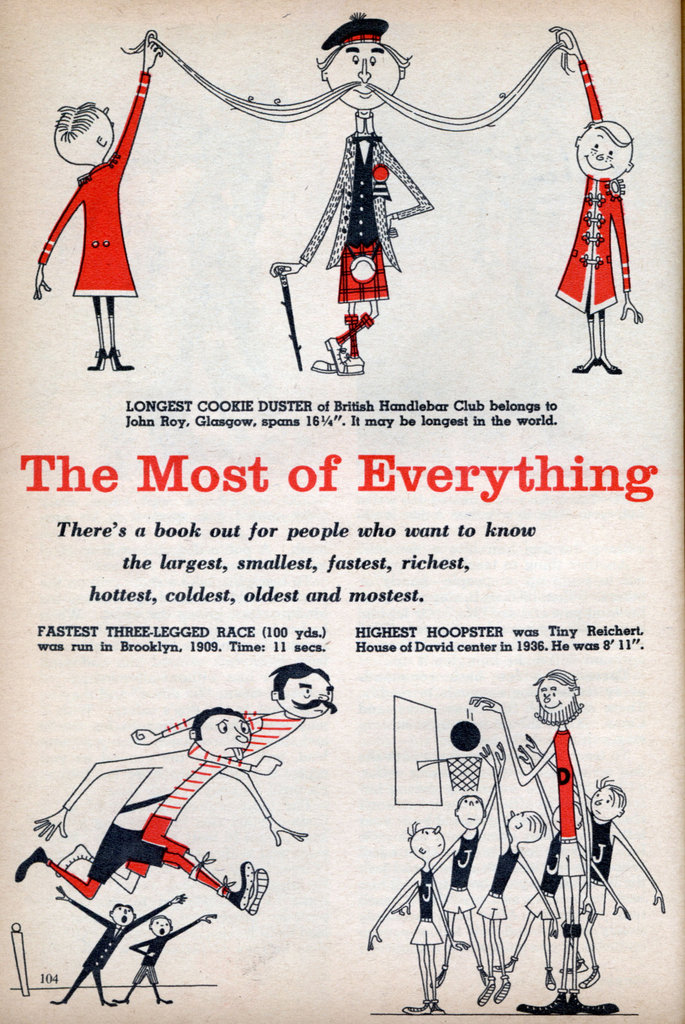 The Most of Everything

There’s a book out for people who want to know the largest, smallest, fastest, richest, hottest, coldest, oldest and mostest.

ARGUING about which is the mostest of anything, like the highest point in Our State or the longest bone in the human body, just seems to go with beer. Some say pretzels go better, while another body of expert opinion favors cheese and raw onions. But arguing about the mostest rates high as a diversion of malt brew enthusiasts, and that is no doubt why the ancient house of Arthur Guinness Son, Ltd., Dublin, has published The Guinness Book Of Superlatives.

The Guinness Book Of Superlatives, or GBOS, is half-humorously designed to settle arguments but in actual practice the book will be used to start fights rather than settle them. “The oldest recorded age of a horse is 62 years,” you can now announce in Gilhooley’s Gaelic Interlude Bar and Grill, and Wham! you’re into it.

A number of facts listed in the GBOS are only the starting points of discussionâ€” for instance, the longest-boiling egg. It’s the ostrich egg and the GBOS says it takes 40 minutes to boil. Hard or soft?

Longest English word in the Oxford English Dictionary is floccinauchinihili-pilification. Look it up.

In the ever-popular field of crime, the most productive murderer was Herman Webster Mudgett who did in an estimated 150 women in Chicago in the last century. Biggest robbery was of $9,878,400 worth of gold bars from the German National Gold Reserves in June, 1945, by U. S. military personnel and German civilians. The biggest bigamist was Mrs. Theresa Vaughn of Sheffield, England, who confessed to 61 marriages in five years. The book with the most superlatives is the Guinness Book Of Superlatives, $2.95, published by Superlatives, Inc., 275 Madison Avenue, New York.â€”Harvey Gardner