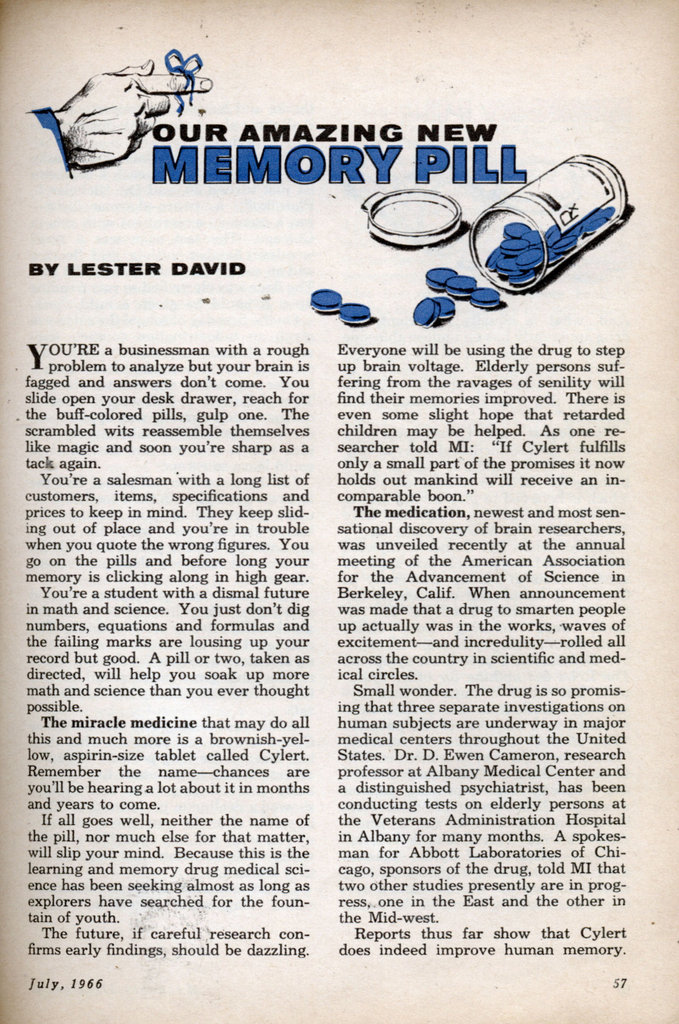 YOU’RE a businessman with a rough problem to analyze but your brain is fagged and answers don’t come. You slide open your desk drawer, reach for the buff-colored pills, gulp one. The scrambled wits reassemble themselves like magic and soon you’re sharp as a tack again.

You’re a salesman with a long list of customers, items, specifications and prices to keep in mind. They keep sliding out of place and you’re in trouble when you quote the wrong figures. You go on the pills and before long your memory is clicking along in high gear.

You’re a student with a dismal future in math and science. You just don’t dig numbers, equations and formulas and the failing marks are lousing up your record but good. A pill or two, taken as directed, will help you soak up more math and science than you ever thought possible.

The miracle medicine that may do all this and much more is a brownish-yellow, aspirin-size tablet called Cylert. Remember the name—chances are you’ll be hearing a lot about it in months and years to come.

If all goes well, neither the name of the pill, nor much else for that matter, will slip your mind. Because this is the learning and memory drug medical science has been seeking almost as long as explorers have searched for the fountain of youth.

The future, if careful research confirms early findings, should be dazzling.

Everyone will be using the drug to step up brain voltage. Elderly persons suffering from the ravages of senility will find their memories improved. There is even some slight hope that retarded children may be helped. As one researcher told MI: “If Cylert fulfills only a small part of the promises it now holds out mankind will receive an incomparable boon.”

The medication, newest and most sensational discovery of brain researchers, was unveiled recently at the annual meeting of the American Association for the Advancement of Science in Berkeley, Calif. When announcement was made that a drug to smarten people up actually was in the works, waves of excitement—and incredulity—rolled all across the country in scientific and medical circles.

Small wonder. The drug is so promising that three separate investigations on human subjects are underway in major medical centers throughout the United States. Dr. D. Ewen Cameron, research professor at Albany Medical Center and a distinguished psychiatrist, has been conducting tests on elderly persons at the Veterans Administration Hospital in Albany for many months. A spokesman for Abbott Laboratories of Chicago, sponsors of the drug, told MI that two other studies presently are in progress, one in the East and the other in the Mid-west.

And, what is equally important, the drug apparently has no undesirable side effects. Dr. Cameron told MI recently: “There certainly is enough coming to light in our tests on people to make me feel that this is an investigation worth pursuing.”

How does it work? Cylert apparently increases the production of a key chemical found in the brain as well as in all living cells—RNA or ribonucleic acid— which is believed to play a vital role in memory and learning. Scientists have dubbed RNA the memory molecule.

Indeed, when Dr. Cameron injected the RNA substance itself into some 50 aged patients at McGill University in Canada, he found clear-cut memory improvement in many instances. The patients were suffering from either presenile or senile psychoses, with memory disturbance a prominent symptom. The RNA did nothing for other symptoms but when it came to memory-jogging, excellent to fair results were obtained in a majority of the patients. “The effects,” Dr. Cameron reported, “lasted about three or four months. Until now, nothing on God’s earth showed any capacity for improving human memory. Now profound discoveries have been made and we can do something we were never able to do before.”

The development of Cylert climaxes a series of fascinating explorations conducted all over the world on one of science’s most baffling frontiers—how man thinks and learns. To understand how it all came about, start with this remarkable experiment.

Three young scientists—Dr. Glasky and Dr. Lionel Simon, each a biochemist just turned 30, and Dr. Nicholas P. Plotnikoff, a neuro-pharmacologist— ran a memory experiment with rats in Chicago. The test cage was a small wooden chamber with a grid flooring and an escape platform outside the box. The floor was electrified so rats treading upon it could be given a mild shock.

On the first day of school the rats were given an indoctrination course: they were allowed to remain inside the chamber for 15 seconds, after which a buzzer sounded for the next ten seconds. Then followed a five-second interval during which current was applied and the buzzer sounded simultaneously. The idea was to find out how fast the rats could learn to escape.

On the second day of school half the test rats got Cylert in their food 30 minutes before being put through the buzzer-shocker test, while the others got nothing. Testing proceeded with the doctors watching how their pupils were reacting.

The ones that got Cylert reacted amazingly. They learned to avoid the . shock within five to seven seconds. The untreated rats took much longer to wise up and make a beeline for the exit. Final results: rats given the chemical learned four to five times faster than untreated rats.

Additional testing also disclosed that Cylert-treated fats retained what they had learned for long periods while the others “failed to maintain their previously learned responses and rapidly showed a decline in performance.” That is, weeks after the tests, the smartened-up rats were still hep enough to scoot to safety while the others had forgotten all they learned.

Cylert contains a brain stimulant called magnesium pemoline, which boosts the production of RNA in the cells. The drug has been used in Europe for the past several years as a mild central-nervous-system stimulant. It’s not related chemically to the notorious pep pills or amphetamines.

Doctors aren’t sure how RNA manages to improve brain performance and there is controversy over the whole matter. But one widespread theory is that RNA molecules carry thoughts in coded form, much as DNA molecules carry genetic information. DNA (deoxyribonucleic acid) has been called the code of life because it governs inheritance and all our functions so RNA has • been labeled by many scientists as the code of memory and learning.

According to theory, when a particular event or thought occurs to you it is coded upon an RNA molecule, or upon a protein molecule created by RNA, and stored in one of the billions of nerve cells of your brain. It remains there, ready to come to the forefront of your mind whenever you want to call it up. If all this sounds like you’ve got something of a computer setup in your noggin, that’s exactly the point.

Scientific evidence that RNA definitely is involved in memory has come from many parts of the U.S. and Europe. Neuro-biologist Holger Hyden of the University of Goteborg, Sweden, discovered that learning can increase the RNA in the brains of rats considerably. Dr. Hyden analyzed the RNA content of untrained rat brains, then proceeded to teach a large number of rats to perform intricate laboratory stunts. After months of training the brain cells of the educated rats were analyzed. He discovered a 35 per cent increase in RNA!

At UCLA Dr. Allan Jacobson and a team set a food cup inside a rat cage. When a clicking sound was heard it meant that there was food in the cup. No sound, no chow. A group of lab rats soon learned to go to the cup when they heard the sound.

Step No. 2 was to inject RNA from the brains of the educated rats into seven untrained rodents. The latter then ‘ were put into the cage and the cups set out. Even though none had prior instruction they responded to the clicks.

At the University of Michigan Dr. James McConnell, a psychologist, gave a batch of flatworms lessons in responding to electrical shocks. Then the worms were ground up and fed to other worms, who not only enjoyed their brother worms but, astoundingly enough, inherited their education! The RNA in the educated flatworms was passed on to the untrained ones, and with it the trained response to the electrical hotfoot.

The UCLA and Michigan tests indicated that learning may be transferrable through RNA. There also is evidence that lab subjects can be made stupider by giving them RNA-inhibiting drugs.

A team of investigators at the Mental Health Research Institute on the campus of the University of Michigan divided goldfish into two test teams. Into the brains of one group the researchers injected two antibiotic drugs. The others got no drugs. Then both teams were trained to avoid electric shock traps in tanks.

The fish that did not receive the drugs remembered where the traps were for months—but the treated ones forgot within three days! The memory-destroying drugs they got are Puromycin and Acetoxycycloheximide, both of which are known to impair the manufacture of RNA in cells.

How soon will you be able to get smart pills from your drug store? At present, Cylert is classified as an experimental drug. According to revised, tightened Food & Drug Laws, the manufacturer must present adequate evidence of safety and effectiveness to government authorities before permission to market the medication is granted. •