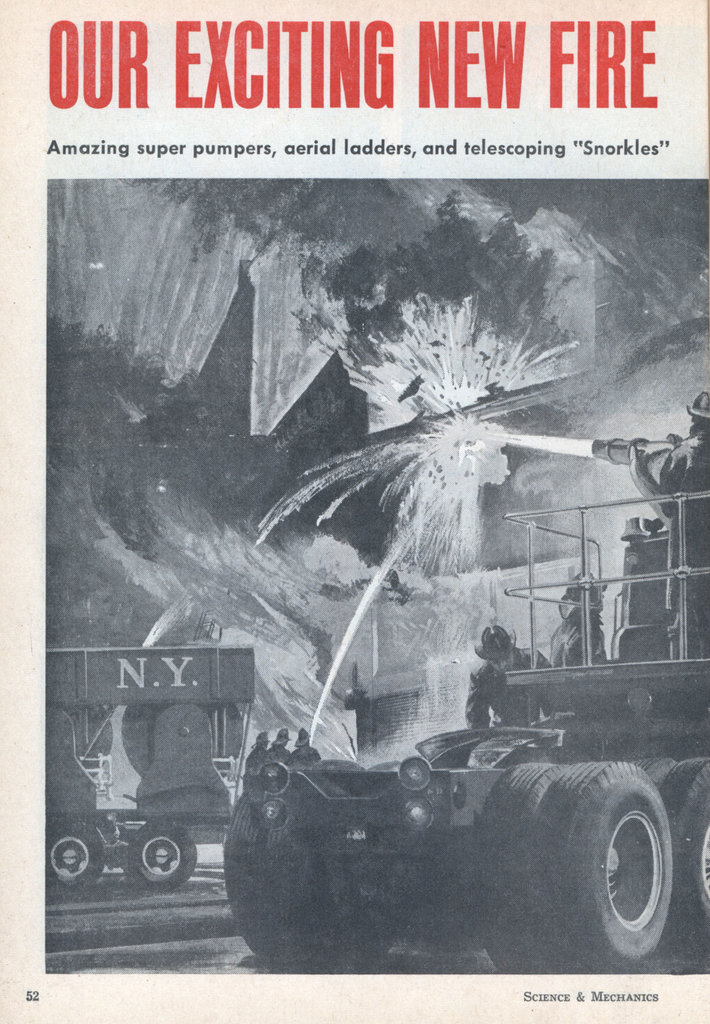 THE whining scream of a fire engine is one of the most chilling sounds on earth. Who hasn’t thrilled to the siren sound, looked up in dread as the engine raced past, and then perhaps started running to where black clouds of smoke billow up into the air, shot through with tongues of scarlet flame?

The sight and sounds of a fire crew going into combat never fail to draw and hold the spectator. Will the fire roar out of control? Will the firemen be able to smother the flames before too much damage is done? Are there humans trapped behind that cloud of smoke? Fires are one of the great dramas of modern life, played out by men in helmets and rubber coats, and we are usually the nervous, nail-biting audience.

In the majority of cases we know how this drama will end: the firemen will win their fight, the blaze will be brought under control before it engulfs a whole community. But sometimes the outcome is in doubt for hours, days, and—in the case of forest fires—for weeks. But now, with the help of new, exciting fire engines and firefighting equipment, firemen are going into the frontlines with a better than ever chance of defeating their enemy quickly and efficiently. And thanks particularly to new super pumpers and aerial ladder trucks, potential fire victims will be saved and more firemen will be spared. Here’s what can be done today: —Firemen can rise above the tallest fires on new platforms and either fight or direct the battle from overhead.

—They can shoot long extension ladders to upper stories of buildings to rescue trapped victims or deliver water.

—They can, with tremendous water pressure, actually blast entry holes in the sides of concrete buildings.

—Soon, with double 40-ft. monster trucks, they will fight fires 70 stories up, and they will do this from the ground! Still, they will have enough pressure to blast a hole in the high wall to get to the fire.

Can you recognize these new heavy fire fighters? Chances are you have one of them on the fire department in your own town.

Two designations cover most heavy fire trucks. The first, and presently most popular, is the “cab forward” model. As the term implies, the driver and crew are positioned forward with the engine nearer the mid-section of the unit. This model is preferred by many departments because of its visibility and stability. Remember, these trucks must go fast through close quarters.

Still preferred by many departments, particularly in smaller towns, is the older “engine forward” truck. Again as the name indicates, the crew is seated to the rear of the engine, with the power plant located forward under a long hood. An advantage here is the straightening of all drive shafts to pumps, power take-offs, etc.

Five major manufacturers build most of the huge fire trucks in use in the United States today.

One of the biggest names in fire apparatus design and manufacture is Crown and the Crown “Firecoach.” This new Firecoach is available in a complete line of custom models, depending on the needs of the city, with optional cab designs, compartmentation and, a full range of pumping capacities from 500 to 2000 gallons per minute.

Crown fire trucks are built on a special Z-type frame for strength and endurance. They also feature an unusual removable front corner panel on their cab-forward models for ease of repair and inspection of electrical junctions, clutch, brake, steering gear and other parts above and below the front floor board.

You can recognize Crown equipment as it thunders past by the vertically mounted twin headlights, the oversize red horizontal directional signals just beneath the windshield, and the distinctive Crown emblem. In the front, dead center, is a huge built-in chrome siren.

Aerial ladder trucks, the most dramatic and recognizable at a fire, are a specialty of Pirsch. In fact, these new units are known as “America’s Finest Aerial Ladder Trucks” by many firemen. Pirsch also manufactures a unit with the Pittman “Snorkel” aerial platform.

The Pirsch Junior Aerial Ladder is a smaller unit built especially for efficient operation in smaller towns and in residential areas of cities. Controlled electrically by one-man push buttons, the ladders on this unit extend to 50 and 55 ft.

That monster you see roaring off to a fire could very well be the Pirsch Senior Aerial Ladder Truck. This tractor-trailer unit can deliver water or rescue victims after extending its ladder to a remarkable 100 ft. from a special full hydraulic hoisting and operating control stand.

When travelling, the “Senior” has a tiller man at the rear. He steers the huge trailer through traffic and around tight turns.

Another center mounted, built-in siren (just below a Pirsch emblem) will identify this equipment. Units from all manufacturers will, of course, have a flashing or rotating red light atop the cab or windshield.

Offering one of the largest selections of new fire equipment is Seagrave, a name well known for fire trucks. They use not only their own 300-hp V-12 engine, but numerous 6- and 8-cylinder engines and diesels built by other manufacturers. Seagrave also builds most of their own chassis, with a solid Z-type frame. Amidships, and low in the frame to lower the center of gravity, is Seagrave’s famed “Heart of Gold” pump, the only solid bronze unit in the industry.

Engine forward and cab forward pumpers, chemical and foam units, ladder and aerial ladder trucks and a 90-ft. aerial platform unit all bear the Seagrave emblem for 1965. Their new tractor-trailer aerial ladder truck has the only completely enclosed tiller seat in the country.

A special new unit by Seagrave is the “Vigilante,” a standard pumping engine which is also an unlimited capacity foam unit. Perfect for fighting fires in petroleum plants, highway accidents, tank trucks and railroad cars and airplane crashes, a Vigilante truck has just gone on duty with NASA at the Manned Spacecraft Center.

Seagrave units have a center mounted siren just above a huge chromed hose connection. The name Seagrave also appears front and side. Another distinctive marking, a giant bell, is on the right front corner of the cab.

Brand new at this famed fire equipment company is a towering water platform unit called the “Aero Chief.” Only recently put into production, this unit will extend to heights of 70, 80, or 90 feet, and will carry water through a 6-in. line to the firefighter on the platform. How much water? A big 2000 gpm can be pumped from the high 60×42-in. bucket.

The Aero-Chief has a nesting boom so that in its retracted position the overall height, unlike other such units, is only one inch over 9 feet. This was designed to enable the unit to pass under low bridges and tree limbs on the way to a fire.

How do you recognize this unit? By name, of course, and by the bell on the right front bumper. Also by the obvious 6-in. water pipe running up the right side of the boom to the basket, visible when the boom is folded for travelling or extended.

The future of fire fighting equipment is embodied in new units from Mack. First, and presently in use, is the Mack Aerial Platform. This boom assembly consists of four sections, three of which telescope. On top of the boom is a 15-sq. ft. platform which is self-leveling and which can rise to 75 feet and pump 1000 gpm. Unique is a 60,000 BTU heater which blows hot air up through the inside of the boom to prevent ice accumulation in freezing weather. The boom is mounted on a standard Mack fire fighting truck.

Two men operate the Mack boom, the Pittman “Snorkel,” and other standard aerial platforms. The man on the platform controls, with one hand, the motion of the boom and bucket, while a man at ground level can over-ride the platform control in case of emergency.

And the future? Presently under construction at the Mack plant is the world’s most powerful fire fighting apparatus. Ordered by the fire department of New York City, these two tremendous units (called the Super Pumper and the Super Hose Tender) will cost a total of $875,000.

Each of these units will be 40 ft. long, 11 ft. high, 8 ft. wide. The pumper will be powered by a 2400-hp British Napier-Deltic diesel engine, an engine normally used to drive a 100-ton locomotive. Ready for fire fighting duty in 1965, the pumper will move 4400 gpm (half a tank car full every minute) 70 stories into the air . . . and will still have pressure enough to blast a hole through the side of the building! (See cover of this issue.) In fact, great care will be taken to clear firemen and onlookers from the area where the pumper is being used since the pressure developed by the powerful engine will be enough to tear a man apart!

When called, the super pumper and hose tender will proceed together until they reach an area several blocks from the fire. There, the pumper will stop and hook up to a major water supply hydrant, or a pond or river. The hose tender will move quickly on, laying hose as it goes. By the time the tender reaches the scene of action, firemen can drop off the now-empty hose carrying trailer, hook up to the water gun atop the tractor, and go to work.

Water pumped horizontally from this amazingly powerful fire fighting unit will carry over 1200 ft. By connecting additional super pumpers and tenders together, there is no limit to the distance that can be covered between water source and fire.

But there will always be one problem. Fire! However, with these new, super-efficient fire fighting units, today’s firemen are defeating their enemy more easily.