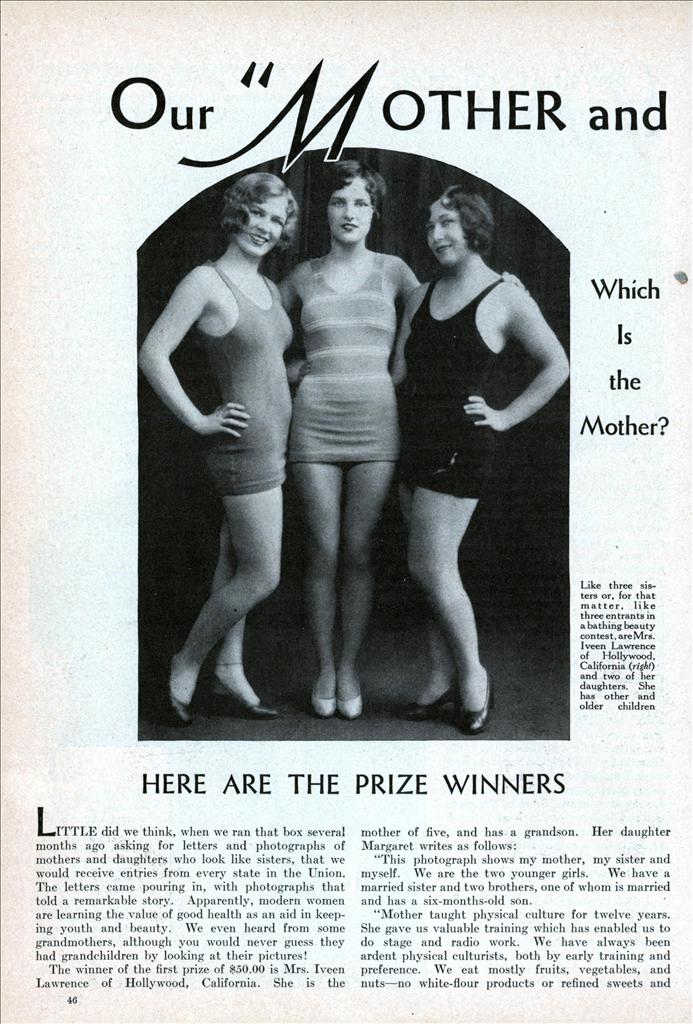 Our “Mother and Daughter” Contest

Which Is the Mother?

HERE ARE THE PRIZE WINNERS LITTLE did we think, when we ran that box several months ago asking for letters and photographs of mothers and daughters who look like sisters, that we would receive entries from every state in the Union. The letters came pouring in, with photographs that told a remarkable story. Apparently, modern women are learning the value of good health as an aid in keeping youth and beauty. We even heard from some grandmothers, although you would never guess they had grandchildren by looking at their pictures!

The winner of the first prize of $50.00 is Mrs. Iveen Lawrence of Hollywood, California. She is the mother of five, and has a grandson. Her daughter Margaret writes as follows: “This photograph shows my mother, my sister and myself. We are the two younger girls. We have a married sister and two brothers, one of whom is married and has a six-months-old son.

“Mother taught physical culture for twelve years. She gave us valuable training which has enabled us to do stage and radio work. We have always been ardent physical culturists, both by early training and preference. We eat mostly fruits, vegetables, and nuts—no white-flour products or refined sweets and very little meat. We neither smoke nor drink.

“Mother is a real pal to us, and has kept young spiritually, mentally and physically. We .always have to explain to strangers that she is our mother, and not a sister, or the wife of one of the boys.”

The second prize of $25.00 goes to Mrs. Herman Bragg of Huntsville, Missouri. There are three little Braggs, all being raised the physical culture way. “Here comes a country woman with her oldest daughter to enter your contest. My big job in life is to keep our home clean and attractive, and to serve wholesome well-balanced meals which will keep my family in good physical condition. But not all my time is spent keeping house. I have several hobbies which I ride hard— oratory, dancing, gardening and swimming.

“We start the, day with setting-up exercises, and plenty of water, inside and out. Digging in the garden affords wholesome outdoor exercise for the whole family, and all year around there are hikes, which my husband and I enjoy as much as the children. When summer comes, we spend most of our spare time in the water, for we are never happier than when Dad calls out: ‘All aboard for the lake!'”

What a fortunate family! Mother and Dad and the kids—all healthy and full of the joy of living.

“Having the good fortune to live in southern California,” she writes, “we can indulge in outdoor sports all year around. Swimming and horseback riding are our favorites. We also belong to a gymnasium which we attend regularly. My daughter is thirteen and I am thirty-two. I have a younger daughter, aged ten, who is also very much interested in acrobatics.

“I feel younger today than I did fifteen years ago, and I expect to go on getting a kick out of life for many years to come.”

California seems to be well represented in this contest. One might almost think we owned real estate there! San Francisco is the home of Mrs. Myrtle Loomis, winner of the fourth prize of $10.00. Mrs. Loomis writes as follows: “I agree with you that it is unnecessary for a woman to become old merely because she has children. If she starts young enough, and keeps a healthy body and an optimistic mind—and they are correlative—she need not look other than like a big sister to her children. I have three girls between ten and seventeen. People quite frankly disbelieve I am the mother of my oldest girl until they hear her call me ‘Mamma.’ ”

When we came to judging this contest, we wished that we had more than four prizes to award, for after the winners were selected, there were many excellent photographs remaining. Some of these photographs, by way of “honorable mention,” will be published in “Our Physical Culture Girls” department in an early issue.