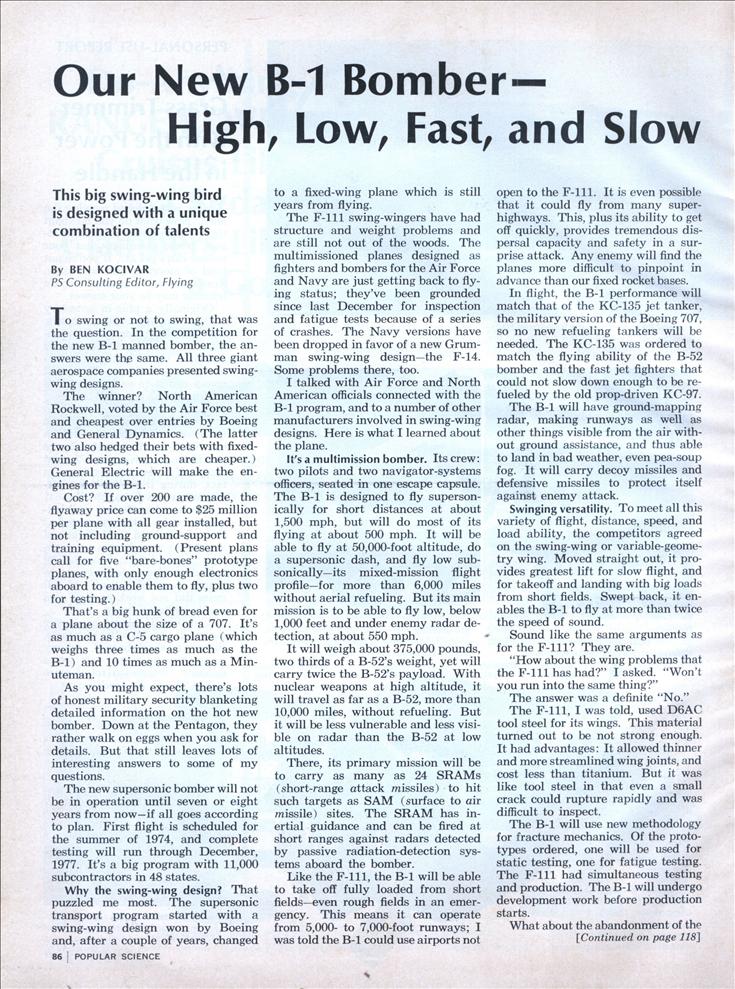 Our New B-1 Bomber-High, Low, Fast, and Slow

PS Consulting Editor, Flying To swing or not to swing, that was the question. In the competition for the new B-1 manned bomber, the answers were the same. All three giant aerospace companies presented swing-wing designs.

The winner? North American Rockwell, voted by the Air Force best and cheapest over entries by Boeing and General Dynamics. (The latter two also hedged their bets with fixed-wing designs, which are cheaper.) General Electric will make the engines for the B-1.

Cost? If over 200 are made, the flyaway price can come to $25 million per plane with all gear installed, but not including ground-support and training equipment. (Present plans call for five “bare-bones” prototype planes, with only enough electronics aboard to enable them to fly, plus two for testing.) That’s a big hunk of bread even for a plane about the size of a 707. It’s as much as a C-5 cargo plane (which weighs three times as much as the B-1) and 10 times as much as a Minuteman.

As you might expect, there’s lots of honest military security blanketing detailed information on the hot new bomber. Down at the Pentagon, they rather walk on eggs when you ask for details. But that still leaves lots of interesting answers to some of my questions.

The new supersonic bomber will not be in operation until seven or eight years from nowâ€”if all goes according to plan. First flight is scheduled for the summer of 1974, and complete testing will run through December, 1977. It’s a big program with 11,000 subcontractors in 48 states.

Why the swing-wing design? That puzzled me most. The supersonic transport program started with a swing-wing design won by Boeing and, after a couple of years, changed to a fixed-wing plane which is still years from flying.

The F-111 swing-wingers have had structure and weight problems and are still not out of the woods. The multimissioned planes designed as fighters and bombers for the Air Force and Navy are just getting back to flying status; they’ve been grounded since last December for inspection and fatigue tests because of a series of crashes. The Navy versions have been dropped in favor of a new Grumman swing-wing designâ€”the F-14. Some problems there, too.

I talked with Air Force and North American officials connected with the B-1 program, and to a number of other manufacturers involved in swing-wing designs. Here is what I learned about the plane.

It’s a multimission bomber. Its crew: two pilots and two navigator-systems officers, seated in one escape capsule. The B-1 is designed to fly supersonically for short distances at about 1,500 mph, but will do most of its flying at about 500 mph. It will be able to fly at 50,000-foot altitude, do a supersonic dash, and fly low sub- sonicallyâ€”its mixed-mission flight profileâ€”for more than 6,000 miles without aerial refueling. But its main mission is to be able to fly low, below 1,000 feet and under enemy radar detection, at about 550 mph.

It will weigh about 375,000 pounds, two thirds of a B-52’s weight, yet will carry twice the B-52’s payload. With nuclear weapons at high altitude, it will travel as far as a B-52, more than 10,000 miles, without refueling. But it will be less vulnerable and less visible on radar than the B-52 at low altitudes.

There, its primary mission will be to carry as many as 24 SRAMs (short-range attack missiles) to hit such targets as SAM (surface to air missile) sites. The SRAM has inertial guidance and can be fired at short ranges against radars detected by passive radiation-detection systems aboard the bomber.

Like the F-111, the B-1 will be able to take off fully loaded from short fieldsâ€”even rough fields in an emergency. This means it can operate from 5,000- to 7,000-foot runways; I was told the B-1 could use airports not open to the F-111 It is even possible that it could fly from many superhighways. This, plus its ability to get off quickly, provides tremendous dispersal capacity and safety in a surprise attack. Any enemy will find the planes more difficult to pinpoint in advance than our fixed rocket bases.

In flight, the B-1 performance will match that of the KC-135 jet tanker, the military version of the Boeing 707, so no new refueling tankers will be needed. The KC-135 was ordered to match the flying ability of the B-52 bomber and the fast jet fighters that could not slow down enough to be refueled by the old prop-driven KC-97.

The B-1 will have ground-mapping radar, making runways as well as other things visible from the air without ground assistance, and thus able to land in bad weather, even pea-soup fog. It will carry decoy missiles and defensive missiles to protect itself against enemy attack.

Swinging versatility. To meet all this variety of flight, distance, speed, and load ability, the competitors agreed on the swing-wing or variable-geometry wing. Moved straight out, it provides greatest lift for slow flight, and for takeoff and landing with big loads from short fields. Swept back, it enables the B-1 to fly at more than twice the speed of sound. Sound like the same arguments as for the F-111? They are.

The answer was a definite “No.”

The F-111, I was told, used D6AC tool steel for its wings. This material turned out to be not strong enough. It had advantages: It allowed thinner and more streamlined wing joints, and cost less than titanium. But it was like tool steel in that even a small crack could rupture rapidly and was difficult to inspect.

The B-1 will use new methodology for fracture mechanics. Of the prototypes ordered, one will be used for static testing, one for fatigue testing. The F-111 had simultaneous testing and production. The B-1 will undergo development work before production starts.

What about the abandonment of the swing-wing design for our commercial supersonic transport?

Whippet vs. ferret. This was an economic rather than a performance or safety problem. The SST and the B-1 are different animals, even though both must fly at more than twice the speed of sound. The SST, incidentally, will be bigger, and faster by about 300 mph. Its imperativeâ€”to carry passengers profitablyâ€”changes the position of landing gear and engines. Also, it is designed to cruise long distances at high-altitude supersonic speeds.

The canard. The low-altitude requirement can mean terribly bumpy riding, not only because of air turbulence but because the B-1 will have to fly up and down hills and mountains. To make this ride smoother and more tolerable for the crew, the B-1 has a small forward wing, a canard, that automatically changes its angle to make the flight less choppy.

One of the experts I interviewed was Warren Swanson, now B-1 program manager for North American Rockwell and previously general manager of the company’s B-70 program. The B-70 had also been a supersonic bomber design, but was abandoned as such and became a high-speed research plane.

He explained that the B-70, which also had a canard wing up front, was a “point” design, made to cruise only at Mach 3 (2,000 mph) at high altitude. The B-1, on the other hand, is of “flexible” design for operation at both high and low altitudes. The B-70 was also a “variable-geometry” plane, even though the wings did not swing back and forth. Giant movable wing tips took up almost a third of the wing. They moved straight out for takeoff (or landing) and then dropped down to reduce lift and drag for high-speed flight. When the tips were down, they gave a rudder-like effect; as a result, the tail rudder could be smaller to provide less drag.

But it was the B-70’s single-point concept that probably kept it from further development. Russian defenses against high-altitude supersonic bombers improved and forced development of a new, low-level penetration concept. According to some authoritative sources, low-level penetration at high subsonic speeds (under 700 mph) provides almost as much survivability as supersonic dashes at low altitude, and uses far less fuel; hence, possible range increases.

Instruments galore. On-board computers and inertial navigation systems will enable the B-1 to take off and fly an entire mission with the crew monitoring. The avionics package, still to be worked out, will use some items developed for the bomber version of the F-111. It will include radar for air-to-air and air-to-ground defensive and offensive weapons, infrared and electro-optical sensors, terrain-following radar, and map-matching for bomb-damage assessment.

Though not officially released, the word is that all three competitors took a different approach to build the same bomber.

Boeing put the engmes in the rear, mounted on the fuselage in the same manner as on the 727 airliner.

â€¢ General Dynamics mounted their B-1 engines under the swing-wing, on swivel pylons to keep them pointed dead ahead as the wings were moved back and forth. This same method is used to carry the missiles mounted under the wings of their F-111.

North American mounted its engines under the fixed position of the wing, near the fuselage, with intakes ahead of the leading edge of the wing. (The four GE engines, incidentally, will have a thrust of about 30,000 pounds each. The design is an offshoot of the engines developed for the B-70 and the C5A.) Passing the word. There’s a lot of data exchange between builders of high-performance planes, leading to greater efficiency and safety. The small canard wing that helps smooth the B-1’s ride can do the same job for commercial airliners and, says Warren Swanson, it could be retro-fitted on existing craft. In encounters with severe clear air turbulence, it would add safety because it works automatically and reduces stress on the wings. Data on the pivot point of the Boeing swing-wing supersonic transport design was used for the B-1. There were also lessons learned from the B-70â€”even from the rocket-powered X-15, on which Swanson also worked.

Actuators developed for the X-15 to operate at high temperatures of 250 to 700 degrees F will also be used in the B-1.

Also, North American is looking at the control system of Boeing’s SST. In an opposite swap, they have provided transonic flight data from the B-70, which flew at Mach 3, to British and French engineers working on transonic problems for the Mach-2 Concorde transport. Swanson reports they are still not able to predict accurately speed data between Mach 0.95 and Mach 1.4, just below and above the speed of sound.

In researching the B-1, I ran across one prediction that is nothing less than a blockbuster, if it turns out to be true. It was denied by both Air Force and North American officials. But my source was so well placedâ€”an extremely knowing, experienced, and responsible authority, closely involved with the supersonic transport programâ€”I cannot ignore it.

He told me that even though the B-1 program had been five years in study before the decision was made to go ahead with the swing-wing, he considered it entirely possible that, like the Boeing supersonic transport, the B-1 design might be radically changed â€”even to the extent that a fixed-wing design might emerge, and the swing-wing idea be shelved again. If this happens, we will have once more come full circle.

The more things change, the more they stay the same!