The Hollywood High Tower elevator is still there and still in use.

To that let me add this aerial view from Google Maps. 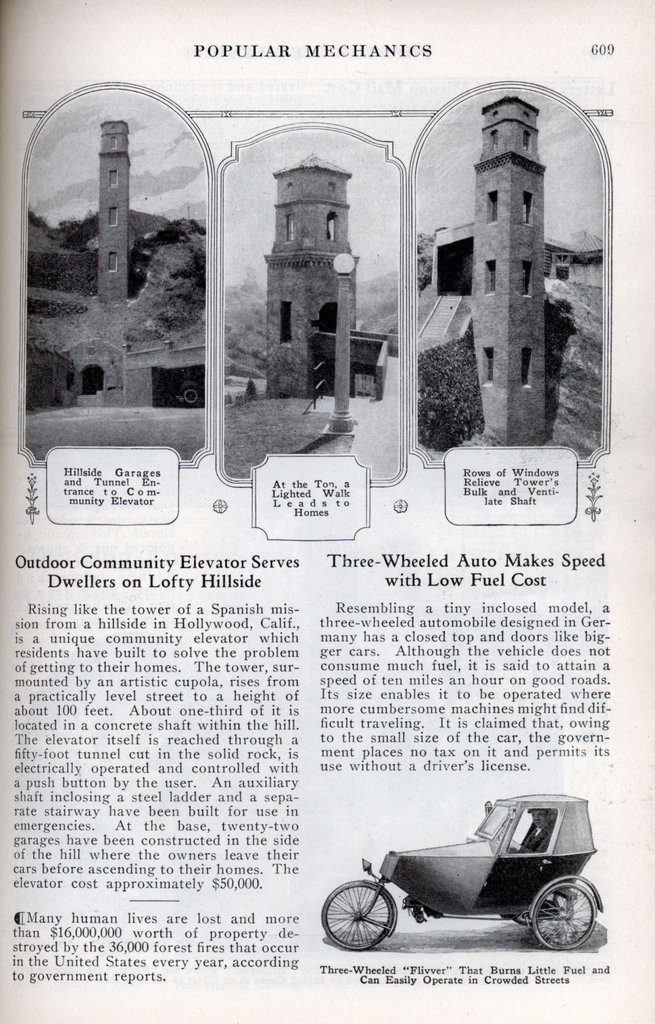 Rising like the tower of a Spanish mission from a hillside in Hollywood, Calif., is a unique community elevator which residents have built to solve the problem of getting to their homes. The tower, surmounted by an artistic cupola, rises from a practically level street to a height of about 100 feet. About one-third of it is located in a concrete shaft within the hill. The elevator itself is reached through a fifty-foot tunnel cut in the solid rock, is electrically operated and controlled with a push button by the user. An auxiliary shaft inclosing a steel ladder and a separate stairway have been built for use in emergencies. At the base, twenty-two garages have been constructed in the side of the hill where the owners leave their cars before ascending to their homes. The elevator cost approximately $50,000.

Resembling a tiny inclosed model, a three-wheeled automobile designed in Germany has a closed top and doors like bigger cars. Although the vehicle does not consume much fuel, it is said to attain a speed of ten miles an hour on good roads. Its size enables it to be operated where more cumbersome machines might find difficult traveling. It is claimed that, owing to the small size of the car, the government places no tax on it and permits its use without a driver’s license.

Many human lives are lost and more than $16,000,000 worth of property destroyed by the 36,000 forest fires that occur in the United States every year, according to government reports.