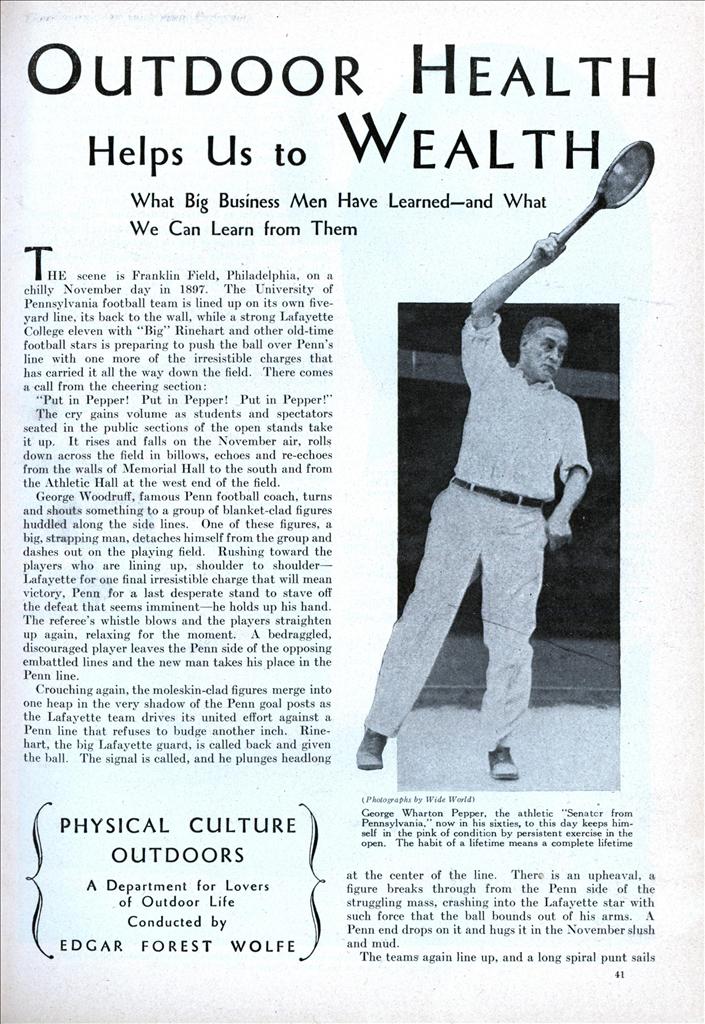 Outdoor Health Helps Us to Wealth

THE scene is Franklin Field, Philadelphia, on a chilly November day in 1897. The University of Pennsylvania football team is lined up on its own five-yard line, its back to the wall, while a strong Lafayette College eleven with “Big” Rinehart and other old-time football stars is preparing to push the ball over Penn’s line with one more of the irresistible charges that has carried it all the way down the field. There comes a call from the cheering section: “Put in Pepper! Put in Pepper! Put in Pepper!”

The cry gains volume as students and spectators seated in the public sections of the open stands take it up. It rises and falls on the November air, rolls down across the field in billows, echoes and re-echoes from the walls of Memorial Hall to the south and from the Athletic Hall at the west end of the field.

George Woodruff, famous Penn football coach, turns and shouts something to a group of blanket-clad figures huddled along the side lines. One of these figures, a big, strapping man, detaches himself from the group and dashes out on the playing field. Rushing toward the players who are lining up, shoulder to shoulder— Lafayette for one final irresistible charge that will mean victory, Penn for a last desperate stand to stave off the defeat that seems imminent—he holds up his hand. The referee’s whistle blows and the players straighten up again, relaxing for the moment. A bedraggled, discouraged player leaves the Penn side of the opposing embattled lines and the new man takes his place in the Penn line.

Crouching again, the moleskin-clad figures merge into one heap in the very shadow of the Penn goal posts as the Lafayette team drives its united effort against a Penn line that refuses to budge another inch. Rinehart, the big Lafayette guard, is called back and given the ball. The signal is called, and he plunges headlong at the center of the line. There is an upheaval, a figure breaks through from the Penn side of the struggling mass, crashing into the Lafayette star with such force that the ball bounds out of his arms. A Penn end drops on it and hugs it in the November slush and mud.

The teams again line up, and a long spiral punt sails from behind the Penn goal line down the field. The spotless escutcheon of the famous Penn football team of ‘!)7 remains untarnished.

The player who had broken through that hard- charging Lafayette line and saved the day for Penn was George Wharton Pepper, later to become one of the most outstanding figures in the United States Senate at Washington.

The team that he saved from defeat that November day on Franklin Field was George Woodruff’s famous Penn football team of 1897 that established a record that has never been equaled. It had played through the entire season without any player being removed from the game because of injuries—a remarkable testimonial to the physical fitness of its players when you consider that those were the days of “rough football.”

It also serves as a fitting, illustration of the physical fitness and ruggedness of George Wharton Pepper as an athlete. He was one of the eleven stalwarts of a famous team. Just recently his name appeared on an all-time All-Star Penn football selection.

In addition to being a football star at the University of Pennsylvania in the late ‘AO’s, Pepper played on the baseball and cricket teams—Penn played cricket in those days—rowed on the crew, and won medals in the hammer throw and the half-mile race.

During his college days he spent his summer vacations in the North Woods on canoe trips, tramping the trails, living the life of the outdoorsman—and he still does. Today, in his sixties, George Wharton Pepper, who has known close to the highest honors that can be accorded him by his State, spends a portion of each year in the Maine woods in the company of a guide. On these trips into the big woods he insists on doing as much of the packing and camp work as the guide, pitting his strength and endurance against that of the trained woodsman. He carries canoe and camp dunnage across the portages with as much ease as the trained woodsman and with more cheerfulness—a fact which causes the woodsmen to wonder where he gets his endurance.

These woodsmen do not know that the “Senator from Pennsylvania” has stacked the cards on them. Strong and athletic from youth, Mr Pepper to this day keeps himself in continual condition by persistent training in the outdoors. He is an expert swimmer, and indulges in this aquatic sport continually throughout the summer. He is an ardent walker—not of the city streets but taking long hikes out into the country. One of his favorite hikes is over the rough and rocky hillsides of the Wissahickon Creek, where he climbs the steepest places through the thick woods. This continual keeping in the best of physical condition is the source of his tremendous energy, that is the wonder of all who know him.

In this respect he resembles that other great American—Theodore Roosevelt. But, unlike Roosevelt, George Wharton Pepper was endowed by nature with a vigorous frame. He never has abandoned habits of strenuous physical exercise in the open air, and right through middle life and into his sixties he has retained the bodily strength of the oarsman, football player, and outdoorsman. When he went to Washington as successor to the late Senator Boise Penrose, Pepper promptly invaded the Capitol tennis courts, which had been mostly idle after the passing of Roosevelt, finding an ardent companion in this outdoor activity in the former President’s son, Theodore, Jr. Pepper immediately revived the “Tennis Cabinet” that had been formed by President Roosevelt and then permitted to lapse when he went out of office.

Theodore Roosevelt’s place in American history is unique; the counterpart of such a man does not appear twice in a generation. Yet it is no exaggeration to say that in George Wharton Pepper healthful outdoor activities have produced another who possesses in marked degree the qualities of mind, body and soul possessed by Roosevelt. Each of them has taken from the outdoors the best that it has to give and applied it to a higher purpose in life. In each of them the traditions of freedom and the Great Outdoors warm the blood, and the stability of common sense and rigid physical training steadies and animates the mind.

Like Roosevelt, he always has displayed the courage of his convictions—a courage instilled into the very soul of the man through his outdoor activities. In those days of hesitancy and misconception immediately prior to our entry into the World War, when advocacy of the imperiled cause of human liberty was considered by multitudes as something between fanaticism and treason, George Wharton Pepper was one of the few Americans of note to stand with Roosevelt, the dauntless leader, in his campaigns to promote preparedness. He never compromised his view that the policy of neutrality in the face of that monstrous wrong committed in the violation of Belgium was false to American tradition and duty, and when our share in winning the war finally came he served as a color sergeant.

It WAS Mr. Pepper, as attorney for organized baseball, who drafted the constitution under which it now operates. And no less emphatic and sound than the immortal Roosevelt’s instruction to athletes to “Play fair; hit the line hard!” were Mr. Pepper’s admonitions to big league ball players when he drafted their constitution. At that time he issued the following bulletin: “Play fair, play hard, play for the team—these are the inexorable requirements that America makes of the professional hall player. He gives to the American people a pledge of conformity to high standards of fair play and good sportsmanship. The club owners and officers must explicitly accept the same high standard. If any special responsibility rests upon the baseball player it is responsibility to Young America. The boy in the bleachers is in school, even if he doesn’t realize it. The heroes of the diamond are his teachers. By them his ideals of sport are powerfully affected. And the standards which he accepts in the bleachers he will carry into life. As the national game is played so the life of the nation will be lived.”

And his mind is as sound as his body. One of his most remarkable attributes is his marvelous memory. Stories are told of his wonderful feats of memory, such as quoting entire Latin stories verbatim without missing a word.

His daily itinerary includes the proper proportion of outdoor and indoor effort, of physical exercise and concentration of mind. The health and vigor of his body receives the same care and attention to detail as does the most important feature of his widespread business and professional interests. He is a man who “brings the outdoors in” and makes it serve him, and as he applies to higher endeavors that which lie has taken from the outdoors he keeps on taking of the energy and mental stimulants of the outdoors to replenish the supply. Like the wise farmer, he does not “burn out” the fertility of the soil without putting it back in greater measure.

Naturally equipped for the high role he has filled, George Wharton Pepper may have been as great in some respects even though he had not indulged so freely in the Great Outdoors—but he certainly would not have been so great in all.

A strange parallel to the story of what the outdoors has done for George Wharton Pepper is that of what outdoor activities brought into the life of George Woodruff. In addition to the coincidence that he was the coach of the team on which Pepper was a player, he later became one of the most active members of President Roosevelt’s “Tennis Cabinet,” which, as I have said. Pepper revived, and also was Attorney General for the State of Pennsylvania which Pepper served as Senator.