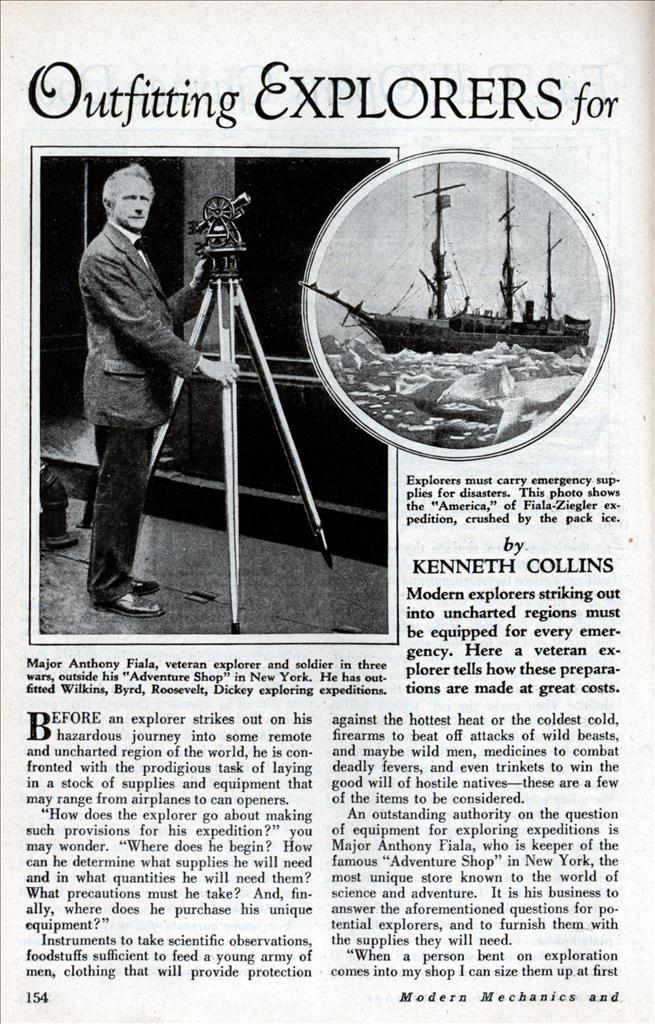 Modern explorers striking out into uncharted regions must be equipped for every emergency. Here a veteran explorer tells how these preparations are made at great costs.

BEFORE an explorer strikes out on his hazardous journey into some remote and uncharted region of the world, he is confronted with the prodigious task of laying in a stock of supplies and equipment that may range from airplanes to can openers.

“How does the explorer go about making such provisions for his expedition?” you may wonder. “Where does he begin? How can he determine what supplies he will need and in what quantities he will need them? What precautions must he take? And, finally, where does he purchase his unique equipment?”

Instruments to take scientific observations, foodstuffs sufficient to feed a young army of men, clothing that will provide protection against the hottest heat or the coldest cold, firearms to beat off attacks of wild beasts, and maybe wild men, medicines to combat deadly fevers, and even trinkets to win the good will of hostile natives—these are a few of the items to be considered.

An outstanding authority on the question of equipment for exploring expeditions is Major Anthony Fiala, who is keeper of the famous “Adventure Shop” in New York, the most unique store known to the world of science and adventure. It is his business to answer the aforementioned questions for potential explorers, and to furnish them with the supplies they will need.

“When a person bent on exploration comes into my shop I can size them up at first glance and tell whether they contemplate going on a Sunday school picnic or if they are qualified to cope with the hardships and rigors of unblazed trails in the ice or jungles,” explained Mr. Fiala.

“After my visitor has told me of the desired destination, we sit down to figure out a sort of budget plan. Under no circumstances should any one consider going far outside the limits of his native city with less than $500. Expeditions are very costly. A great many explorers die in poverty chiefly because of the high price of the explorations they undertook.

“If you want to get some idea of the high cost of living when you live in the remote worlds where explorers go, let me quote to you my latest figures for a group spending a year in Asia’s interior: “The allotment of food to this exploring party has been divided into a series of 24 cases, containing 226 food rations. Each case contains four days’ food for three men. It is costing this party SI,081 every four days, since there are six men on the expedition. You can see that the end of a year will bring their food bill up to close to $100,000.

“If you are planning a still grander and up-to-the-moment expedition and are going to take along a couple of airplanes, I can provide you with those, too. But you can see where that is going to run still higher into big money. Electrical equipment, including radio apparatus is nowadays an indispensable item. The motion picture camera, and even talkie equipment to go with it, is making adventure in the tropics and the Poles more costly.

“In laying plans for an expedition we must start with the figuring out of the food supplies. After many years of experience in sending out expeditions into every quarter of the globe, I have compiled a list of foods which compose a scientifically balanced diet. It is not only a matter of calculating the proteid content and the number of calories and vitamins, but it is also highly important that the food be palatable.

“The carrying facilities are also taken into consideration. I wouldn’t recommend that a polar expedition load up on strawberry and blackberry jam, exactly. Hardier dishes form the Arctic man’s feast. Pemmican, canned beefsteak, roast beef, sausages and salmon are the mainstays of the ice-zone explorer.

“The polar voyager also gets chocolate bars, tea and coffee. The latter two, of course, without milk or cream. The exploring world is no place for one addicted to a love for luxuries, though exploring itself is the most luxurious of sports.

“Bacon, having 1,053 calories to the pound, and ham, 832, are packed into every explorer’s outfit. The jungle explorer gets condensed milk. Like his comrade who goes into the colder belts, he has bouillon for his soup to be made on the spot, if water is available.

“As far as bread and butter are concerned, they’re completely out. Although I have had some explorers ask me to put pancake flour into their stores, and I have known them to make pancakes in the African jungle as well as on the Byrd expedition to Little America. Hardtack takes the place of bread, with 1,346 calories to 12 ounces.

“Every expedition, regardless of destination, takes a large quantity of candles. Another important item is the can-opener. I recall one traveling troupe, exploring de luxe with large quantities of canned goods, found itself far away without a single can-opener.

“The food and accessories are stored in fibre cases, which weigh one-third as much as wooden boxes, and these are packed in waterproof boxes which are stored in burlap. The reason for this secure system of packing is to prevent the natives of the jungle from stealing the contents or from the raids of wild animals.

“In the way of equipment, the explorer to distant lands first thinks of self-defense and self-preservation. This problem is solved with a supply of firearms and ammunition. Pistols and rifles fill the bill here.

“Sleep, just as in the case of every human being after a hard day’s activity, is tremendously vital to the roamer in the wilds. The sleeping-bag is the safest and most comfortable bed which the explorer knows. I have invented a number of sleeping-bags, each type suitable to the particular region being explored.

“I have equipped a number of exploring and hunting parties for North China and British Columbia with one type of sleeping-bag, and I have had another kind for mountain-climbing parties.

“The Fiala sleeping-bag which is used by explorers was invented by me back in the days of the Ziegler expedition. But my first design was of fur, and fur is too warm to use in more temperate climates.

“It is now made of pure long fibre wool, which is warm and light, equaling in warmth about 15 pounds of ordinary blankets. The bag is widest at the shoulders, tapers toward the foot and is fitted with a complete hood. Flaps are sewed on at each side and are so placed that they can be drawn across the chest and tucked over the shoulders. One inside bag is sufficient for ordinary weather, but two can be used in extreme weather.

“By way of shelter for the adventurer in the tropics I have them take along a tropical tent which is also one of my inventions. It is a ventilated tent, insect and reptile proof. This is made of so-called waterproof equatorial tent cloth with a six-inch sill and sewed-in floor of brown canvas. It has additional cheesecloth walls and front and rear entrance-ways with draw-string openings. The outside walls are of the equatorial tent cloth. When these walls are rolled up, the occupants of the tent are protected by the inner walls of cheesecloth.

“On the other hand, I have a more rigid piece of equipment for the polar venturer. It is called the Fiala parka, resembling a mackinaw with a hood. Sir Hubert Wilkins liked one I made for him so much for his trip to the South Pole that he came in one day and had me make a special parka for him to take to the North Pole regions on his submarine trip. The parka is usually made of lightweight canvas cloth or closely-woven all wool mackinaw cloth.

“Aside from the equipment I have already mentioned, and I might say that one item is just as important as the other and just as indispensable, I am often called upon to supply sledges and dogs. Even ships. Of course wooden ships are far superior in go- ing to the icelands because of their flexibility when caught fast in the ice.

“Commander Byrd’s vessel, you will recall, was of wood for that very reason. As most of the equipment which Byrd carried on his last expedition was contributed by persons financially established to do so, I did not play such a great part in aiding him in the preliminary preparations, I am sorry to say. However, I did fit him and his men out with snow goggles, special Arctic clothing and a number of scientific instruments.”

Previously, Major Fiala had outfitted Dr. Herbert S. Dickey and his wife in their expedition to the Orinoco River in South America, where they had gone in search of a specie of white Indian. Young Theodore Roosevelt and Kermit Roosevelt were outfitted by Major Fiala in their Asiatic jaunt. Commander Dyot also availed himself of Major Fiala’s adventure-system in his Brazilian exploits. Few famous explorers and hunters have escaped the Fiala influence.

With the exception of the use of the radio, polar exploring varies very little today from the time when Major Fiala’s generation of adventurers penetrated to the poles.

Major Fiala has gained his knowledge of the exploration business in the hard school of experience. When he speaks, explorers about to set out for the ends of the earth listen attentively. They know the profundity of the man’s advice. They know that Major Fiala is the specialist of the world of adventure. They recall how Fiala, descended from a famous Scandinavian line of explorers and adventurers, had been the commander of the Fiala-Ziegler Expedition of 1930-05.

Before that the proprietor of “Adventure Shop” had spent two years in the Arctic wastes on another expedition. He was an authority on polar explorations. He served in the Spanish-American war with distinction. He was a close companion of Theodore Roosevelt on his historic River of Doubt expedition.

What’s more, Fiala served on the Mexican border in 1916 and was an officer in the ordnance department during the World war. Withal, he was an explorer, scientist, engineer, inventor and a conjurer in the mystic realm of thrilling adventures.