Modern Mechanix
Issue: May, 1936
Posted in: Crime and Police
Tags: guns
2 Comments on Outshooting the Guns of Gangland (May, 1936)

Outshooting the Guns of Gangland (May, 1936) 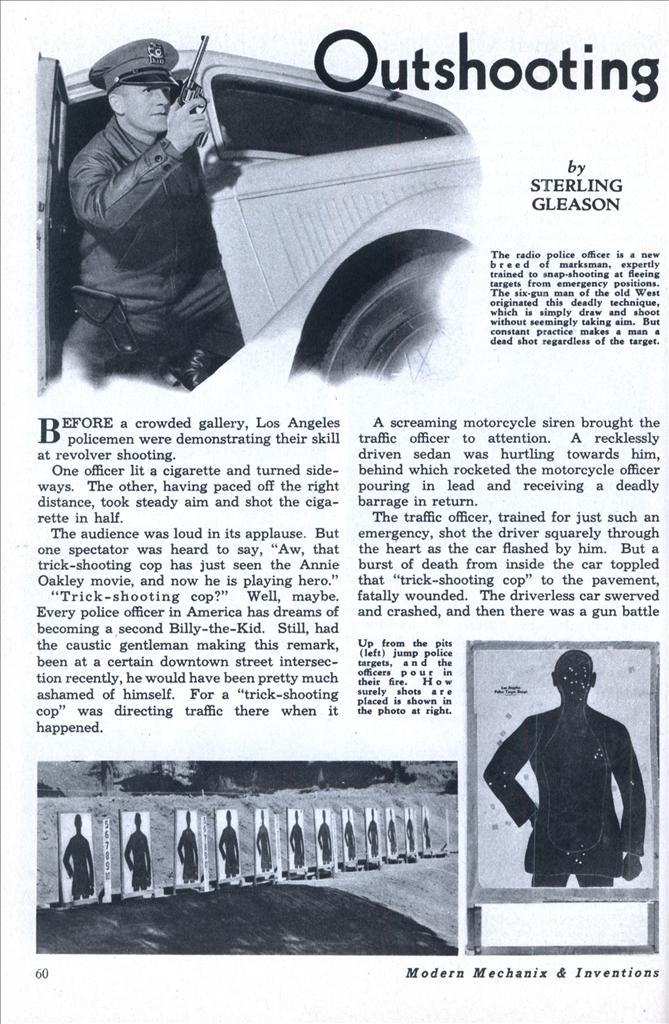 Outshooting the Guns of Gangland

The radio police officer is a new breed of marksman, expertly trained to snapshooting at fleeing targets from emergency positions. The six-gun man of the old West originated this deadly technique, which is simply draw and shoot without seemingly taking aim. But constant practice makes a man a dead shot regardless of the target.

BEFORE a crowded gallery, Los Angeles policemen were demonstrating their skill at revolver shooting.

One officer lit a cigarette and turned sideways. The other, having paced off the right distance, took steady aim and shot the cigarette in half.

The audience was loud in its applause. But one spectator was heard to say, “Aw, that trick-shooting cop has just seen the Annie Oakley movie, and now he is playing hero.”

“Trick-shooting cop?” Well, maybe. Every police officer in America has dreams of becoming a second Billy-the-Kid. Still, had the caustic gentleman making this remark, been at a certain downtown street intersection recently, he would have been pretty much ashamed of himself. For a “trick-shooting cop” was directing traffic there when it happened.

A screaming motorcycle siren brought the traffic officer to attention. A recklessly driven sedan was hurtling towards him, behind which rocketed the motorcycle officer pouring in lead and receiving a deadly barrage in return.

The traffic officer, trained for just such an emergency, shot the driver squarely through the heart as the car flashed by him. But a burst of death from inside the car toppled that “trick-shooting cop” to the pavement, fatally wounded. The driverless car swerved and crashed, and then there was a gun battleroyal, for police appeared out of thin air. In the car was found the loot from a bank robbery committed only a few moments before.

Back of the brilliant shooting which dazzles spectators at police ranges, lies long, steady practice and training which is making police marksmanship feared by the underworld as never before. A modern police department today is really a miniature army, complete from its arsenals, bristling with sub-machine guns, riot guns, high-powered rifles, and side-arms, to grenades and guns which lay down a barrage of gas. There are armored cars with bullet-proof windows, and shielded tires, forming veritable tanks for street warfare; armored motorcycles with machine guns or automatic pistols, mounted between handlebars.

Most important of all, however, is a well-trained line of sharp-shooting officers. In certain cities of the United States, a system of training is fast making every man a crack shot, and as a result, police guns are speaking with new authority.

Every month, each man on the Los Angeles force, from the Chief on down, must go to the pistol range to demonstrate his skill with the revolver. On the firing line he finds a dozen or more other officers, also anxious to qualify. In the sunken pits just below the earthen backstops, trusties are waiting, ready to aid by manipulating the targets and recording the hits.

Speaking into a microphone, a rangemaster directs the fire. At his command, targets jump up from the trench.

A dozen pistols speak at once. Holes appear in the paper-covered targets.

Now, from the pits, bamboo pointers dart upward. Pointing first to each hit, then to a numbered post beside the target, the stickindicates how each man has scored. A bull’s-eye counts ten; the outer rings, from nine to five each. An officer must score an average of two hundred points from the forty qualifying shots to earn his “shooting money.”

Up from the pits jumps a new set of targets. They are silhouettesâ€”life-size drawings of phantom criminals, with the vital areas outlined in white. The marksmen make five heart shots, then five head shots; next, five disabling shotsâ€”three in” one arm, two in the other; and finally, five abdominal shots. Sergeant Joe Dirks unconcernedly asks Officer Naoka to poke a few holes in the target, near the heart, and the officer obliges by placing a circle of tiny perforations in the very center of the heart outline, although he is shooting with a strange .38 revolver at a range of twenty-five yards.

Steady practice has had its result, for the police pistol team has won every state, national, and international shoot in which they have competed in the last five years. Their sharpshooting has been largely instrumental in throwing a wholesome fear of police guns into the underworld. Largely on this account, crime records in Los Angeles for last year showed a reduction of 38% in the number of robberies, 28% in burglaries.