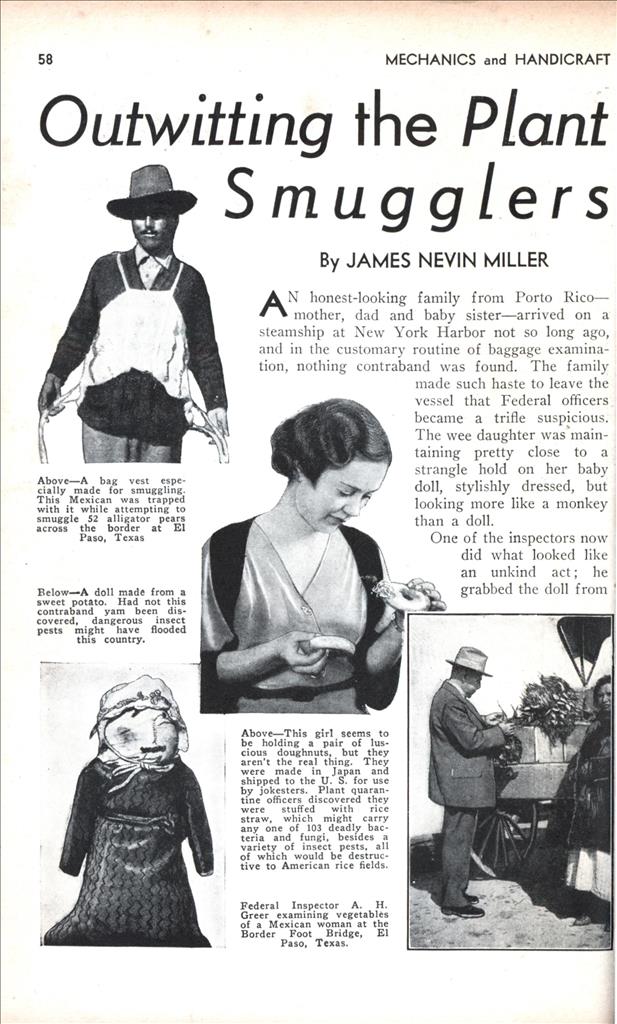 Sometimes the smuggling of plants is innocently intended—the “law breakers” never giving a thought to the dangerous pests they might bring into the country with the fruit, plants or vegetables. On the other hand, some plant smuggling is done because of the money such contraband brings.

AN honest-looking family from Porto Rico— mother, dad and baby sister—arrived on a steamship at New York Harbor not so long ago, and in the customary routine of baggage examination, nothing contraband was found. The family made such haste to leave the vessel that Federal officers became a trifle suspicious. The wee daughter was maintaining pretty close to a strangle hold on her baby doll, stylishly dressed, but looking more like a monkey than a doll.

One of the inspectors now did what looked like an unkind act; he grabbed the doll from the little girl and proceeded to undress it. Shame, you say? Maybe so. But imagine his surprise when he discovered that it wasn’t a doll, but a certain kind of contraband sweet potato or yam, native to Porto Rico. The object of Uncle Sam’s prohibition is the fear that destructive insects might accompany such food delicacies.

All of which goes to show to what lengths well -meaning folks go to smuggle things into this country. The incident is only one of many thousands encountered by inspectors of the Bureau of Entomology and Plant Quarantine. Their job is to prevent plant and fruit smuggling, innocently intended, or otherwise; and their per- sonnel, while comparatively small, is of the highest caliber. Inspectors are stationed at all principal ports. Single packages have been known to contain enough insect pests to destroy an entire American crop. Recently, a well-meaning Mississippi farmer came close to sneaking in a parcel containing 59 separate sets of cotton seed— every set infested with living larvae of the dread pink boll-worm, the most destructive enemy of cotton in the world!

Federal authorities say that, if this farmer’s personal parcel had not been intercepted through the vigilance of a plant inspector, then it might have carried to the heart of Missis- sippi enough living pink bollworms to infest the entire state—an invasion which might easily have gotten beyond control before proper protective steps could be taken.

Insect enemies often slip into this country in odd ways. But who would think of looking for such immigrants in an oil painting? Yet, certain European pests, recently encountered, had apparently developed a marked taste for art; at least, they were busy tunneling in the block of wood on which an ancient masterpiece was painted, when they were discovered by an alert customs inspector at the Washington, D. C., postoffice.

The venerable painting, with its mischievous insect colony, was promptly turned over to the Plant Inspection House, Department of Agriculture, given effective fumigation treatment, and sent on its way, freed from the burrowing family. Federal entomologists say the insect connoisseur of art was a member of the white ant, or termite, family, differing somewhat from those common in this country.

Concealment of illicit plant and food material in parcels of miscellaneous household articles is frequently detected by the Federal sleuths. Apples have been found crowded into the toes of slippers, and pomegranates have been taken from the center of an innocent-looking bag of feathers. Occasionally, a flower bulb will be found included with an assortment of trivial presents.

But here’s one of the cleverest ruses of them all! Not long ago, a huge package was examined by Washington postal inspectors. At first glance, it consisted of a number of very heavy magazines; their weight was so out of proportion to their size that the inspector opened the “magazines” and found many bunches of contraband nursery stock. Each dummy magazine had been devised with utmost care; a few plants were loosely rolled into a magazine and plugs cut from a tightly-rolled magazine of similar appearance were inserted in the open ends of the roll. A wrapper pasted around the completed package gave it the appearance of an actual periodical legitimately prepared for mailing.

There is a well-known tradition that, if you walk round and round an owl, he will twist his head off in the effort to keep always facing you. Baggage inspectors along our borders sometimes take advantage of this same mental quirk in human nature. If it is suspected that the passenger is concealing something in his pockets, the inspector walks behind him; if he has something hidden on his person, he usually turns and keeps the inspector always in front of him; otherwise, he remains interested in the baggage. A simple stunt, but it works.

How would one determine whether or not household goods in a closed barrel were packed in straw, assuming straw to be a forbidden importation. Break open the barrel? That is pretty crude compared with the method used by L. E. Bozarth, state inspector and Federal collaborator at Portland, Oregon. With a screwdriver, he pries the staves apart to make a crack and then, with his nose to this opening, whacks the barrel smartly with any handy object. A couple of ex- pert sniffs tell him at once whether there is straw, paper or excelsior inside by its characteristic odor.

An April Fool joke might have serious results. Let’s suppose you are very hungry on the morning of April first and kind landlady offers you, along with a steaming cup of Java, a couple of luscious-looking doughnuts, generously sprinkled with powdered sugar. Wouldn’t you be surprised when, having sunk your molars into one of the “doughnuts” you discovered it was a “phony”—made of cotton ?

The sad truth is that such imitation baked goods might be a potential menace to American plant life. Quite a number of them have been discovered by alert Federal investigators in recent years. Usually they are made in the Orient. The danger is in the rice straw they contain—ordinarily as a covering—stuffed with cotton and realistically colored; it might introduce into this country any one of 90 new fungi and bacteria, and any one of an imposing array of insect pests that have not yet established themselves in North America.

Very recently an inspector at Baltimore, while examining bananas from Guatemala, found in a bunch a young snake, a little over two feet long, which somewhat resembled the dreaded water moccasin. Certainly it caused consternation among the colored boys who were handling the fruit; the inspector killed the snake and Smithsonian scientists said it was a baby boa constrictor.

Bananas have been carriers of such creatures as lizards, crabs, frogs, scorpions, tarantulas, lizards and even a flying fox. This motley array of strange, interesting and sometimes dangerous surplus material has been turned over to specialists at the National Museum or elsewhere for study and preservation.

In Brownsville, Texas, a few months ago, a bus full of passengers stopped at the customs station. The plant quarantine officer boarded the bus, while the customs agent checked the passengers through the open windows. Neither noticed anything of a contraband nature but, when they met at one end of the bus, the customs agent complained that he smelled oranges, and suggested that they have all passengers get out of the bus. The last person to rise, a plump Mexican lady wearing a voluminous skirt, let fall a sack containing two oranges from the folds of her dress. The anti-climax of this story is that one of the oranges contained seven living larvae of an extremely devastating fruit fly.