Modern Mechanix
Issue: Apr, 1931
Posted in: Crime and Police, Sign of the Times
2 Comments on Outwitting the Plant Smugglers (Apr, 1931) 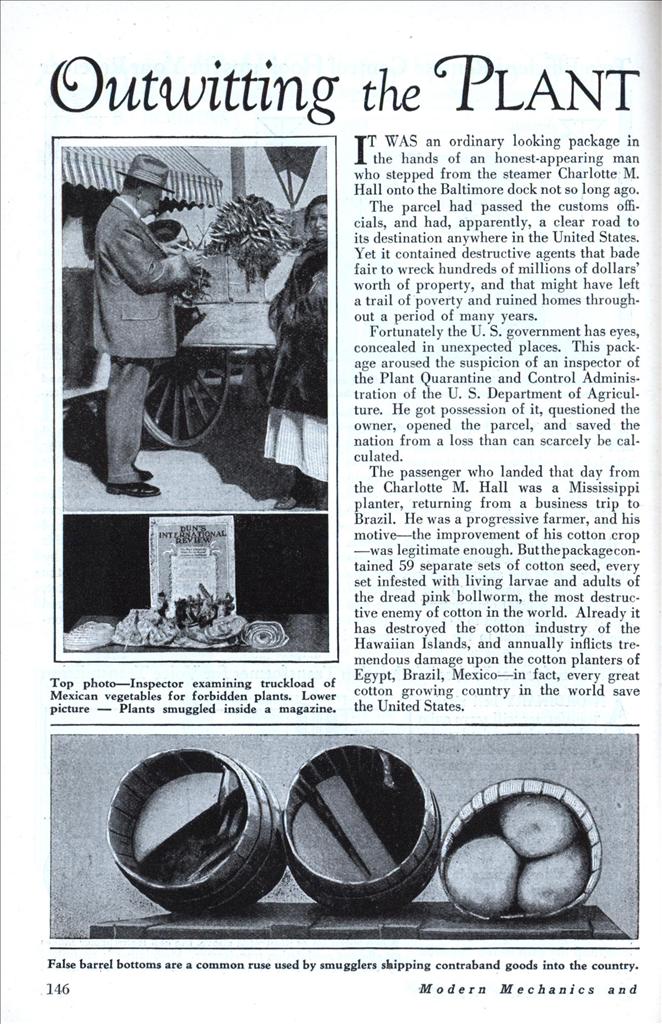 IT WAS an ordinary looking package in the hands of an honest-appearing man who stepped from the steamer Charlotte M. Hall onto the Baltimore dock not so long ago.

The parcel had passed the customs officials, and had, apparently, a clear road to its destination anywhere in the United States. Yet it contained destructive agents that bade fair to wreck hundreds of millions of dollars’ worth of property, and that might have left a trail of poverty and ruined homes throughout a period of many years.

Fortunately the U. S. government has eyes, concealed in unexpected places. This package aroused the suspicion of an inspector of the Plant Quarantine and Control Administration of the U. S. Department of Agriculture. He got possession of it, questioned the owner, opened the parcel, and saved the nation from a loss than can scarcely be calculated.

The passenger who landed that day from the Charlotte M. Hall was a Mississippi planter, returning from a business trip to Brazil. He was a progressive farmer, and his motive—the improvement of his cotton crop —was legitimate enough. But the package contained 59 separate sets of cotton seed, every set infested with living larvae and adults of the dread pink bollworm, the most destructive enemy of cotton in the world. Already it has destroyed the cotton industry of the Hawaiian Islands, and annually inflicts tremendous damage upon the cotton planters of Egypt, Brazil, Mexico—in fact, every great cotton growing country in the world save the United States.

Experts say that if this innocent appearing personal package had not been intercepted through the vigilance of a plant inspector, it would have carried to the heart of Mississippi enough living pink bollworms to have started an invasion of the entire state which might easily have gotten beyond control before discovery.

This incident is only one of the many thousands involving similar interceptions made annually by the inspectors of the Plant Quarantine and Control Board. Their job is to prevent plant and fruit smuggling, innocently intended, or otherwise; and their personnel, while comparatively small numerically speaking, is of the highest caliber. Inspectors are stationed at all principal ports.

Down along the Mexican border the Federal officers have their share and more of adventures, humorous and dangerous. Even some of the old-timers hardly dare put their hands in their pockets while working in certain hard-boiled communities, for fear of being shot at from behind. The license tags of their trucks carry the letters, U. S. D. A., meaning of course, United States Department of Agriculture. But thirsty souls, and there are many along the border, are prone to take a different interpretation—United States Dry-Agent! And lovers of the corn and rye like to take the law in their hands—when in doubt.

And now for some of the tricks of the smugglers! The following side splitting incident took place at the port of New York a few years ago. It seems that a woman arrived from Jamaica, and in her possession was dis- covered a basket containing some plants. They did not meet the current rigid requirements so a plant inspector explained that her plants could not be brought in. The good woman explained that she really wasn’t greatly interested in the plants themselves, but that she was anxious to have the soil for her prize cat to play in—he did so love to frolic about in Jamaica soil.

A tear or so appeared in the official’s eye— for he was a kindly soul. However, it did not remain there long. After being hard-hearted enough to do his duty and advise the dowager that she must return home sans the soil, he gave it the thorough Sherlock Holmes. Hardly had the good woman departed when his astonished, but no longer humanitarian eye, noted two bottles of Jamaica gin buried therein.

Joseph of Biblical fame had a coat of many colors. But the inspectors around Brownsville, Texas, and the notorious Tia Juana district, are still chuckling over the Mexican of many pockets. Some years ago this man came waddling across the border at such a slow rate that he aroused suspicion. To begin with, he was plump, but his avoirdupois seemed to be not altogether of the flesh. And it was not, as examination of his portly person revealed. Inside his coat was an ingeniously devised vest containing many pockets filled with alligator pears. Now, these delicacies are likely to contain an unwanted kind of pest. This “inventor” extraordinary was tried, found guilty, and given a stiff fine for his ambitious efforts to pull a fast one on your Uncle Samuel.

A somewhat similar incident, but of a far more serious nature, took place on the border near El Paso recently. A very dignified gentleman of middle age who claimed to be some sort of a scientist presented his trunk for Federal inspection. Nothing contraband seemed to be on hand until one of the inspectors nonchalantly plunged a hand into a bulky looking pile of the man’s coats and trousers. Encountering numerous hard objects, the inspector made a thorough investigation and found no less than 56 contraband orchid plants. That the offender’s intentions were anything but innocent was revealed by the fact that every one of the plants had been sewed painstakingly into the garments with an obvious intent to deceive. Imagine Mr. Scientist’s embarrassment when he saw his well worked plans go awry, even to the point of earning a substantial fine.

Then there was the case of the American woman who crossed the Mexican border into the United States wearing an extremely full skirt of a type common to certain well known religious sects. Devout looking was this lady, yet there was a certain something about her . demeanor that aroused suspicion, so a lady inspector was instructed to give her a thorough inspection. This brought out the interesting fact that the good woman had tied a huge bag, filled with contraband fruit, around her waist. Which may explain why she chose such full skirts on that eventful day.

But for sheer ingenuity, consider a package lately received by postal inspectors. At first glance it consisted of a number of heavy magazines. But their weight was so out of proportion to their size that the inspector opened the “magazines”. Whereupon he found many bunches of contraband nursery stock, alongside of which a couple of potatoes had been packed in order to afford moisture to the stock.

Other clever ruses of the smugglers are: false bottomed trunks and barrels, besides contraband fruits and plants which have been hidden in partially baked loaves of bread.