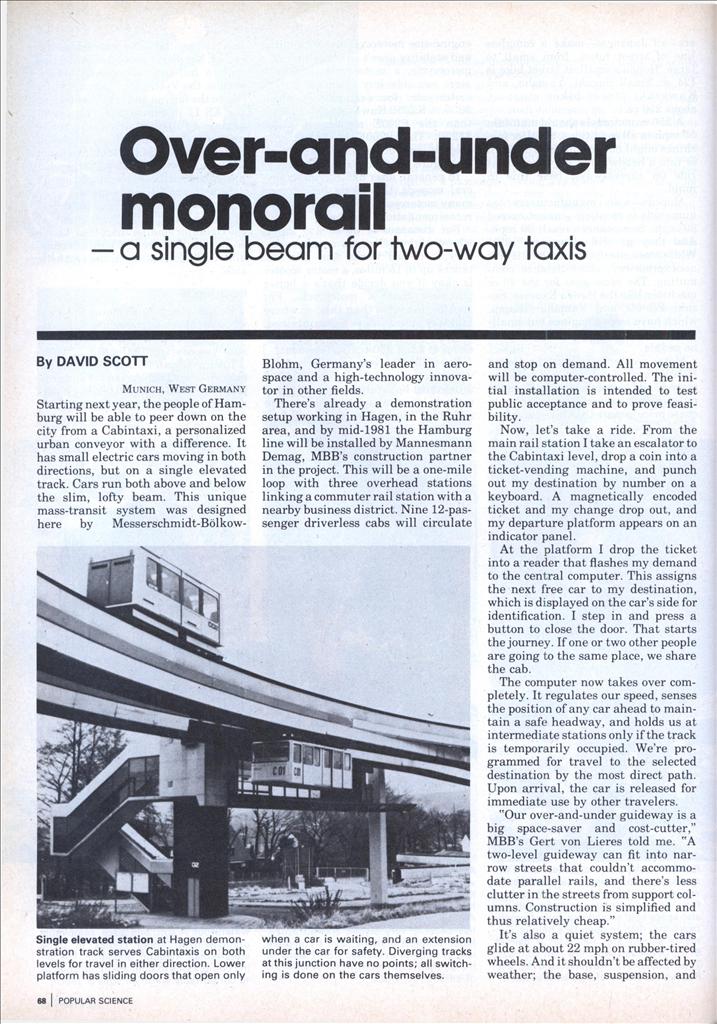 Munich, West Germany Starting next year, the people of Hamburg will be able to peer down on the city from a Cabintaxi, a personalized urban conveyor with a difference. It has small electric cars moving in both directions, but on a single elevated track. Cars run both above and below the slim, lofty beam. This unique mass-transit system was designed here by Messerschmidt-Bolkow-Blohm, Germany’s leader in aerospace and a high-technology innovator in other fields.

There’s already a demonstration setup working in Hagen, in the Ruhr area, and by mid-1981 the Hamburg line will be installed by Mannesmann Demag, MBB’s construction partner in the project. This will be a one-mile loop with three overhead stations linking a commuter rail station with a nearby business district. Nine 12-passenger driverless cabs will circulate and stop on demand. All movement will be computer-controlled. The initial installation is intended to test public acceptance and to prove feasibility.

Now, let’s take a ride. From the main rail station I take an escalator to the Cabintaxi level, drop a coin into a ticket-vending machine, and punch out my destination by number on a keyboard. A magnetically encoded ticket and my change drop out, and my departure platform appears on an indicator panel.

At the platform I drop the ticket into a reader that flashes my demand to the central computer. This assigns the next free car to my destination, which is displayed on the car’s side for identification. I step in and press a button to close the door. That starts the journey. If one or two other people are going to the same place, we share the cab.

The computer now takes over completely. It regulates our speed, senses the position of any car ahead to maintain a safe headway, and holds us at intermediate stations only if the track is temporarily occupied. We’re programmed for travel to the selected destination by the most direct path. Upon arrival, the car is released for immediate use by other travelers.

“Our over-and-under guideway is a big space-saver and cost-cutter,” MBB’s Gert von Lieres told me. “A two-level guideway can fit into narrow streets that couldn’t accommodate parallel rails, and there’s less clutter in the streets from support columns. Construction is simplified and thus relatively cheap.”

It’s also a quiet system; the cars glide at about 22 mph on rubber-tired wheels. And it shouldn’t be affected by weather; the base, suspension, and guidance tracks are fully enclosed within the beam. “This protects them from snow and ice,” von Lieres said, “while the lateral rollers eliminate any risk of derailment. They allow tight corners—a turn radius as small as 100 feet—meaning greater versatility in urban routing.”

Electric drive is from individual onboard linear-induction motors (see “Flying Trains,” PS, Aug. ’79). Power and flat reaction rails at both levels are completely shielded, so there are no weather or safety problems. Since traction does not depend on wheel-to-track friction, gradients up to 10 percent can be handled at full speed. The no-contact motors are also used for skid-free braking, supplemented by mechanical wheel brakes for parking and emergencies.

Switching at track junctions is done on the cars themselves by swiveling guide rollers, and is computer-auto-mated. There are no moving points on the guideway needing regular maintenance or heating in winter. Cabin-taxis move slowly but surely. MBB figures average travel times will be 50 percent shorter than by private car or other street vehicle in city traffic.

Tiny three-seat cabins only 12 feet long are planned for flexibility and economy on lines where traffic varies widely between peak hours and slack periods. These might be used on an extended 20-mile, 38-station network now envisaged for Hamburg.

The individual monorail cars could do a lot to speed people and reduce road congestion in cities. They could be on call around the clock. The scheme is heavily funded by the German Federal Ministry of Research and Technology—which makes its chance of success pretty good.