Ninety seven years later and you’d be hard pressed to find a hundred electric cars in all of NYC.

Incidentally the $45 a month price would be equivalent to $1022 a month in 2012 dollars. While that sounds like a lot of money I’m sure you could find valet lots around central park that actually cost that much today. 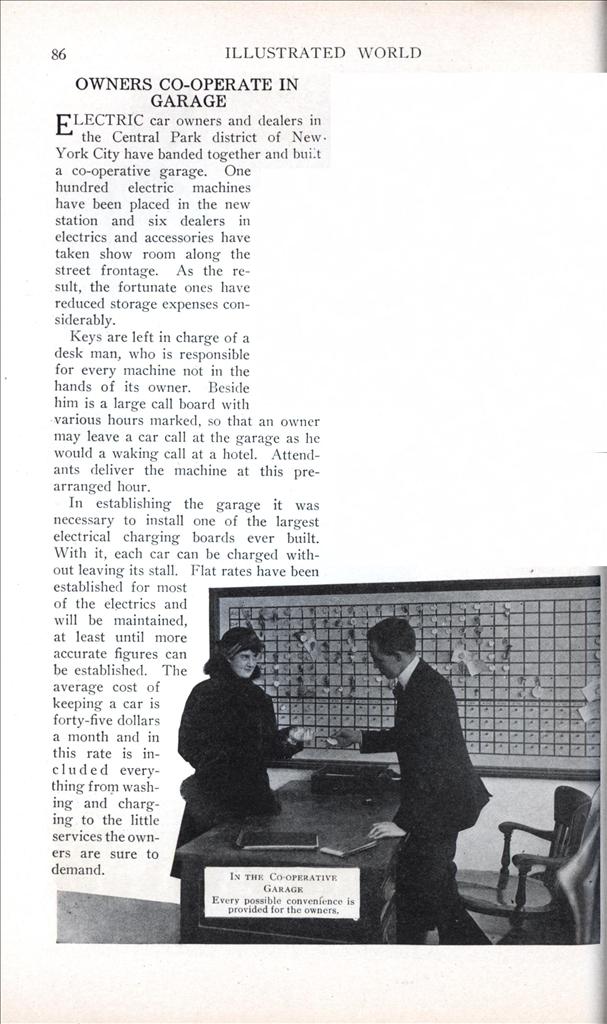 ELECTRIC car owners and dealers in the Central Park district of New-York City have banded together and built a co-operative garage. One hundred electric machines have been placed in the new station and six dealers in electrics and accessories have taken show room along the street frontage. As the result, the fortunate ones have reduced storage expenses considerably.

Keys are left in charge of a desk man, who is responsible for every machine not in the hands of its owner. Beside him is a large call board with various hours marked, so that an owner may leave a car call at the garage as he would a waking call at a hotel. Attendants deliver the machine at this prearranged hour.

In establishing the garage it was necessary to install one of the largest electrical charging boards ever built. With it, each car can be charged without leaving its stall. Flat rates have been established for most of the electrics and will be maintained, at least until more accurate figures can be established. The average cost of keeping a car is forty-five dollars a month and in this rate is included everything from washing and charging to the little services the owners are sure to demand.