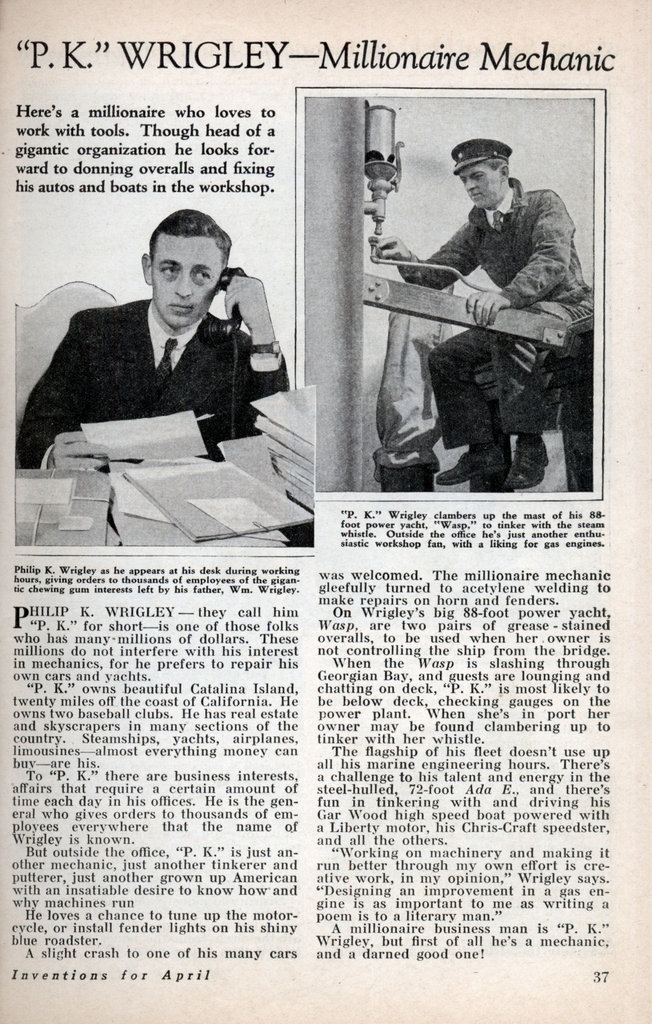 “P. K.” WRIGLEY – Millionaire Mechanic
Here’s a millionaire who loves to work with tools. Though head of a gigantic organization he looks forward to donning overalls and fixing his autos and boats in the workshop.

PHILIP K. WRIGLEY — they call him “P. K.” for short—is one of those folks who has many-millions of dollars. These millions do not interfere with his interest in mechanics, for he prefers to repair his own cars and yachts.

“P. K.” owns beautiful Catalina Island, twenty miles off the coast of California. He owns two baseball clubs. He has real estate and skyscrapers in many sections of the country. Steamships, yachts, airplanes, limousines—almost everything money can buy—are his.

To “P. K.” there are business interests, affairs that require a certain amount of time each day in his offices. He is the general who gives orders to thousands of employees everywhere that the name of Wrigley is known.

But outside the office, “P. K.” is just another mechanic, just another tinkerer and putterer, just another grown up American with an insatiable desire to know how and why machines run.

He loves a chance to tune up the motorcycle, or install fender lights on his shiny blue roadster.

A slight crash to one of his many cars was welcomed. The millionaire mechanic gleefully turned to acetylene welding to make repairs on horn and fenders.

On Wrigley’s big 88-foot power yacht, Wasp, are two pairs of grease – stained overalls, to be used when her owner is not controlling the ship from the bridge.

When the Wasp is slashing through Georgian Bay, and guests are lounging and chatting on deck, “P. K.” is most likely to be below deck, checking gauges on the power plant. When she’s in port her owner may be found clambering up to tinker with her whistle.

The flagship of his fleet doesn’t use up all his marine engineering hours. There’s a challenge to his talent and energy in the steel-hulled, 72-foot Ada E., and there’s fun in tinkering with and driving his Gar Wood high speed boat powered with a Liberty motor, his Chris-Craft speedster, and all the others.

“Working on machinery and making it run better through my own effort is creative work, in my opinion,” Wrigley says. “Designing an improvement in a gas engine is as important to me as writing a poem is to a literary man.”

A millionaire business man is “P. K.” Wrigley, but first of all he’s a mechanic, and a darned good one!