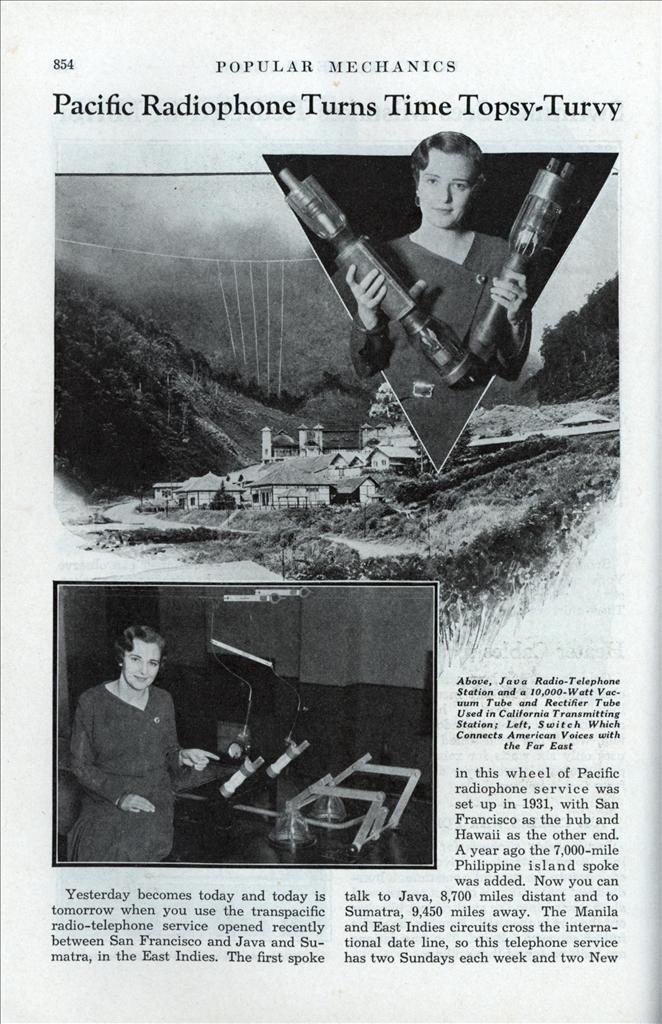 Yesterday becomes today and today is tomorrow when you use the transpacific radio-telephone service opened recently between San Francisco and Java and Sumatra, in the East Indies. The first spoke in this wheel of Pacific radiophone service was set up in 1931, with San Francisco as the hub and Hawaii as the other end. A year ago the 7,000-mile Philippine island spoke was added. Now you can talk to Java, 8,700 miles distant and to Sumatra, 9,450 miles away. The Manila and East Indies circuits cross the international date line, so this telephone service has two Sundays each week and two New Year’s days in each year. A Javan calling a San Franciscan on Monday morning is likely to find the American just home from Sunday church services, but the American who puts in a call for Java on Tuesday hears the news from that country which has occurred on Wednesday. At Dixon, Calif., a ninety-foot “diamond” antenna transmits the electric-voice waves to a “pine-tree” antenna near Bandung and a Bandung antenna of the pine-tree type transmits to a diamond antenna at Point Reyes, Calif. The Dixon transmission spreads like a funnel to cover both Java and Manila and also can serve Japan when service opens later. To reach Sumatra, a second radio-telephone link is connected at Bandung’ to the transpacific channel. Calls to Java have been made since 1931 over a roundabout circuit eastward, half way around the world, 14,500 miles long from San Francisco to New York to London to Amsterdam to Bandung, San Francisco and Pacific coast towns are connected with the Dixon and Point Reyes stations by long-distance telephone lines.