Modern Mechanix
Issue: May, 1936
Posted in: Motorcycles
1 Comment on Packing Thrills in a Motorcycle T.T. Track (May, 1936) 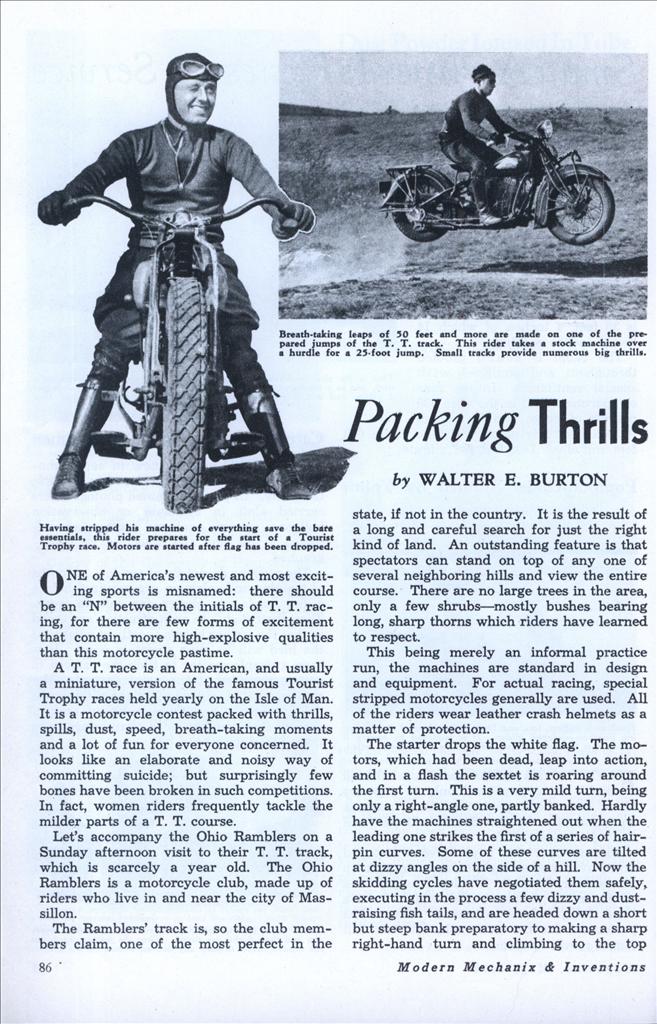 ONE of America’s newest and most exciting sports is misnamed: there should be an “N” between the initials of T. T. racing, for there are few forms of excitement that contain more high-explosive qualities than this motorcycle pastime.

A T. T. race is an American, and usually a miniature, version of the famous Tourist Trophy races held yearly on the Isle of Man. It is a motorcycle contest packed with thrills, spills, dust, speed, breath-taking moments and a lot of fun for everyone concerned. It looks like an elaborate and noisy way of committing suicide; but surprisingly few bones have been broken in such competitions. In fact, women riders frequently tackle the milder parts of a T. T. course.

Let’s accompany the Ohio Ramblers on a Sunday afternoon visit to their T. T. track, which is scarcely a year old. The Ohio Ramblers is a motorcycle club, made up of riders who live in and near the city of Mas-sillon.

The Ramblers’ track is, so the club members claim, one of the most perfect in the state, if not in the country. It is the result of a long and careful search for just the right kind of land. An outstanding feature is that spectators can stand on top of any one of several neighboring hills and view the entire course. There are no large trees in the area, only a few shrubsâ€”mostly bushes bearing long, sharp thorns which riders have learned to respect.

This being merely an informal practice run, the machines are standard in design and equipment. For actual racing, special stripped motorcycles generally are used. All of the riders wear leather crash helmets as a matter of protection.

The starter drops the white flag. The motors, which had been dead, leap into action^ and in a flash the sextet is roaring around the first turn. This is a very mild turn, being only a right-angle one, partly banked. Hardly have the machines straightened out when the leading one strikes the first of a series of hairpin curves. Some of these curves are tilted at dizzy angles on the side of a hill. Now the skidding cycles have negotiated them safely, executing in the process a few dizzy and dust-raising fish tails, and are headed down a short but steep bank preparatory to making a sharp right-hand turn and climbing to the top of the steepest and tallest hill on the course.

When the dust clears away, a rider is seen struggling to his feet. His machine is lying on its side a yard away.

The five remaining machines, after engaging in a short but lively hill-climbing contest, have reached the high point of the course, and have idled down for the next test. This is a descent of a rocky, loose-dirt hillside that would make a mule pause and consider. But the motorcycle roughriders do not hesitate. Down the hill they slide, and skid around the sharp turn at the bottom, showering the surrounding bushes and a few venturesome spectators with dirt. There are two sprawling flops on this bottom turn, but the riders are up in an instant and on their way.

Then come a series of up-and-down waves scrambled with a few more hairpin turns, and the motorcycles are on the home stretch. There remains one more formidable obstacle.

The track has been dug away to produce a sudden rise of perhaps two feet, over which a rider has to leap in order to complete the run. Because stock machines are being used the cyclist hop this miniature cliff with considerable caution, flying through the air perhaps only 10 or 15 feet. However, in actual competitions, when stripped machines are being used, riders sometimes make broad jumps of 60 feet, and clear the ground by 4 or 5 feet.

And that, in brief, is what a run over a T. T. course is like. For the most part, the machines travel in low gear, although on some of the more gentle parts of the track, shifts into higher gears can be made.

The track is so designed that various routes can be taken for these spins, to provide practice in negotiating sharp curves, climbing steep hills, making leaps and doing other tricks.

An approved T. T. course is as irregular as its designers can make it, and includes both right and left hand turns, and, if possible, a hill that will necessitate gear changing.

All starts are made with dead motors. The starting positions of contestants are determined either by qualifying trials or by drawing, whichever the promoter of the race specifies. The approved AMA system of flagging is used for controlling the race.

Although a typical Tourist Trophy race seems, especially to the spectator who is not familiar with motorcycle pranks and feats, to be an extremely risky, rough-and-tumble affair, there are some hazards that are barred. For instance, although the course can include such obstacles as ploughed ground, hairpin turns and steep hills, there must be no streams, ponds or other water hazards to negotiate. The presence of a mud bog or water splash would make the event, in the eyes of motorcycle race authorities, a Cross Country instead of a Tourist Trophy contest.