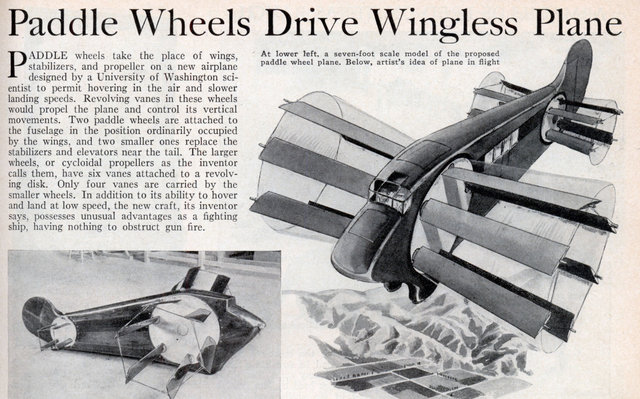 PADDLE wheels take the place of wings, stabilizers, and propeller on a new airplane designed by a University of Washington scientist to permit hovering in the air and slower landing speeds. Revolving vanes in these wheels would propel the plane and control its vertical movements. Two paddle wheels are attached to the fuselage in the position ordinarily occupied by the wings, and two smaller ones replace the stabilizers and elevators near the tail. The larger wheels, or cycloidal propellers as the inventor calls them, have six vanes attached to a revolving disk. Only four vanes are carried by the smaller wheels. In addition to its ability to hover and land at low speed, the new craft, its inventor says, possesses unusual advantages as a fighting ship, having nothing to obstruct gun fire.