And it only weighs 7lbs! 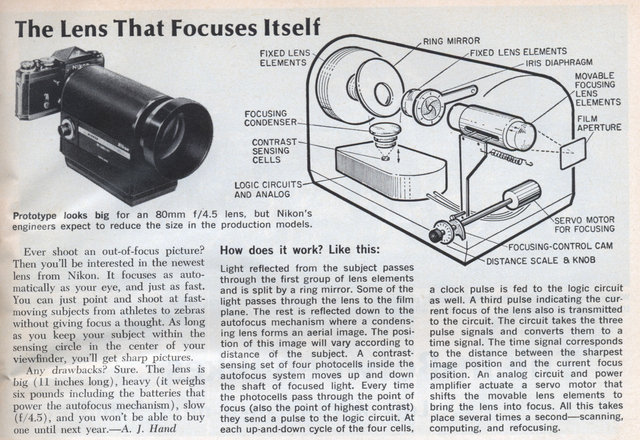 The Lens That Focuses Itself
Ever shoot an out-of-focus picture? Then you’ll be interested in the newest lens from Nikon. It focuses as automatically as your eye, and just as fast. You can just point and shoot at fast-moving subjects from athletes to zebras without giving focus a thought. As long as you keep your subject within the sensing circle in the center of your viewfinder, you’ll get sharp pictures. Any drawbacks? Sure. The lens is k big (11 inches long), heavy (it weighs six pounds including the batteries that power the autofocus mechanism), slow (f/4.5), and you won’t be able to buy one until next year.â€”A. J Hand

Light reflected from the subject passes through the first group of lens elements and is split by a ring mirror. Some of the light passes through the lens to the film plane. The rest is reflected down to the autofocus mechanism where a condensing lens forms an aerial image. The position of this image will vary according to distance of the subject. A contrast-sensing set of four photocells inside the autofocus system moves up and down the shaft of focused light. Every time the photocells pass through the point of focus (also the point of highest contrast) they send a pulse to the logic circuit. At each up-and-down cycle of the four cells, a clock pulse is fed to the logic circuit as well. A third pulse indicating the current focus of the lens also is transmitted to the circuit. The circuit takes the three pulse signals and converts them to a time signal. The time signal corresponds to the distance between the sharpest image position and the current focus position. An analog circuit and power amplifier actuate a servo motor that shifts the movable lens elements to bring the lens into focus. All this takes place several times a secondâ€”scanning, computing, and refocusing.

Yes, if you become a computer programmer chicks will dig you. Learn to say the words every woman loves to hear: “Do not fold, spindle or mutilate” 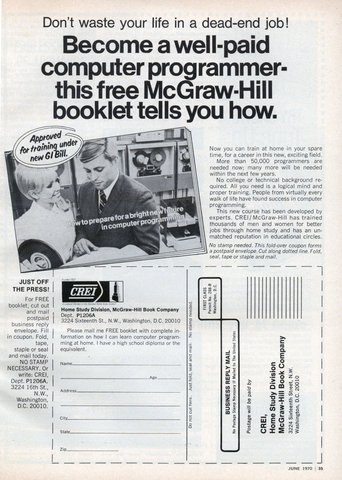 Don’t waste your life in a dead-end job!

Become a well-paid computer programmer – this free McGraw-Hill booklet tells you how.

Now you can train at home in your spare time, for a career in this new, exciting field.
More than 50,000 programmers are needed now; many more will be needed within the next few years.
No college or technical background required. All you need is a logical mind and proper training. People from virtually every walk of life have found success in computer programming.
This new course has been developed by experts. CREI/McGraw-Hill has trained thousands of men and women for better jobs through home study and has an unmatched reputation in educational circles.
No stamp needed. This fold-over coupon forms i a postpaid envelope. Cut along dotted line. Fold, seal, tape or staple and mail. 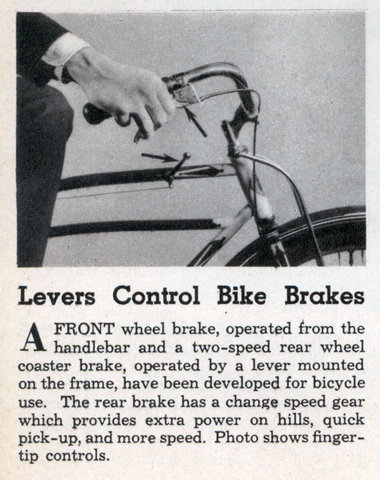 Levers Control Bike Brakes
A FRONT wheel brake, operated from the handlebar and a two-speed rear wheel coaster brake, operated by a lever mounted on the frame, have been developed for bicycle use. The rear brake has a change speed gear which provides extra power on hills, quick pick-up, and more speed. Photo shows fingertip controls. 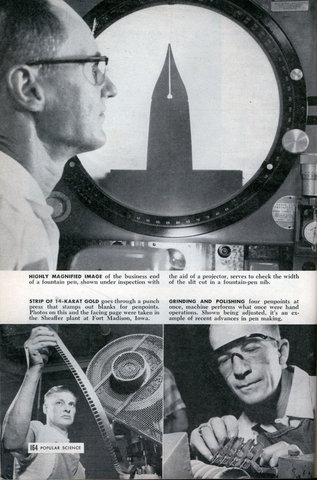 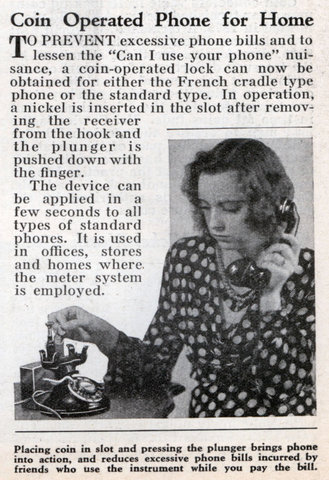 Coin Operated Phone for Home
TO PREVENT excessive phone bills and to lessen the “Can I use your phone” nuisance, a coin-operated lock can now be obtained for either the French cradle type phone or the standard type. In operation, a nickel is inserted in the slot after removing the receiver from the hook and the plunger is pushed down with the finger.
The device can be applied in a few seconds to all types of standard phones. It is used in offices, stores and homes where, the meter system is employed. 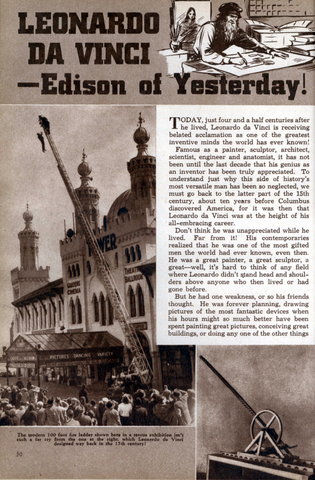 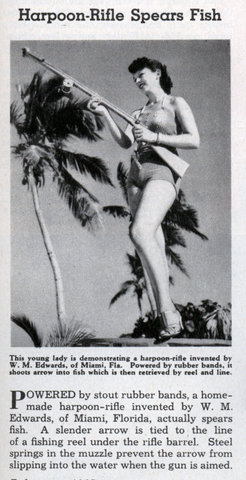 POWERED by stout rubber bands, a homemade harpoon-rifle invented by W. M. Edwards, of Miami, Florida, actually spears fish. A slender arrow is tied to the line of a fishing reel under the rifle barrel. Steel springs in the muzzle prevent the arrow from slipping into the water when the gun is aimed.

Science And Mechanics
Issue: Nov, 1934
Posted in: Ahead of its time, Science
4 Comments on Velocity of Light is Not Uniform (Nov, 1934)

The idea of a variable speed of light has been around for a while and is still an active area of research. However, I’ve always heard about it in regards to time frames measured in billions of years. I’m thinking that if the speed of light changed appreciably between 1911 and 1931 we might have noticed. 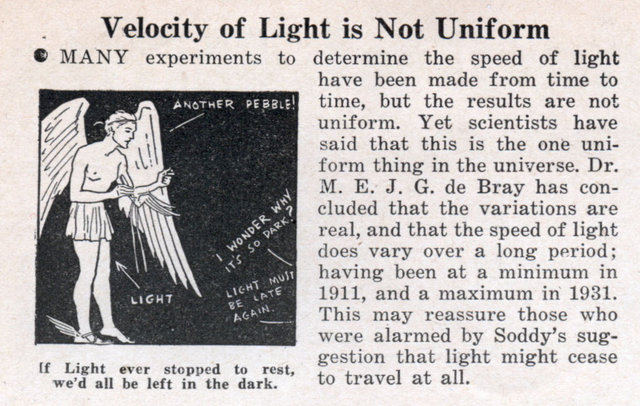 Velocity of Light is Not Uniform

MANY experiments to determine the speed of light have been made from time to time, but the results are not uniform. Yet scientists have said that this is the one uniform thing in the universe. Dr. M. E. J. G. de Bray has concluded that the variations are real, and that the speed of light does vary over a long period; having been at a minimum in 1911, and a maximum in 1931. This may reassure those who were alarmed by Soddy’s suggestion that light might cease to travel at all. 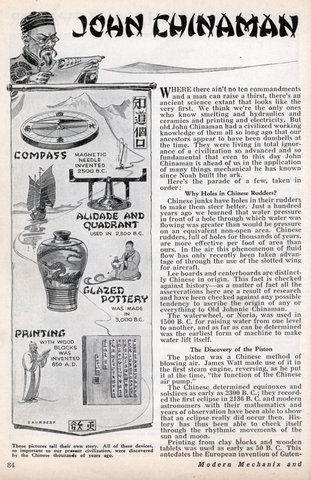