Paint with Your Fingers, Find Your Hidden Neurosis (Feb, 1947) 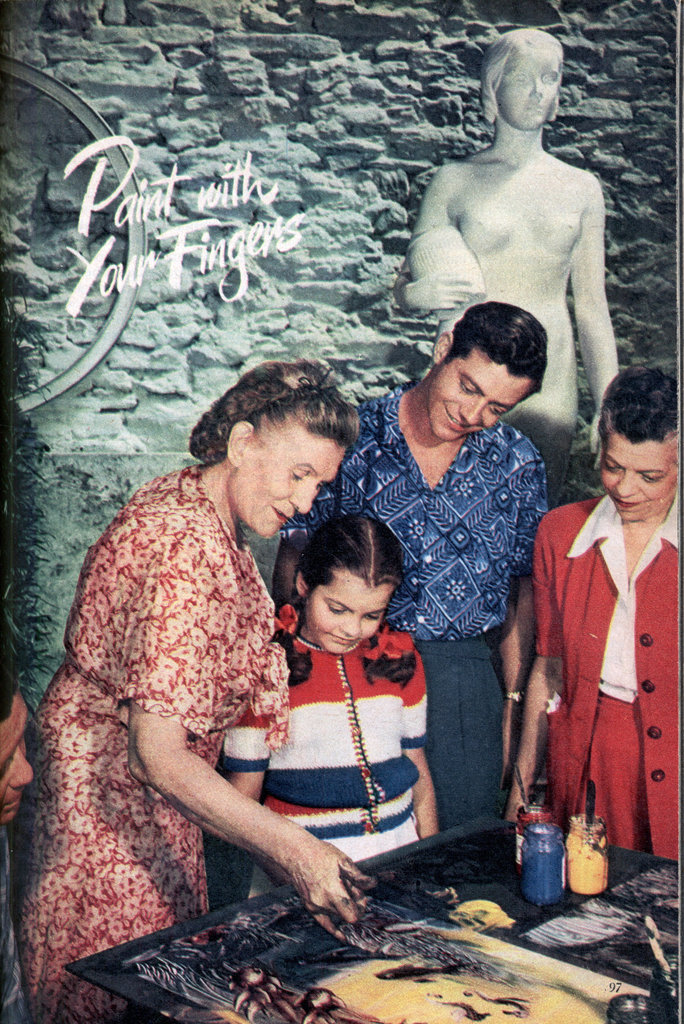 Paint with Your Fingers

You may not make masterpieces, but you’ll paint a picture of your hidden neurosis.

BECAUSE a clever school teacher invented a novel way to instruct her small pupils, psychiatrists now have a valuable new implement for ferreting out emotional disturbances and laying bare the innermost personality of the mentally ill.

Odd as it may seem, this important device is finger painting, the making of pictures by smearing paint on paper with fingers and hands. It was developed by Ruth Faison Shaw as a simple art form for children, but it turned out to be something far different and more potent.

Today some of the leading psychiatrists in this country are employing it regularly as an aid in diagnosing the more puzzling types of emotional and mental disorders. The prime objective of the physician is to get at the causes of the neurosis or psychosis, so any new device for that purpose is of importance, especially now, when a majority of the patients in veterans’ hospitals are suffering from mental or emotional illness.

Strange indeed are the facts that have been learned about the effects of finger painting on human beings. There seems to be an innate desire in peopleâ€”children and grown-ups alikeâ€”to smear. And there is a mysterious stimulus to the creative instinct in the smearing, for without training, without skill or artistic talent, people produce pictures that are surprisingly good.

But, more than this, they transmit to the painting without conscious effort any deep-seated emotional tensions they may have. The painter himself, if he is mentally disturbed, is always in the picture, though he may not be recognizable. He is usually the central, most noticeable figure. And the persons or feelings that are upsetting his emotional life are there also.

Most surprising fact of all is that mentally ill or emotionally disturbed persons have an urgent desire to explain the meaning of their paintings. Having finger-painted their problems and feelings on paper, they feel detachment from them, and willingly describe themselves by talking about the picture. Here is where the psychologist learns what he wants to know and gets a clearer picture of the patient’s personality than he might obtain otherwise, or only after weeks or months of skillful probing.

Miss Shaw, a school teacher from North Carolinaâ€”shown on first page demonstrating her techniqueâ€”is given full credit for bringing this valuable instrument to the attention and recognition of psychiatrists.

“Finger painting gives color and form to thoughts for which children often have no words,” says Miss Shaw. “By encouraging them to explain their pictures, the teacher is able to recognize the bogeys that torment them and then help to banish them from the child’s mind.”

Not only children, but adults as well, take to finger painting avidly and find the same relief from their nervous ten-sions and anxieties. And it is good for so-called normal people. The psychologists call it a mental cathartic. Since all of us have a creative urge, finger painting, because of its simplicity, gives us an outlet. There is no necessity for skill, training or artistic ability. You just take a blob of paint and start to work. All parts of the hands, fingers, wrists and even arms may be used, and the results are frequently, remarkable.

Paintings of very young children and of mentally deranged adults are alike in that they seem to make no sense; but adroit questioning and encouragement to explain bring out the fact that the incomprehensible forms do represent something in their minds. The methods is fully as useful when the painter is entirely inexperienced and unschooled.

A woman who had killed her husband and her rival and was confined in a hospital for the criminal insane was observed to make three crude human figures in all of her finger painting efforts. After a while she showed a desire to tell what the pictures meant. She herself was the central character and her two victims were always on either side of her. She said the two murdered people were always bothering her in her dreams and wouldn’t go away. After she painted their pictures she would wipe them off completelyâ€”her unconscious effort to get rid of them. After she had wiped them out this way many times they seemed no longer to trouble her. In her case, as in many others, the painting helped to diagnose her trouble and helped in curing her.

The things that mentally-disturbed people put in their paintings are not usually so simply explained as this, however. Some require the utmost skill and patience of the psychiatrist to interpret. The patient often puts in substitute figures or strange symbols for those he has in his mind. It is quite common for psychotics to substitute animals or fishes for human characters.

Alone in her New York studio late one afternoon, Miss Shaw received an unannounced visitor, a strange-acting young man who gave no sensible explanation for his presence. Finger-painting equipment lay spread on a large table, and, as he showed curiosity about it, she invited him to try his hand at it.

The boy made a few tentative smears and then began to make pictures with great eagerness and enthusiasm. He finished three of them without stopping, seeming to be completely wrapped up in this new form of self-expression. Miss Shaw recognized him to be a badly disturbed human being and started commenting, tactfully encouraging him to interpret them. Accustomed as she was to hearing people blurt out secrets after the stimulus of finger painting, she was scarcely prepared for what this boy told her.

One of the pictures was an underwater scene with some well-formed fishes and other figures that were not recognizable. She complimented him on his work, pointing out the fishes as being very good. Then, all of a sudden, he started to enlighten her, and what he told was a hair-raising story of crimes committed.

Four fishes in one group, he told the startled Miss Shaw, were four of his victims. The large fish swimming the other way was himself. He was escaping. The large number of almost formless figures were policemen searching for him. All this he related calmly as if he were talking about some other person than himself. The teacher recognized the crimes he described. They had stirred the city.

As simply as that, the young man confessed his guilt. With an effort the teacher kept outwardly calm, while mentally seeking a way to extricate herself from her precarious situation. Finally she persuaded the boy, a deserter from the Army, to report back to his unit and tell the story there.

While this was an unusually dramatic climax of a finger-painting experience, it was not out of the ordinary in Miss Shaw’s experience, except for the fact that serious crimes were revealed rather than more prosaic personal problems.

The finger-paint method is being used now in several Army and Navy hospitals where it has been found of much value as an outlet for nervous tensions and as a diagnostic technique in both mild and severe mental cases. Miss Shaw is now devoting her time exclusively to the problem of salvaging the unfortunate victims of the war. She has been engaged by Dr. Karl Menninger, superintendent of Winter Hospital, Topeka, Kansas, to assist in teaching the 300 psychiatrists who are to be trained there for duty in this and other veterans’ hospitals. All of these young doctors will learn the finger-painting technique from the school teacher who discovered it and brought it to the attention and recognition of the scientific world.