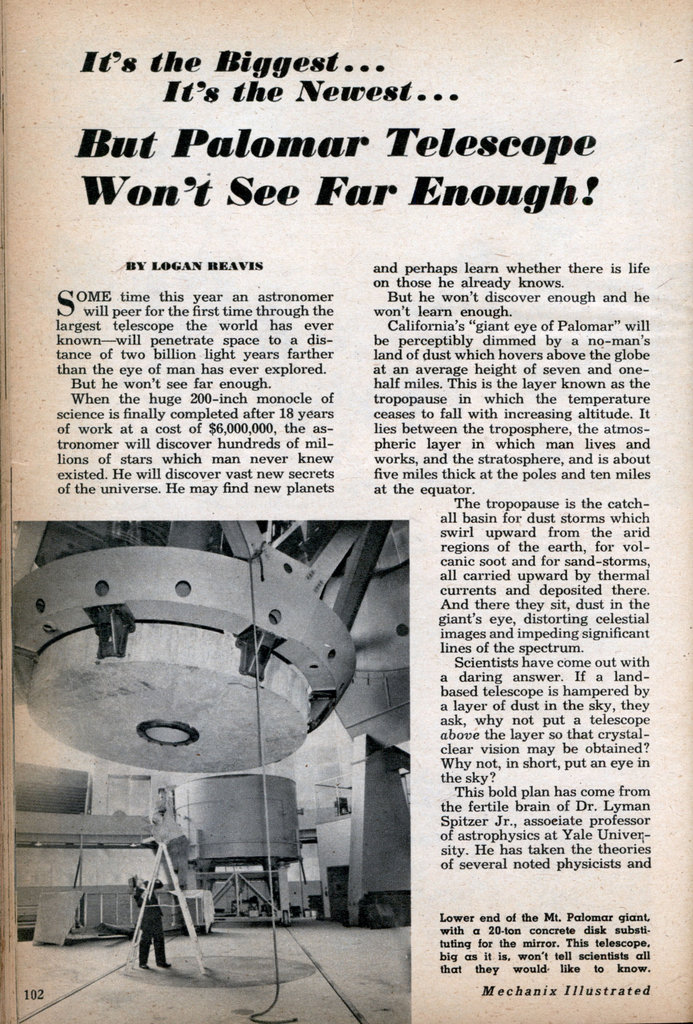 SOME time this year an astronomer will peer for the first time through the largest telescope the world has ever known—will penetrate space to a distance of two billion light years farther than the eye of man has ever explored.

But he won’t see far enough.

When the huge 200-inch monocle of science is finally completed after 18 years of work at a cost of $6,000,000, the astronomer will discover hundreds of millions of stars which man never knew existed. He will discover vast new secrets of the universe. He may find new planets — and perhaps learn whether there is life on those he already knows.

But he won’t discover enough and he won’t learn enough.

California’s “giant eye of Palomar” will be perceptibly dimmed by a no-man’s land of dust which hovers above the globe at an average height of seven and one-half miles. This is the layer known as the tropopause in which the temperature ceases to fall with increasing altitude. It lies between the troposphere, the atmospheric layer in which man lives and works, and the stratosphere, and is about five miles thick at the poles and ten miles at the equator.

The tropopause is the catchall basin for dust storms which swirl upward from the arid regions of the earth, for volcanic soot and for sand-storms, all carried upward by thermal currents and deposited there. And there they sit, dust in the giant’s eye, distorting celestial images and impeding significant lines of the spectrum.

Scientists have come out with a daring answer. If a land-based telescope is hampered by a layer of dust in the sky, they ask, why not put a telescope above the layer so that crystal-clear vision may be obtained? Why not, in short, put an eye in the sky ?

This bold plan has come from the fertile brain of Dr. Lyman Spitzer Jr., associate professor of astrophysics at Yale University. He has taken the theories of several noted physicists and * engineers and woven them, with his own, into a specific design for an artificial satellite circling the earth. He plans an observatory spinning about in space more than 22,000 miles above the earth’s surface, on which astronomical instruments could unravel the mysteries of the skies far more effectively than any post on this planet.

But first would come the problem of transporting the materials into space to construct the platform. How can the scientists get them up there, in view of the fact that more than 600 tons of the types of fuel known today are needed to move just one ton of material into space?

The answer symbolizes the age in which this startling project may become a reality: atomic energy, the only energy source powerful enough for that job.

Atomic energy would be the gasoline and—another scientific miracle—rockets would be the moving vans! Rockets, carefully insulated from suspected high temperatures in the upper realm of the stratosphere, would tow the prefabricated parts upward for assembly “on the spot” in the stratosphere. Let’s have a closer scrutiny of the astral outpost, illustrated in detail on pages 104-105.

Completely assembled, it is 194 feet in diameter and consists of a circular platform upon which is mounted two huge telescopes, a motor and generator, camera, radio and television equipment, living quarters and a vast assortment of scientific instruments to observe and record astronomical phenomena.

The platform spins in an easterly direction at a speed approximating the rotation of the earth, 1,080 miles per minute. This speed must be maintained in order to create, through centrifugal force, the equivalent of earth’s gravity.

The motor which drives the satellite lies in the vertical axis and spins the entire structure through connecting spokes. Energy is obtained from steam which is created when the great circular mirror shown above the platform concentrates the sun’s rays upon water in the pipes in the lower part of the structure.

The main telescope for observation of the skies stands on a turntable atop the platform while a smaller one, whose chief purpose is examination of the earth’s surface, is attached to the lower platform. The 200-inch reflector of the larger “eye,” supported by a high carriage, is permitted an extraordinary fore and aft sweep of some 240 degrees, limited only by the periphery of the mirror. This action is facilitated by a gear train in the trunnion assembly and the depth of the front and rear yokes. The instrument can be swung completely around, forward and backward. The turntable permits circular movement, while a forward yoke and a rear worm gear acting on rollers permit back and forth action.

The tower in back of the main ‘scope contains the coelostat and a coronograph used in solar observations. From the mirror, the sun’s image is reflected to the base and again reflected to the inconoscope of a television camera. The televised image is then carried directly to a projection room below, where it appears on a screen.

The smaller telescope would prove invaluable in relaying back to earth information observed on weather conditions of all sorts, and ship and plane movements. It is easy to see how important this would be in time of war. Location of enemy troops, planes and vessels could be spotted and speedily passed on to headquarters.

The instrument in the right central portion of the platform, resembling somewhat a military mortar, is a great camera inspired, in principle, by the present-day “super-Schmidt” camera designed by Harvard University’s Dr. James G. Baker. It is remotely controlled from inside the platform and will be used in record- ing rocket and meteor flights and other astral phenomena which flash by so speedily that the human eye cannot observe them.

Inside the platform, located on various levels along the rim, are the living and working quarters for members of the satellite’s crew. These quarters are compartmented so that a measure of safety can be provided if some part of the platform is sheared away by flying meteors.

They look like weird men from other planets, these crew members of the observatory in the sky. Encased in bulky, electrically heated “breathing suits,” they tread cautiously in their well-nigh weightless world. Security lines connect them at all times with the central airlock in the bowels of the satellite, which supplies life-giving oxygen to all on board. When they emerge from the interior and prowl atop the platform, they proceed by means of hooks.

This, then, is the answer of science to the limitations of the Palomar telescope. Weird, startling, unbelievable? No, answers science. Not half so unbelievable as the myriad or wonders which the age of the atom will eventually bring. •