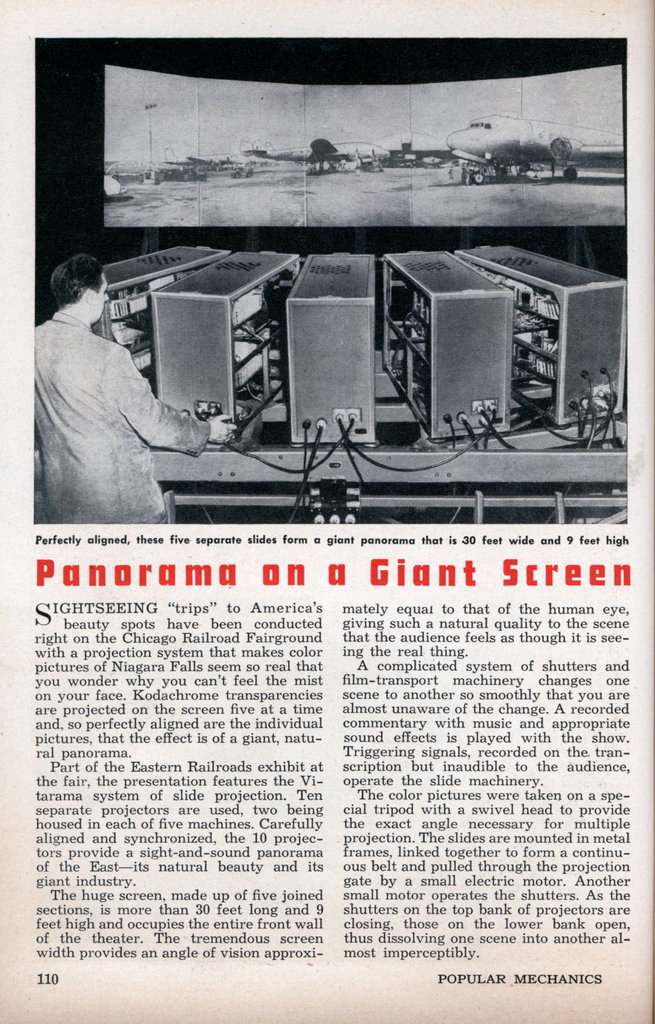 Panorama an a Giant Screen

SIGHTSEEING “trips” to America’s beauty spots have been conducted right on the Chicago Railroad Fairground with a projection system that makes color pictures of Niagara Falls seem so real that you wonder why you can’t feel the mist on your face. Kodachrome transparencies are projected on the screen five at a time and, so perfectly aligned are the individual pictures, that the effect is of a giant, natural panorama.

Part of the Eastern Railroads exhibit at the fair, the presentation features the Vitarama system of slide projection. Ten separate projectors are used, two being housed in each of five machines. Carefully aligned and synchronized, the 10 projectors provide a sight-and-sound panorama of the Eastâ€”its natural beauty and its giant industry.

The huge screen, made up of five joined sections, is more than 30 feet long and 9 feet high and occupies the entire front wall of the theater. The tremendous screen width provides an angle of vision approximately equal to that of the human eye, giving such a natural quality to the scene that the audience feels as though it is seeing the real thing.

A complicated system of shutters and film-transport machinery changes one scene to another so smoothly that you are almost unaware of the change. A recorded commentary with music and appropriate sound effects is played with the show. Triggering signals, recorded on the. transcription but inaudible to the audience, operate the slide machinery.

The color pictures were taken on a special tripod with a swivel head to provide the exact angle necessary for multiple projection. The slides are mounted in metal frames, linked together to form a continuous belt and pulled through the projection gate by a small electric motor. Another small motor operates the shutters. As the shutters on the top bank of projectors are closing, those on the lower bank open, thus dissolving one scene into another almost imperceptibly.